With new variants of severe acute respiratory syndrome coronavirus 2 (SARS-CoV-2) emerging, the coronavirus disease 2019 (COVID-19) pandemic is far from over. While the global vaccine rollout has moved at an impressive speed, the search for new safe, effective, and targeted therapies is still on.

Now, a new study in Biomedicine and Pharmacotherapy reviews the potential for curcumin, a natural alkaloid derived from turmeric, and nanosystems to treat COVID-19. 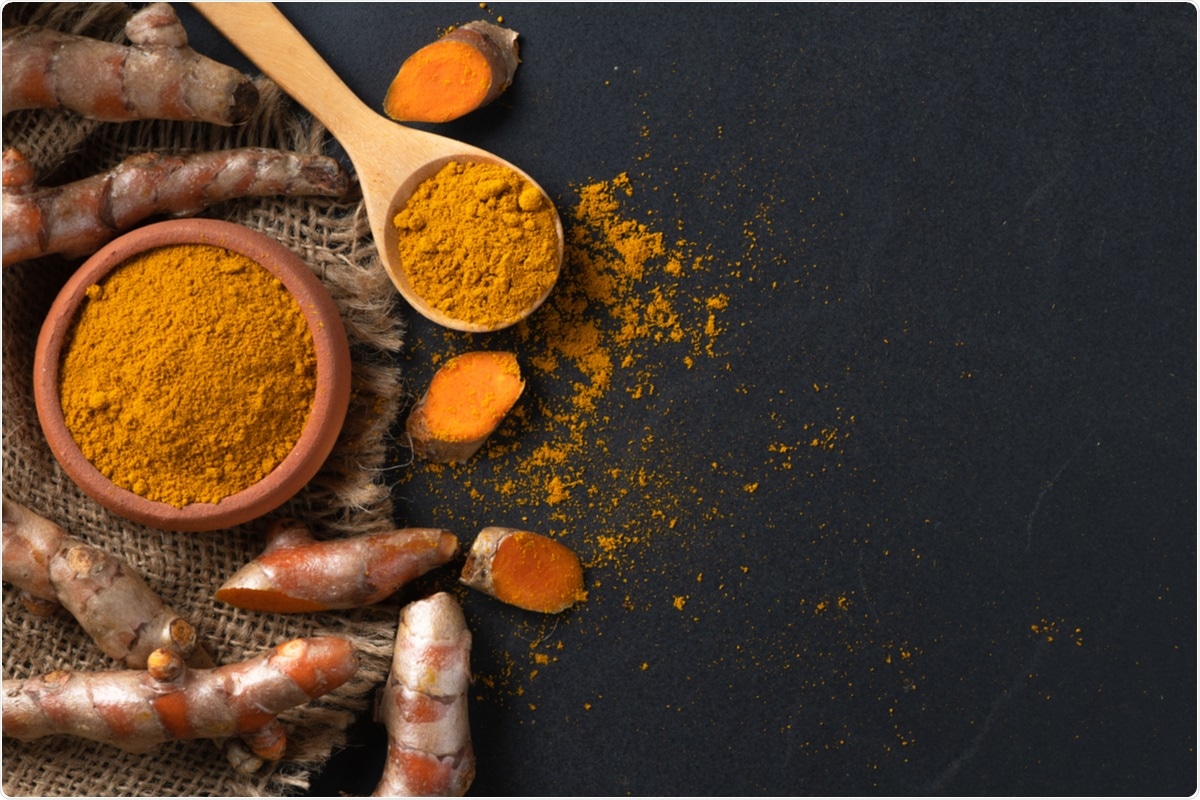 The need for therapeutics

COVID-19 is caused by infection with the novel SARS-CoV-2 pathogen, which engages and enters host cells through its spike protein. At present, there are more than 138.3 million documented cases globally, with the death toll nearing three million.

Though vaccines have been approved for emergency use, their efficacy against some of the new variants has been questioned. Moreover, vaccination coverage of at least 70% of the population in all the countries of the world is likely to take a long time, considering the current pace of vaccination, the shortfall in vaccine production, and logistical challenges.

The world will still need effective and safe drugs, therefore, to intervene in serious illness caused by this virus. The current review focuses on the individual and synergistic activity of curcumin and nanostructures against the virus.

Curcumin is a polyphenolic compound isolated from the rhizome of the turmeric plant, Curcuma longa. It makes up the major curcuminoid in this plant, at 77% of the total, while the minor compound curcumin II makes up 17%, and curcumin III comprises 3%.

Curcumin has been characterized and studied thoroughly, as a natural molecule with medicinal properties. Its tolerability and safety have been well documented, with a maximum dose of 12 g/day.

Its uses have been described as anti-inflammatory, anticancer, and antioxidant, as well as antiviral. Curcumin has been suggested as a molecule with the potential to heal pulmonary edema and other injurious processes that lead to lung fibrosis following COVID-19.

This is thought to be due to its ability to inhibit the virus itself, as well as to modulate inflammatory pathways. It regulates viral transcription and regulation, binds with high potency to the viral main protease (Mpro) enzyme that is key to replication and inhibits viral attachment and entry into the host cell. It may also disrupt viral structures.

Its range of antiviral targets includes the hepatitis C virus, the human immunodeficiency virus (HIV), the Epstein-Barr virus and the influenza A virus. It has been reported to inhibit the 3C-like protease (3CLpro) more effectively than other natural products, including quercetin, or drugs like chloroquine and hydroxychloroquine.

This could allow the reduction of viral loads within the human cell much more rapidly than other less inhibitory drugs, and thus prevent disease progression to acute respiratory distress syndrome (ARDS).

It also inhibits papain-like protease (PLpro) with a 50% inhibitory concentration (IC50) of 5.7 µM that surpasses quercetin and other natural products.

The virus attaches to the human host target cell receptor, the angiotensin-converting enzyme 2 (ACE2). Modeling studies have shown that curcumin inhibits this virus-receptor interaction in two ways, by inhibiting both the spike protein and the ACE2 receptor.

However, curcumin has low bioavailability, because it does not dissolve well in water and is unstable in aqueous media, especially at higher pH. When orally administered, it undergoes rapid metabolism by the gut and the liver. This obstacle may be overcome by using nanosystems.

Many different nanostructured carriers may be used for this purpose, such as nanoemulsions, microemulsions, nanogels, micelles, nanoparticles and liposomes. Such carriers prevent the metabolic breakdown of the curcumin, increases its solubility and help it move through biological membranes.

Three or more nanostructure-based curcumin products are already commercially available, but few studies have examined their efficacy against COVID-19 in vivo. These showed the ability of the formulations to modulate immune responses and to reduce the symptoms of the disease, and perhaps hasten recovery.

Nanoparticles (NPs) are one category of nanostructures that can be functionalized with ease, and have a wide potential range of materials and structures. This could allow them to be designed for specific viral targets within and outside the host cell. The addition of functional groups on the surface of the nanoparticles, such as antibodies, heparin and sugars, can enlarge the range of activity of the nanoparticle.

NPs act in many ways, such as inactivation of the viral particle, inhibition of viral attachment and entry, and preventing viral replication. Depending on the functional group and the type of NP used, they can alter the viral capsid structure and thus reduce the viral load.

By interacting with the SARS-CoV-2 spike, they can inactivate the virus, as shown earlier with metallic NPs, both preventing spike-ACE2 binding, and viral internalization. The occurrence of electrostatic interactions between charged NPs and the virus abolishes the effective charge on the latter, causing viral aggregation.

With viral particles within the cell, the NPs can engage the viral RNA and prevent replication, followed by viral propagation to neighboring cells.

Thus, curcumin may inhibit viral targets, while the NPs may enhance the blockade on virus entry or use other inactivation mechanisms, depending on the functional group.

Earlier studies show that silver NPs loaded with curcumin led to increased antiviral activity compared to either curcumin or silver NPs in isolation, with reduction of cell-cell fusion and syncytium formation. Curcumin-carbon dots are another option found to be effective in inhibiting entry by the porcine epidemic diarrhea virus, again a coronavirus.

These findings indicate the potential for the investigation of both curcumin and nanosystems for the treatment of SARS-CoV-2. Further studies are needed to validate the anti-SARS-CoV-2 activity of both these molecules, and their efficiency and synergism in vitro and in vivo, followed by clinical trials. Curcumin-NP formulations may be at the forefront of such investigations since they are already approved for therapeutic use.