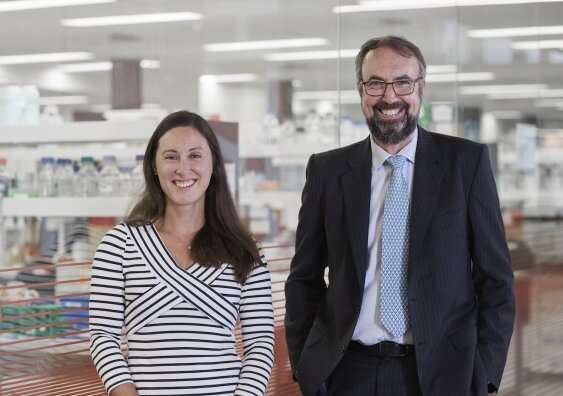 UNSW researchers have used CRISPR gene editing—a type of “molecular scissors”—to understand how deletions in one area of the genome can affect the expression of nearby genes. The work, led by UNSW Associate Professor Kate Quinlan and Professor Merlin Crossley, together with collaborators from the US, will help researchers investigate new therapeutic approaches for one of the world’s most devastating genetic blood disorders—sickle cell disease.

The team’s findings are published today in academic journal Blood. Just last week, A/Prof. Quinlan and Prof. Crossley received a $412,919 ARC linkage grant to fund a collaboration between UNSW Sydney and CSL that follows on from the work described in this paper.

Genetic mutations—specifically, a defect in the adult globin gene—are responsible for the disorders. The mutant genes affect the production of hemoglobin, the protein in red blood cells that carries oxygen around our bodies.

“Interestingly, when children are born, they don’t show disease symptoms at first, even if they have the mutations, because at that stage, they’re still expressing fetal globin and not yet adult globin. That’s because we have different hemoglobin genes that we express at different stages of development,” says A/Prof. Quinlan.

When that happens, the red blood cells take on unusual, sickled shapes and block small blood vessels, causing pain, organ damage, and premature death. The disease is particularly common in tropical countries, and in people from places where malaria is endemic.

“The goal of our research is finding out how we can reverse the fetal to adult globin switch, so that patients continue to express fetal globin throughout life, rather than the mutant adult globin genes that cause blood cells to become stiff and block vessels,” says A/Prof. Quinlan.

Interestingly, this already happens in some people with sickle cell disease: thanks to another, beneficial genetic mutation, a rare subset of patients keeps the fetal globin gene ‘on’ throughout their life and are protected from sickle cell symptoms.

“In these patients, the persistent expression of fetal globin effectively compensates for the defective adult globin—but up until this piece of research, we didn’t really understand the process that led to this incredible advantage,” A/Prof. Quinlan says.

To get to the bottom of what’s going on in these lucky people’s genome, UNSW Ph.D. student Sarah Topfer compiled data on the rare families that express fetal globin throughout life.

Sarah then used CRISPR gene editing to replicate some of these big patient deletions—and the small deleted bit they all had in common—in cell lines in the lab.

“CRISPR allows us to ‘cut’ bits of DNA out of cells grown in the lab, to modify genes and see what happens as a result—it’s essentially a tool to figure out what genes do inside living cells,” A/Prof. Quinlan says.

“We found that deleting just that one little bit was sufficient to make fetal globin go up and adult globin down—which suggests that we have found the key mechanism that can explain why fetal globin levels remains high in these asymptomatic patients,” A/Prof. Quinlan says.

“It was surprising to see the findings—many people have studied these mutations for many years, so the idea that there’d be one unifying hypothesis that could explain them rather than them all working through different mechanisms will be surprising for the field.

“While we went in with the hypothesis that there might be one mechanism, we didn’t expect it to come out so cleanly—we thought that perhaps it would be more complicated than what we’d initially thought.”

The CRISPR revolution and potential therapies

Co-lead author Prof. Crossley, who is also UNSW’s Deputy Vice-Chancellor, Academic & Student Life, says it was impossible to test this model prior to the advent of CRISPR gene editing.

“Our group has specialized in using this new technology to understand globin gene switching,” Prof. Crossley says. “Australia now has a significant number of people with either sickle cell disease or thalassemia.

“The work, supported by the National Health and Medical Research Council, is an important example of how the CRISPR gene editing revolution is accelerating scientific understanding and will deliver new therapies to the clinic.”

The scientists say the work revealed today is improving our fundamental understanding of the mechanism behind sickle cell disease.

“What this really helps us to do is understand this process of turning off fetal globin and turning on adult globin and how we could reverse that, so that we can use this understanding of the mechanism to help us look for new therapeutic approaches—it’s a key piece of the puzzle,” A/Prof. Quinlan says.

Some of Prof. Crossley’s team’s previous discoveries in the field are informing clinical trials already—by using beneficial mutations they’ve discovered in the past that could lead to therapies for these disorders.