COVID: Why are people testing positive on lateral flow tests then negative on PCR?

In the UK over the last few weeks, there have been a growing number of reports of people testing positive for COVID on a lateral flow test (LFT) but then negative on a polymerase chain reaction (PCR) test. This stands out because we’ve been led to believe that PCR tests are the “gold standard” and LFTs are crude mass-testing devices—that PCRs should pick up cases LFTs miss, not the other way around.

A number of explanations have been put forward. Some have suggested a faulty batch of LFTs could be causing people to test positive when they don’t have COVID. Others have hypothesized a new variant could be circulating that isn’t detected by the standard PCR test. There have also been well-publicized stories of children faking a positive LFT result using the acidic properties of soft drinks. These spoofers would subsequently test negative on a follow-up PCR test.

The increase in these events also coincides roughly with the return of schools and big rises in the number of cases in children. These positive-then-negative sequences of tests might be something to do with the way children are being tested. Alternatively, vaccination may have changed where exactly in the body virus grows best, meaning different swabbing techniques used for different tests types are capturing more or less of the virus.

But there’s also a potential mathematical explanation, given neither test is 100% reliable. It’s all down to how often these tests give false positives and negatives.

Despite their reputation for inaccuracy, if you test positive on an LFT, the overwhelming likelihood is that you have COVID. As the diagram below shows, upwards of 96% (7,000/7,297) of people testing positive on LFTs at the moment will be true positives.

This is largely because LFTs are very “specific”—they don’t give many false positives. Public Health England (now the UK Health Security Agency) has estimated that for every 10,000 LFTs taken by genuinely COVID-negative people, there will be fewer than three false positives (a specificity of 99.97%).

These can add up though. In a population of 1 million people where 1% have COVID, 297 people will have LFTs tell them they have the virus when they don’t. And because PCR tests are (almost) 100% specific, when they follow their LFT with one of these, they’ll then definitely get a negative result. This could explain some of what’s been recently reported.

But this is only one half of the accuracy question. LFTs have a gained their bad reputation because of their low “sensitivity”—meaning they have a high rate of false negatives. Estimates vary, but perhaps around 30% of the time when someone has COVID, an LFT won’t pick this up. PCR tests are much better, with a false negative rate of only 5%. 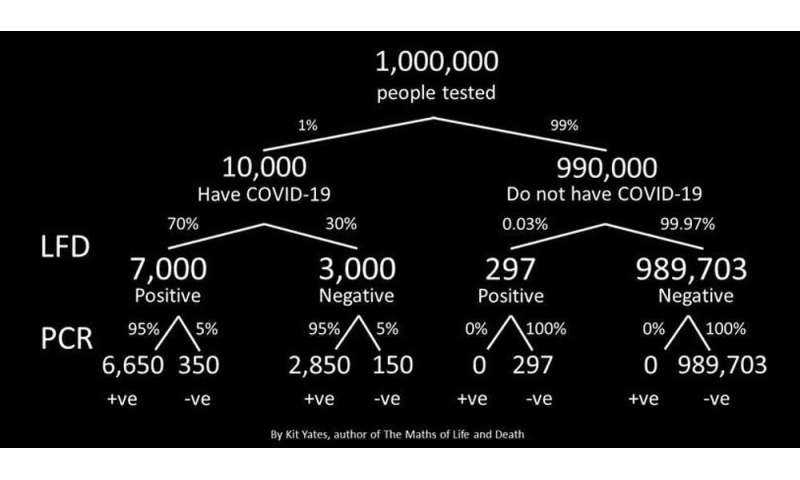 But this 5% false negative rate can also lead to a positive-then-negative testing sequence. As the diagram above shows, with the current prevalence of COVID, 7,000 of our 1 million people will correctly be flagged as having COVID by an LFT. Of these, 5%—so 350 people—will then get an incorrect false negative from their “confirmatory” PCR test.

It’s important to remember that because of their high specificity, you can be pretty confident that a positive LFT result is genuine—in our model above, for every 7,000 that are right, only 297 are wrong. And even if your positive result is followed by a negative PCR test, it’s currently more likely that you have COVID than don’t (350 vs 297). And if you’re symptomatic, the chance of being infected if receiving a positive LFT followed by a negative PCR is even higher.

There are a few further things to note here. The first is that the rate of infected people testing positive on an LFT and then negative on a PCR test is around 3.5% (350 out of 10,000). This is perhaps higher than we might expect, given the bad rep of the LFT and the “gold standard” status of PCR tests. This may explain why reports of this positive-negative testing sequence seem to be swelling in number.

When something that we believe to be very unlikely happens to us, then we tend to try to make sense of our experience by sharing it with others. Reports of positive LFTs followed by negative PCR tests have been flooding Twitter in recent days and making national news, which in turn has caused more people to come forward. It’s possible that part of the increase in reports of this perceived-to-be-unusual event are actually the result of this positive feedback loop.

A second thing to note is that how well (or poorly) LFTs and PCRs perform overall and relative to each other depends on how prevalent COVID is in the community. In the calculations above, I’ve been conservative and assumed that 1% of people have COVID—the Office for National Statistics estimates that currently it’s actually nearly 1.5% of people.

But if this falls, everything changes. The percentage of people testing positive on LFTs who are true positives will drop and at the same time, the number of positive LFTs followed by negative PCRs will also plunge. If the prevalence of COVID increases, the opposite would happen: we’ll see even more of these “surprising” testing sequences than currently.

It’s important to emphasize that there’s no strong evidence yet for any of the hypotheses advanced in this article. But understanding whether there’s something truly wrong or whether this is just a mathematical artifact has significant ramifications—for testing, contact tracing and the monitoring of the UK’s current COVID situation.

The UK Health Security Agency’s (UKHSA) chief medical adviser, Susan Hopkins, has noted that the organization is looking into the issue. The UKHSA acknowledges that it doesn’t have an explanation as yet but is investigating because it has “not experienced this before to such a degree.”