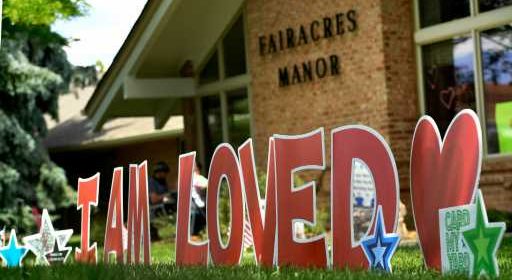 While Fairacres Manor in Greeley was in full-blown coronavirus outbreak mode in late March, with its precautions and preventative measures on full tilt, state inspectors visited to zero in on infection-control practices.

The March 31 inspection was part of what became an all-hands on deck effort by the Colorado Department of Public Health and Environment in April and May to inspect all 232 nursing homes in the state for pandemic preparedness.

What was found at Fairacres was not out of the ordinary during the state’s hyper-focus on infection controls.

The inspectors that afternoon found a number of violations, according to copies of those reports. On four occasions, certified nursing assistants passed dinners to room-bound residents but failed to offer them a chance to wash their hands.

Additionally, inspectors noted that some staffers were not wearing eye protection in areas where additional precautions were required. They also cited the facility for using uncovered cardboard boxes in a resident hallway for trash and used linens, instead of sealable plastic biohazard containers. A staffer told inspectors they had run out of the plastic ones earlier, but more became available, so they were switched out.

Fairacres acknowledged the findings and pledged to correct them, saying some went against training. But it also has maintained its staff was being as vigilant as humanly possible during the unprecedented situation.

In early March, federal regulators had allowed state oversight agencies to pause most regular inspections to focus on infection-control and abuse complaints. The health department on its own began an aggressive drive to visit all nursing homes, achieving that goal in May before shifting to other types of residential-care facilities, including assisted-living homes.

Weekly reports summarize the most common citations: not following guidelines on the use of personal protective equipment, or PPE, or failing to stock enough; failures by staff to follow proper hand-washing or hygiene procedures; missing face-coverings on residents; and lax social-distancing practices or visitor-screening.

Randy Kuykendall, director of the Colorado Department of Public Health and Environment’s Health Facilities and EMS Division, called any citations on the infection-control front concerning.

But he said the average inspection found fewer violations than are typical for such visits.

“It’s a little lower than I expected,” he said. “I think that’s a tribute to the energy and the efforts that our providers are putting into it. I think any tags, though — in this environment — are dangerous.”

The nursing-home industry pushed back against Colorado’s newly urgent approach to inspections. Doug Farmer, president and CEO of the Colorado Health Care Association, lodged a complaint to Gov. Jared Polis and state public health leaders in a May 19 letter about what he portrayed as over-aggressive inspections, especially when it came to dinging facilities for reusing some PPE proactively while new supplies were hard to find.

At the same time, he said, facility directors were receiving conflicting guidance on different matters — including PPE use and whether residents could socialize outside — by federal, state and suddenly hyper-interested local authorities.

“You had these conflicts where there were two or three different pieces of guidance, and two of them were in conflict with each other,” Farmer said in an interview.

The letter spurred discussions between state government officials and providers about better ways to clear up such questions, he said, and the state health department clarified that its intent had not been to cite every violation possible.

The Centers for Medicare & Medicaid Services at the start of June ordered states to perform infection-control inspections at all nursing homes by the end of July — regardless of whether they’d done so already, as Colorado had.

So CDPHE was gearing up to visit all nursing homes again, Kuykendall said earlier this month.