Comparison of status quo with universal health care suggests 330,000 in US died needlessly during pandemic 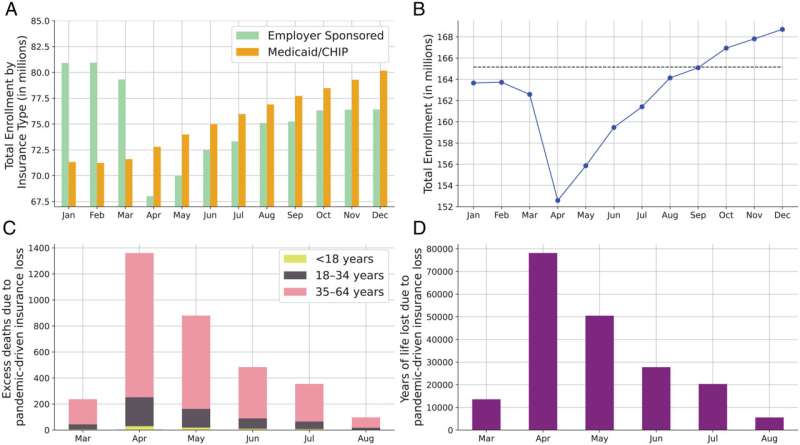 A team of researchers at the Yale School of Public Health, working with colleagues from the University of Massachusetts Amherst, the University of California, San Francisco and the University of Florida, has found evidence that suggests hundreds of thousands of lives could have been saved during the pandemic if people in the U.S. had been covered by a universal health care system. In their paper published in Proceedings of the National Academy of Sciences, the group outlines their estimates of deaths that could have been prevented during the pandemic and the possible cost savings if the U.S. had a universal health care system.

Prior research has shown that the American system of providing medical insurance to its populace leads to many preventable deaths. Most health insurance in the U.S. is employer-provided—those who are unemployed or who work for entities that do not offer health insurance have a higher likelihood of illness and death than do those who have insurance. In this new effort, the researchers analyzed the number of people who died in the U.S. of COVID-19 due to a lack of insurance during the pandemic.

The researchers used existing data to compare the mortality risk for people with or without insurance—and also their risk of dying from anything else. They then used population characteristics of people in general who had no insurance to determine their likelihood of dying compared to people who did have insurance. Next, they used the data they had compiled to estimate how many people died of COVID-19 through March 2022 because they had no insurance. They found that approximately 338,000 people could have been saved during the pandemic if they had had access to insurance through a universal health care system.

The researchers also analyzed other data sources to calculate the cost of implementing a universal health care system in the U.S. and the savings it could provide. They found that the savings would come to approximately $438 billion a year in non-pandemic years and would have been $459 billion in 2020.