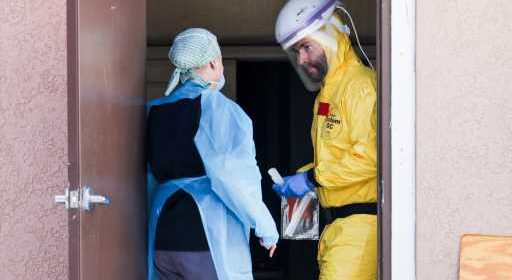 When Dwayne Smith started as administrator of Elbert County Public Health in January 2020, he assumed he’d spend most of the year working on the community’s health needs assessment.

That quickly became irrelevant, as the COVID-19 pandemic created urgent new needs that the department wasn’t staffed to meet.

Public health departments around the country have struggled with the need to provide additional services — such as tracing the contacts of their residents who contract the coronavirus — with little room in their budgets, and the problem is especially acute for small ones.

Other than Smith, the Elbert County department has one full-time employee, who normally focuses on inspecting restaurants and septic systems. The agency also was able to hire a part-time contact tracer, who can handle about 10 cases per day, Smith said. It’s not unusual to get three dozen cases in a day, though.

“It’s what we can afford,” Smith said. “We’ve been doing all that we can with the tools and resources in the toolbox, but unfortunately the toolbox is pretty empty.”

Colorado’s public health spending was essentially flat from 2010 to 2019, decreasing by 2% after adjusting for inflation, according to an analysis by the Associated Press and Kaiser Health News. Local health department staffing also decreased by 1%. Many states fared worse, as governments at all levels cut funding for public health.

“For at least a decade, we’ve been divesting in public health,” said Kimberly Boyd, president of the Colorado Public Health Association’s board.

While no one could have known how the pandemic would develop, Colorado could have done more to help local health departments prepare, Boyd said.

For example, one county didn’t have a way to track COVID-19 testing and had to find a volunteer to make a Google spreadsheet, and the state didn’t have a system for tracking which departments needed a temporary staffing boost, she said.

“There was not the hard(ware) or software in a lot of places,” she said.

Jobeth Mills, director of Lincoln County Public Health, said two of the department’s four full-time employees are working on COVID-19, and they rely on two part-time employees to do contact tracing. Salaried employees haven’t been able to take time off since the virus arrived in Colorado, she said.

“The overtime that’s been put in has been crazy,” she said.

A statement from the Colorado Department of Public Health and Environment said the state has teams available to assist with testing and contact tracing, if local health departments ask for help. The state also activated a task force to help administer vaccines, if needed.

“The state has worked extensively with — and will continue to work with — local partners to meet community testing needs in a manner that best serves Coloradans,” the statement said.

Dawn James, director of Kit Carson County Public Health, said she’s been working longer hours and filling in when no one else is available for frontline work, but the situation could be worse.

The county’s Board of Health agreed to let employees roll over vacation that they couldn’t use last year, and the department had hired another public health nurse just before the pandemic hit, she said. The nurse was supposed to coordinate the department’s chronic disease, addiction and senior health programs in January 2020, but quickly pivoted to work on COVID-19.

“The timing was pretty good that way,” she said.

Smith, in Elbert County, said he hasn’t had the same good fortune in recruiting. The department has been trying to hire a public health nurse, but they’ve only had one applicant since July, and that person turned it down because the work schedule didn’t seem like a good fit.

Nurses have plenty of job options, and most pay more than public health, Smith said.

Tri-County Health Department has helped administer vaccines and taken some of the load by helping with emergency planning and the Women, Infants and Children nutrition program, Smith said. It also helps that Elbert’s highest population areas are near Douglas and Arapahoe counties, so residents can get tested at sites there, he said.

“We would be even in more dire straits without the support provided by Tri-County Health Department,” he said.

James, from Kit Carson County, said there are some advantages to being small. Frontier health departments knew they’d be on their own in the case of a natural disaster, so they’re prepared to get by without outside help, she said. They have a corps of volunteers they’ve called on to assist with non-medical tasks, like checking in patients at a vaccination clinic.

“We’ve always been taught to be self-sufficient for 72 hours before help is coming,” she said. “I think that’s helped us.”

Staffing isn’t the only source of stress in local health departments.

In some cases, the local departments find out about policy changes in the same way the general public does, from the governor’s news conferences, Boyd said. That’s a problem both because the policies may not work well for local departments, and because they won’t know how to answer questions from the public, she said.

The state health department said it has 10 calls each week with “local partners,” as well as one with hospitals. In a statement, the department says it and Gov. Jared Polis’s office also have other calls as needed.

“This is a rapidly evolving situation, and as we receive new information, we do our best to make sure and provide it to local public health agencies, who are serving a critical role in this pandemic,” the statement said.

The problem can be bigger than a disconnect with elected officials.

Nationwide, at least 49 heads of public health departments had resigned or been fired as of August, according to the Associated Press and Kaiser Health News. Some of those who left cited harassment from the public, including death threats, and a lack of support from elected officials for measures like mask mandates.

In Colorado, six local health department heads had resigned or been fired as of June, and the executive director of Boulder County Public Health announced late last year that he would retire in April. The head of the Colorado Association of Local Public Health Officials also stepped down in December, saying that she, like others, was burned out by constant opposition.

Public health nurses and administrators are dealing with a sometimes threatening backlash while trying to do their jobs without enough support and resources, Boyd said. She expects more will quit in the coming months and years, especially if they don’t get mental health support, she said.

“We see a really unprecedented amount of local directors who are retiring, or have left early, or have been asked to step down,” she said.

Lincoln County officials haven’t been hostile to the health department, but they also haven’t shown much interest in enforcing measures like the statewide mask mandate, Mills said. That puts the onus on the health department, whose employees are already dealing with the strain of seeing their neighbors get sick or lose jobs, she said.

“I didn’t want to be in law enforcement,” she said. “That’s not why I went into public health.”