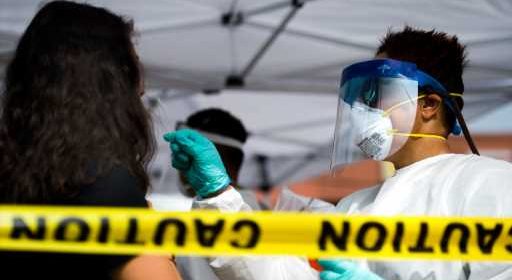 More Coloradans were hospitalized for COVID-19 on Monday than at any time since late April, as the state’s modelers warned that reality keeps proving their projections for this fall weren’t pessimistic enough.

New cases also rose last week, with 13,799 infections reported during the week ending Sunday. It was the second week in a row with more than 10,000 new cases, after delayed reports were added to the week of Oct. 25.

The percentage of tests coming back positive over the last three days exceeded 9%, meaning the increase in cases can’t simply be attributed to more people getting tested, and the state may be missing infections. The goal is to keep that positivity rate below 5%.

A model projected Colorado could exceed the April peak in the second week of November, but new hospitalizations have continued to rise faster than expected, said Beth Carlton, an associate professor of environmental and occupational health at the Colorado School of Public Health. COVID-19 hospitalizations may exceed the peak this week, she said.

“We keep hoping things will turn around,” she said. “If anything, the numbers look slightly worse.”

The model, developed by the state health department and the School of Public Health, projected Colorado could run out of intensive-care beds in January, but that didn’t account for the rate of new hospitalizations accelerating.

Hospital capacity isn’t the only concern, though, Carlton said. As more people are infected, it becomes harder to trace everyone’s contacts, meaning more people could unknowingly go on to infect others, she said.

Gov. Jared Polis held off on issuing any new state orders in response to the worsening conditions, but said he met with White House coronavirus response coordinator Dr. Deborah Birx on Monday, and she appealed to residents to avoid socializing with people from other households for at least a few weeks.

“We are seeing very alarming, concerning trends in Colorado,” Polis said. “Three days in a row with more than 2,500 cases. Remember, six weeks ago we had 300 and 400 cases a day.”

Coronavirus deaths were at their highest level since mid-June, with 49 reported in the week ending Oct. 25. Reports can take up to two weeks to come in, so last week’s total likely will rise from 23.

It’s not clear why this wave is so much more severe than one that followed Independence Day, but public fatigue, lack of leadership at the national level and the changing seasons could be factors, Carlton said.

The continued growth in infections could make traditional Thanksgiving gatherings particularly dangerous, especially if older and younger people are mixing, Carlton said. It’s safest to avoid gathering indoors, especially if not everyone will wear a mask, she said.

“Interacting with people right now is very risky,” she said.