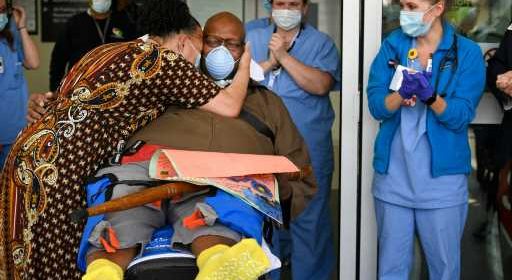 COVID-19 hospitalizations in Colorado have dropped for more than week as the number of new coronavirus infections continues to decline as well.

The Colorado Department of Public Health and Environment reported 578 people were hospitalized with confirmed or suspected COVID-19 as of Monday afternoon, down from the most recent peak, on May 8, of 731. It was the lowest total since April 19, but still more than 200 more hospitalizations than at the previous low point in mid-March.

The state recorded 7,009 new cases of COVID-19 — close to the level before the numbers started rising in late March — in the week ending Sunday.

Colorado is still tied with Michigan for the most new cases, compared to population, but the percentage of tests coming back positive dropped below 5%, suggesting the state has a better handle on the true number of infections than it did in recent weeks.

The number of deaths doesn’t appear to be falling yet, but they lag both because of the time it takes for the virus to claim a life, and because of reporting delays.

It’s too early to tell if Gov. Jared Polis’s repeal of the mask mandate and lifting of restrictions on all but the largest events will have any impact on cases and hospitalizations. Usually it takes at least two weeks for a policy change to show up in the state’s COVID-19 data.

The public health agencies overseeing Denver, Jefferson, Boulder, Adams and Arapahoe counties have said they’ll only require masks when the state does, and Douglas County previously ended its mask mandate.

Dr. Jon Samet, dean of the Colorado School of Public Health, said he’s hopeful that enough people have been vaccinated that the state can avoid another increase in hospitalizations, which have generally risen when precautions lapse. More than 2.3 million people in Colorado are fully vaccinated, and about 467,000 others have started the process.

It’s possible the current sharp decline will slow down, but not necessarily reverse, Samet said.

“Our vaccination rates may be high enough that we can weather the change in behavior that seems pretty widespread,” he said. “My hope is that we’ve turned the corner.”

A few regions remain hotspots. Hospitalizations rose at least half of days in the last few weeks in Larimer, Weld, Mesa and Pueblo counties. The number of cases and positivity rate also remain high in the San Luis Valley and Dolores County.

Different regions and age groups have been hit to varying degrees throughout the pandemic, but differences in vaccination rates could accentuate those gaps, Samet said. For example, people over 65 are largely vaccinated and middle-aged people are catching up, but young adults are still largely vulnerable if the virus spreads more widely, he said.

“Across the next month, we’ll find out how successful we’ve been” in vaccinating younger people, he said.