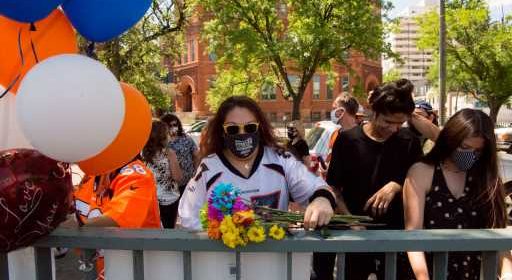 New cases of COVID-19 in Colorado rose for the second week in a row, but it’s not yet clear whether that reflects wider spread of the novel coronavirus or more extensive testing.

The Colorado Department of Public Health and Environment reported 1,716 new cases of the virus between June 22 and Sunday. The previous week, the state had reported 1,487 cases.

The last time Colorado’s new coronavirus cases rose two weeks in a row was in early April. New cases had declined consistently from the week ending April 26 to the one ending June 14.

Dr. Jonathan Samet, dean of the Colorado School of Public Health, said it’s still too early to be sure if Colorado is seeing a real increase, or just a byproduct of broader testing. The rate of positive tests is relatively stable, as is the number of hospitalizations, he said. Testing hit a new statewide high last week, according to health department records.

“The next two to four weeks will give us insight into what the epidemic’s doing in Colorado,” he said.

Colorado didn’t loosen restrictions on businesses all at once, so it’s less likely to see the kind of dramatic spike that states like Florida have, Samet said. Several states, including Arizona, Texas and Florida, have reversed some phases of their reopening, such as ordering bars to close again due to surges in new cases, particularly among young people.

Though Colorado isn’t experiencing the same dramatic rise in cases, the Centennial State has seen a similar increase in young people being infected. Over the last four weeks, COVID-19 infections are up about 25% across the state — but the rate of infection for younger people jumped even higher.

Samet urged members of the public to keep following recommendations like wearing masks, maintaining distance from others and washing their hands frequently, but said there’s no sign Colorado needs to reimpose drastic restrictions.

“I don’t think I would pull an alarm bell,” he said, adding “there should be no one with a false sense that we’re out of the woods.”

New cases are still well below their peak in late April, when Colorado reported 3,763 people had tested positive. Case counts sometimes are revised later, but typically change by only a few digits in either direction.

The state reported six coronavirus deaths last week. It appears new deaths have continued to decline, even as new cases rose, though it’s not unusual for the losses to show up in the data weeks later.

Statewide, 32,511 people have tested positive for the virus, and a total of 5,442 have been hospitalized since early March. There were 132 people with COVID-19 in Colorado’s hospitals as of Monday, down dramatically from April’s high of nearly 900 patients. The Colorado Hospital Association reports that just 284 of the 1,087 critical-care ventilators available in the state were in use as of Monday.

The virus was listed as the cause of 1,508 deaths in Colorado, and another 174 people died with it.