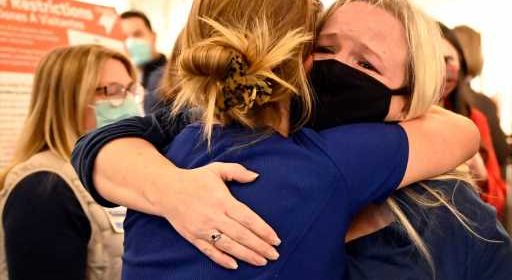 COVID-19 hospitalizations are rising quickly in Colorado, but the current wave differs from the previous five in several ways that make it difficult to know how worried residents should be.

Hospitalizations fell from Thanksgiving to Christmas, but the state has experienced a “sharp” increase in the past few days, Scott Bookman, the state’s COVID-19 incident commander, said at a news conference Thursday morning. As of Thursday afternoon, 1,103 people were hospitalized for confirmed COVID-19 across Colorado.

The state is watching South Africa, Europe and the northeastern states to see what omicron does in places that it hit earlier, and so far it doesn’t appear to be causing a “massive strain,” Bookman said.

A few hours after he spoke, Britain’s National Health System announced it planned to set up field hospitals to deal with rising COVID-19 hospitalizations, though it’s not yet clear if they will be needed or if the rapid increase in patients will level off, according to The New York Times.

On the positive side, there are signs the omicron variant, which is fueling an explosion in cases, may be less likely to send patients to the hospital than the previously dominant delta variant, but that isn’t certain, said Ginger Stringer, epidemiology response program manager at the Colorado Department of Public Health and Environment. It’s also possible the meteoric rise in cases will lead to an equally fast decline, Bookman said.

On the negative side, omicron is better at infecting people who have some immunity and could possibly sideline healthcare workers even if they’ve been vaccinated. And it’s so contagious that the sheer number of people infected could produce a massive need for hospital beds, even if the virus is somewhat milder and an individual’s risk of severe illness is lower than before, Beth Carlton, an associate professor of environmental and occupational health at the Colorado School of Public Health, said earlier this week.

Whatever omicron may do, it’s arriving at a precarious moment for Colorado hospitals. Even before hospitalizations began increasing in the days following Christmas, more than 90% of the state’s general hospital beds and beds in intensive-care units were full, and half of hospitals told state officials they could be short-staffed in the next week.

Recently, only about 500 to 600 of the state’s more than 7,000 general hospital beds were not in use on any given day, Bookman said. A shortage of staff limits hospitals’ ability to put additional beds into service, because health care workers are “burnt out” and leaving the field, he said.

“We do still see an incredible amount of stress in our health care system,” Bookman said.

Some health care workers have gotten sick from omicron, as have workers in other industries, he said. So far, that hasn’t resulted in large-scale disruptions for hospitals, but the state is working with the center that coordinates patient transfers to find beds elsewhere if one area reaches capacity, Bookman said.

The state has lost some tools to fight the virus since omicron took over. Monoclonal antibodies — lab-created versions of substances the body produces to disable the virus — can drastically reduce the odds a high-risk person will need to be hospitalized for COVID-19, but two of the three available forms don’t work against the new variant, Bookman said.

Until recently, Colorado received 4,000 to 5,000 combined doses of the three antibody options each week, but now it’s only getting enough of the one remaining product to treat 300 to 400 people each week, Bookman said. People who are at risk of severe disease because of their age or chronic conditions should still talk to their doctors about monoclonal antibodies, but fewer will get them, he said.

“That is an incredibly limited supply,” he said.

Getting vaccinated and getting a booster shot after enough time has passed are still the best ways to prevent severe illness, Stringer said. National media outlets report the U.S. Food and Drug Administration and the Centers for Disease Control and Prevention will meet next week to consider allowing people ages 12 to 15 to receive boosters and possibly shortening the waiting period for some people to get a third shot. Currently, people 16 and older must wait two months after the Johnson & Johnson shot or six months after their second dose of Pfizer or Moderna.

People who are vaccinated can feel comfortable going about their normal activities as long as they aren’t feeling sick, but the safest thing is to layer precautions, Bookman said. For example, people gathering for New Year’s Eve can reduce the risk anyone will catch the virus by having a smaller gathering, requiring everyone to show proof of vaccination and opening windows to improve ventilation, he said.

“The basics of infection prevention are still the same,” he said.