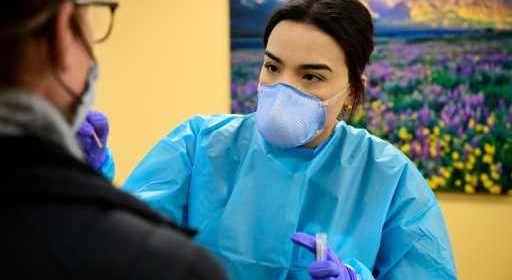 Colorado’s COVID-19 hospitalizations this week dropped to their lowest level since the earliest days of the pandemic, but the numbers still painted an unclear picture of what the virus might do in the near future.

The Colorado Department of Public Health and Environment reported 84 people were receiving care statewide for confirmed COVID-19 as of Tuesday. The daily count of people hospitalized for the virus has only been lower twice, on the first two days that Colorado collected that data in late March 2020.

Outbreaks also dropped to their lowest levels since mid-October, with 510 considered active statewide. An outbreak is five or more cases sharing a common link in most settings, or two or more connected cases in facilities that have a particularly vulnerable population, such as nursing homes.

COVID-19 hospitalizations, cases and the positivity rate are all low, suggesting the virus isn’t spreading widely after the most recent wave, said Talia Quandelacy, an assistant professor of epidemiology at the Colorado School of Public Health.

The number of virus particles detected in wastewater is also low, but has ticked up in a few systems, Quandelacy said.

“It’s hard to know what those kinds of fluctuations mean,” she said.

New COVID-19 cases appear to be falling slowly in Colorado, with 2,058 infections reported in the week ending Sunday. Relatively high numbers of late reports have made the trend less certain in recent weeks, however.

Colorado’s case counts have looked significantly worse on the Centers for Disease Control and Prevention’s website because the federal agency isn’t filtering out the older cases that have been recently have been added to state records, and is instead counting them as new infections. The state attributed the unusually high number of delayed reports to a backup in data processing from the most-recent surge, though some of the late cases long predated the omicron variant.

Normally, Colorado could look to other states for a sense of what to expect, but that data is becoming less useful as states scale back their testing and reporting, Quandelacy said.

The CDC estimated that the more-contagious BA.2 variant now accounts for more than half of cases nationwide, displacing omicron. So far, it hasn’t produced the increase in cases and hospitalizations seen in the United Kingdom, though new COVID-19 infections have stopped falling nationwide and are up over the past two weeks in 14 states.

The BA.2 variant does seem to be making inroads in Colorado, accounting for about 30% of cases in the week of March 13, according to the state’s data.

The CDC estimated about one in 11 Americans got COVID-19 during the omicron surge, making it relatively unlikely they’ll be infected with BA.2 in the next few weeks, though the odds vary across the country. Others are protected from severe illness by vaccination. Both types of immunity wane over time, though, meaning that an unknown number are gradually becoming susceptible again.

Regardless of whether BA.2 causes much disruption now, Colorado will face COVID-19 waves in the future, Quandelacy said. The best way to prepare is to catch up on your vaccinations if you’ve fallen behind, she said.

“It’s important that we keep reaching out to people and try to get them updated,” she said.