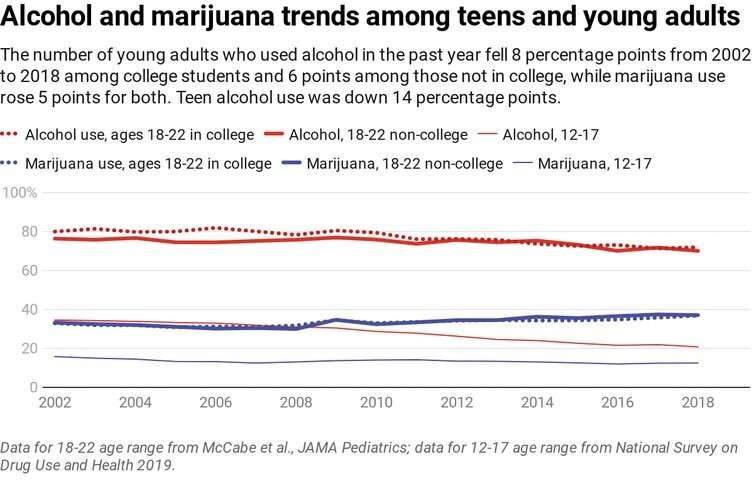 Young adults aren’t drinking as much as they used to. In fact, more than a quarter don’t drink alcohol at all, recent surveys show.

It’s good news for health. But there is also a downside in the data: While alcohol use is falling among 18-to-22-year-olds, marijuana use is inching upward. The number of young adults using both alcohol and marijuana is also rising, heightening concerns about a future surge in substance abuse problems, new research shows.

I am a professor of psychology at Texas State University who has been studying young adult and adolescent substance use for over 15 years. A key interest of mine is how substance use changes over adolescence and young adulthood. It is a period of profound change: A 13-year-old is very different from a 25-year-old in nearly every way.

With colleagues at the University of Michigan, the University of Central Florida and Iowa State University, I have been investigating trends in alcohol and marijuana use in young adults to better understand how use changes with age. The latest numbers offer both hope and concern.

There are reasons for the stereotype of hard-drinking, substance-using young adults, as photos and videos from bars and college parties will attest. But surveys and our analysis suggest that binge drinking isn’t as common as people may believe it is.

Using data from the annual National Survey on Drug Use and Health, we found that in 2018 nearly 30% of college-age adults, ages 18-22, had not had a single alcoholic drink during the previous year, compared with fewer than a quarter in 2002. Over 60% had not used marijuana at all.

Among 18-to-25-year-olds, the number who reported binge drinking in the previous year fell from 39% in 2015 to 34% in 2019. That may be influenced at least in part by beliefs that are forming in high school. Another survey shows that nearly three-quarters of high school seniors think their friends would disapprove of weekend binge drinking, up from just over half in the early 1980s.

Adolescents—typically 12 to 17 years of age—were more likely to avoid both alcohol and marijuana than they were two decades ago, part of a larger trend in declining substance use and risky behavior among adolescents seen in a variety of national surveys and data sources. In 2019, nearly 80% of adolescents had not used alcohol at all in the previous year, compared with 65% in 2002, and 87% had not used marijuana. 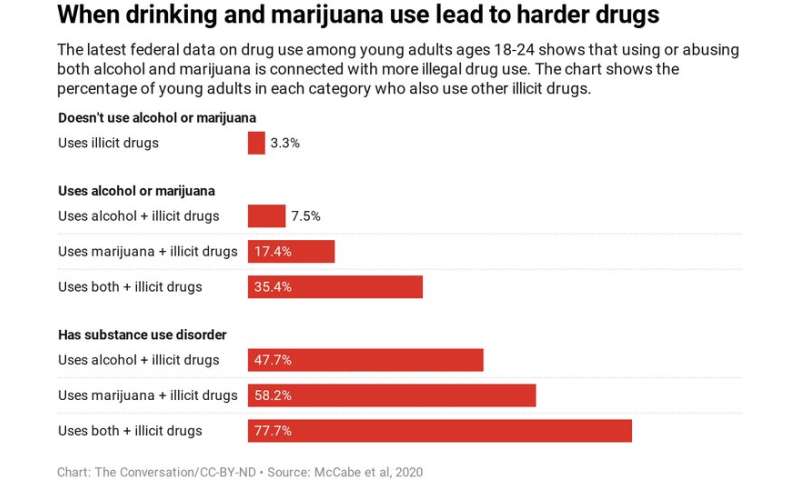 Using both marijuana and alcohol

The bad news is that the number of college-age young adults saying they used marijuana at least once in the previous year has increased, from 33% to 37%.

This increase in using both alcohol and marijuana is an important warning sign, because young adults in that group also had much higher rates of other illicit drug use, like cocaine, and prescription drug misuse, involving medications like opioids or benzodiazepines.

That may signal that a greater number will need substance use treatment in the coming years.

One theory for the shifting trends in alcohol and marijuana use is that adolescent substance use is now starting at later ages.

The data support this: The numbers of adolescents starting alcohol use has declined somewhat, while more college-age adults are first-time alcohol and marijuana users. Why that shift is occurring is less clear, but one theory is that adolescents have been engaging in more virtual contact than face-to-face contact in recent years and they rarely use substances when they’re alone.

Changing regulations likely also play a role. Marijuana is now legal for medical or recreational use in an increasing number of states.

Attitudes toward alcohol and marijuana have also changed over the years, particularly for marijuana.

The Monitoring the Future study, which has tracked substance use in adolescents and young adults since 1975, indicates both a sharp decline in disapproval of marijuana among middle and high school students and a decline in how harmful they perceive marijuana to be. In fact, more young people in that age group now see more harm from regular alcohol use than disapprove of marijuana.