Robotic surgery was never approved for mastectomy or any other cancer-related treatment, but that has hardly deterred doctors in the operating suite. The equipment is widely used to operate on patients with various malignancies, from breast cancer to prostate cancer.

Yet there have long been questions about how well doctors are trained on the machines, and whether the devices are better for patients than traditional methods.

Now the Food and Drug Administration has warned that there is no evidence cancer patients receiving robotic procedures live longer than those who have traditional procedures. And some research shows that patients with cervical cancer fare worse.

“We want doctors and patients to be aware of the lack of evidence of safety and effectiveness for these uses so they can make better informed decisions about their cancer treatment and care,” said Dr. Terri Cornelison, assistant director for the health of women at the F.D.A.’s Center for Devices and Radiological Health.

Robotic systems have been on the market for more than 15 years, and have been used for cancer surgery for much of that time. The machine’s tower, which is positioned over the patient, looks a bit like a multi-armed Star Wars droid. Three of its arms hold surgical devices, while a fourth holds a camera.

The F.D.A. noted the findings of two studies published last year in the New England Journal of Medicine.

One of them was a clinical trial that was stopped early after investigators found that women with cervical cancer who had so-called minimally invasive hysterectomies, including robotically assisted procedures, experienced four times as many cancer recurrences and six times as many deaths, compared with patients who had the more traditional procedure.

Yet many physicians continue to recommend robotic surgery to patients, despite the evidence of harm. “Several surgeons have said to me, ‘I can’t find a flaw in your study, but I just can’t stop doing it,’” Dr. Ramirez said.

“My feeling is, this is about patient care,” he said. “It’s not about how much time you devoted to your training or your ego. It’s an issue of cancer, and having a high likelihood of cancer coming back if you have surgery through this approach.”

It is not clear why cervical cancer outcomes were worse following minimally invasive surgeries. Dr. Ramirez suggested that the instruments used to manipulate the cervix and uterus may cause cancer cells to spread.

Another possibility is that the carbon dioxide pumped into the abdomen during robotic and other minimally invasive procedures — it provides working and viewing space for the surgeon — may increase the likelihood of cancer cells implanting, Dr. Ramirez said.

The F.D.A.’s warning was not limited to cervical cancer: Robotic surgical devices are not authorized for prevention or treatment of any cancer, nor are they approved for mastectomy (removal of the breast), the agency said.

The agency also urged health care providers “to complete the appropriate training” needed for performing robotic surgery, and urged patients to ask doctors about their training and experience, as well as about their patients’ outcomes. 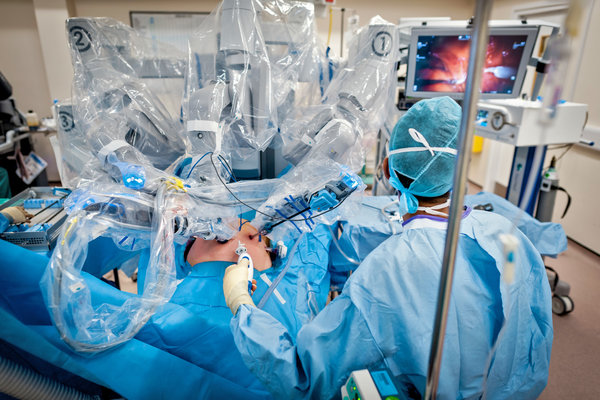 In 2000, the F.D.A. allowed the sale of one of the first robotic surgery systems, the da Vinci Surgical System, under a process called “premarket notification,” which is often used to bring medical devices on to the market without the rigorous safety and efficacy trials required for new drugs.

Under premarket notification, devices are “cleared” for use on the grounds that they are similar to devices already available. The da Vinci system is cleared for some urological and gynecological procedures, among others.

A similar robotic device, the Senhance Surgical System, was approved for gynecological and colorectal surgery, among other procedures.

But the efficacy of either system for cancer treatment has not been evaluated by the F.D.A. And none of the systems have been cleared for mastectomy, or removal of the breast, which has become a frequent use.

The F.D.A.’s approval was “based on evaluation of the device as a surgical tool and did not include evaluation of outcomes related to the treatment of cancer,” the agency said. The F.D.A. reviewed short-term data on outcomes, a spokeswoman said, not the long-term data important to cancer patients.

So why are these machines allowed in cancer surgery at all? According to a spokeswoman, the F.D.A. does not regulate the practice of medicine.

“If a medical provider determines it’s appropriate to use a product off-label, we don’t regulate that,” she said. “However, in this case, we were concerned about scientific journals and media reports referring to off-label uses.”

Many surgeons tout the benefits of robotic surgery, with its smaller incisions, saying the procedures bring shorter recovery times, less pain or blood loss and fewer scars and infections.

Those are important measures, said Dr. Ramirez. But “if you tell a patient you may stay in the hospital one or two days longer versus going home the same day, but there is a higher likelihood your cancer is going to come back, what are you going to choose as a patient? Of course, you’ll stay in the hospital.”

Proposals to conduct another clinical trial to test the cervical cancer outcomes would be unethical, Dr. Ramirez said, because results from the first study were clear.

Physicians who continue to use robotic and minimally invasive approaches for cancer treatment “in the face of the evidence may put themselves in legal jeopardy,” said Dr. Michael Carome, director of the health research group at Public Citizen, a consumer advocacy organization.

Patients may not have been the only ones caught off guard by the F.D.A.’s warning. Officials at Intuitive Surgical, maker of the da Vinci robotic system, believed their device was cleared for radical hysterectomies and removal of the prostate. The latter would only be done to treat cancer.

“We have reached out to the F.D.A. for clarification,” said Peper Long, a company spokeswoman.