An advisory committee debated the very few cases of a rare blood disorder and worried about the suspension’s effect on global needs for a one-shot, easy-to-ship vaccine. 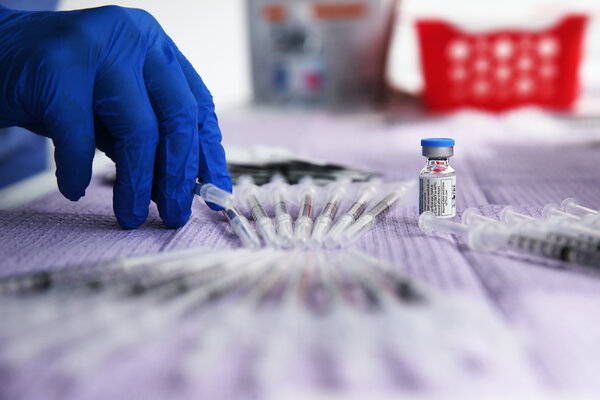 By Denise Grady and Carl Zimmer

The pause in the use of Johnson & Johnson’s Covid-19 vaccine may continue for a week to 10 days, after expert advisers to the Centers for Disease Control and Prevention determined on Wednesday that they needed more time to assess a possible link to a rare but serious blood-clotting disorder.

The decision not to reinstate the vaccine has painful consequences, nationally and globally. It may further erode public confidence in vaccination in general and slow the rollout of desperately needed shots to rural and underserved areas and homebound people. The vaccine is considered ideal for hard-to-reach people and places because it requires only one shot and is more easily stored and shipped than the vaccines made by Moderna and Pfizer-BioNTech, which must be kept at very low temperatures.

“Putting this vaccine on pause, for those of us that are frontline health care workers, has really been devastating,” Dr. Camille Kotton of Harvard Medical School told the panel. She said that losing the Johnson & Johnson vaccine even temporarily represented a big blow to efforts to stop the pandemic, especially in underserved communities.

The pause, first recommended on Tuesday by U.S. health officials, led Johnson & Johnson to delay its rollout of the vaccine in Europe, where several countries were poised to start administering it this week. The continent is reeling from the fallout over rare cases, sometimes fatal, of a similar blood disorder that has prompted several nations to limit or reject the widespread use of the AstraZeneca-Oxford vaccine and recommend alternatives.

South Africa, devastated by a worrisome variant of the virus that emerged there, also suspended use of the Johnson & Johnson vaccine. Australia announced it would not purchase any doses. And the European Union indicated that it would consider new deals only with companies that were not using the technology employed by the Johnson & Johnson or AstraZeneca vaccines.

Noting that many countries follow the United States’ lead when it comes to vaccines, Dr. Grace Lee of Stanford University, an expert on the panel, said that although the committee’s responsibility was to the United States, “I also feel the weight of the burden of a global responsibility that we also have and the impact that our decision-making can potentially worsen inequities.”

The advisory group’s emergency meeting on Wednesday was called to review the reason for the pause: six cases of rare and severe blood clots in the brain in women ages 18 to 48, one of whom died. All of the women had received the Johnson & Johnson vaccine before developing the clots, although it is unclear whether the vaccine was responsible. In addition, the panel learned of a seventh woman and a man who experienced the rare condition after receiving the vaccine during its clinical trials.