Breakthrough Covid Cases: Uncommon and Often Mild, but Not Always 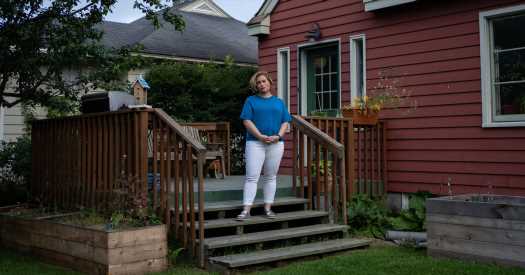 For Moira Smith and her mother, July promised a glimmer of normalcy after months of isolation. The two flew from Alaska to Houston and visited family, celebrating the first birthday of their cousin’s granddaughter. Ms. Smith’s mother bought a patterned pink onesie to give as a gift, and they all snapped photos of the baby’s face smeared with chocolate.

Ms. Smith, 46, knew that her cousin’s family was not vaccinated but tried not to dwell on that. She and her mother had both received their Pfizer shots months earlier. In the hotel room one evening, Ms. Smith’s mother made an offhand comment to her relatives: “You can take your masks off but you have to promise to get vaccinated,” she chided them.

The next morning Ms. Smith and her mother were headed home, on a layover in the Seattle airport, when they got the phone call: Their relative’s baby had come down with a fever and tested positive for Covid-19.

Two days later, Ms. Smith woke up feeling like she had been “hit by a Mack truck,” with body aches and a sore throat, and tested positive for the coronavirus. The next week, her mother, who is 76 and has lung cancer, texted her an emoji of a thermometer indicating she, too, had spiked a fever, and she later wound up in the emergency room with Covid.

Ms. Smith and her mother are part of a wave of Americans falling sick with Covid even though they are fully immunized, in what are known as breakthrough infections.

Public health experts continue to believe that breakthrough infections are relatively uncommon, and rarely result in severe illness or hospitalizations. The vaccines available in the United States offer powerful protection from serious Covid illness, hospitalization and death. A recent analysis of state-reported data from the Kaiser Family Foundation found that more than nine in 10 Covid-19 cases that resulted in hospitalization and death occurred among people who were not fully vaccinated.

“We always anticipated that there would be some breakthrough infections because the vaccines at their very best were 95 percent effective,” said Dr. William Schaffner, professor of infectious disease at Vanderbilt. “The vaccines were designed to prevent severe illness, and they’re spectacularly successful at that.”

But as the more transmissible Delta variant becomes dominant in the United States, rising numbers of breakthrough cases are being reported, although most are mild.

Because people infected with the Delta variant have far more of the virus in their nose and upper respiratory tract, the importance of mask-wearing has become paramount. After the Centers for Disease Control and Prevention shifted its guidance on masking, recommending that vaccinated people in hot-spot areas resume wearing masks in public indoor spaces, millions of Americans who are fully immunized struggled to adjust their expectations for autumn months that had seemed to offer some semblance of festivity. And a small subset of Americans has already seen their routines upended by breakthrough infections.

Spurred by concerns about breakthrough infections, federal health officials recently recommended that Americans who received the Pfizer or Moderna vaccines receive a third dose in the coming months. This week Johnson & Johnson reported that a booster shot of its vaccine raised levels of antibodies against the coronavirus.

For some, breakthrough infections have felt like mild allergies, coming with symptoms including a cough, sniffles and a scratchy throat. Others have had more severe cases, where they are bedridden with body aches, fevers and chills. And still others have had some of the telltale signs of Covid such as loss of taste and smell, “Covid rash” and brain fog.

“We were calling it floaty-head syndrome,” said Molly O’Brien-Foelsch, 47, a marketing executive in Pennsylvania who tested positive for Covid after a trip to the British Virgin Islands with her husband last month. “It felt like there was a huge marshmallow on my head.”

Scientists believe that breakthrough infections rarely result in severe illness, but there have been cases of prolonged hospitalizations. Elaina Cary-Fehr’s father Isaac, a 64-year-old Uber driver in Austin, was transferred to a long-term care facility after being hospitalized with Covid pneumonia in June and later receiving a tracheotomy tube. He was released from the facility this week.

“I believe in the vaccine, I kept holding on to hope that it would work and it did,” Ms. Cary-Fehr said. “But I hate that this had to happen to my family.”

Dr. Rebecca Hughes, 32, works as an emergency medicine resident in Boston, so she had spent the last year with a simmering sense of anxiety about Covid exposure. She can still recall the fear she felt the first time she treated a coding Covid patient and wondered for hours whether her mask might have slipped and put her at risk. But all year she was kept safe by her protective equipment.

Then, last month, her family took a vacation to visit her grandparents in Utah. It was a trip they had hoped to take last February but postponed as Covid case rates rose. Four days after they landed, Dr. Hughes felt her throat becoming scratchy. She was certain it was allergies but took a Covid test just in case; it came back positive. Shortly afterward her newborn, who was 9 weeks old, started sneezing and tested positive too, along with Dr. Hughes’s three other children, ages 8, 6 and 3.

“It felt ironic after I spent so long caring for Covid positive patients on every single shift since the pandemic started,” Dr. Hughes said. “My 8-year-old knows I’ve been seeing people die from this. She looked at me and said, ‘Am I going to be OK?’”

Although some breakthrough infections like Dr. Hughes’s are difficult to trace to a precise exposure event, other Americans have found their vacation plans intersecting with well-known outbreaks.

Understand Vaccine and Mask Mandates in the U.S.