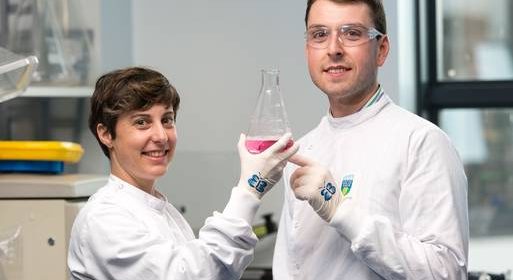 A team of Irish gene therapy researchers have made a breakthrough in the search for a cure for one of the worst strands of EB, the incredibly painful ‘butterfly’ skin disease.

Experts at UCD have produced a revolutionary solution that uses gene therapy to repair bad cells, transforming them into fully functioning ones.

It is hoped that with time and further research the technique could be developed to help find cures for other genetic conditions such as cystic fibrosis, muscular dystrophy or Huntington’s disease.

The first breakthrough at laboratory level is aimed at treating EB – epidermolysis bullosa.

The incredibly painful genetic condition, which affects about 300 people in Ireland, is caused by a fault in the gene that makes a vital protein responsible for binding our layers of skin together.

This results in painful blisters – both internal and external – from the slightest knock or bump.

The new concept has been pioneered by Prof Wenxin Wang, who has been carrying out research into EB for the past 10 years with assistance from Debra Ireland.

Dr Jonathan O’Keeffe Ahern, one of the leading gene therapy researchers in Prof Wang’s team together with Dr Irene Lara-Sáez, said the key development was a new way of delivering a “genetic scissors” to cut out the bad part of the gene.

It is actually an enzyme with coding attached so that it knows where to go.

“We call this the FedEx of gene editing – we deliver a biological solution using a simple carrier system,” said Dr O’Keefe Ahern.

“Rather like using a postcode, we can send in a genetic scissors to cut out the non-functioning part of a gene and then the repaired cells know to fill that space and permanently repair the gene.”

In the past, viruses have been used to deliver gene therapy, but the UCD team has devised a way to deliver the genetic scissors via a cream, ointment or gel.

This has the potential to provide a permanent cure for patients with recessive dystrophic EB, one of the most severe sub-types of the disease – for which no treatment currently exists.

The researchers say it is safer than viral delivery and also avoids the need for invasive procedures. “The best part of this therapy is that it would not involve painful skin grafting procedures or risks associated with viral treatments in delivering functioning genes to the skin,” they say.

“We would not need to even take the patient cells for skin grafting. The gel would be applied, absorbed and go to work.”

Laboratory tests have so far proved promising. While stressing that it remains years in the future, Dr O’Keefe Ahern said the researchers’ dream is to expand the treatment. “We have seen some promising results in the lab. With further research, we could expand this to other EB types and even other genetic conditions,” he said.

“At the moment the main goal is just the proof of concept, but the system can switch from one [gene] to another. All we would have to change is the location we want to cut out.

“We are in the process of forming our own spin-out company to continue to develop this technology and take it to the next step, a clinical trial.

“Clinical trials take a large amount of time but this brings us one step closer along the ladder.

“This is very exciting time for people involved in EB research.

“We depend totally on public funding and we are now at a stage where every euro can make a vital difference to the future lives of people living with the condition.”