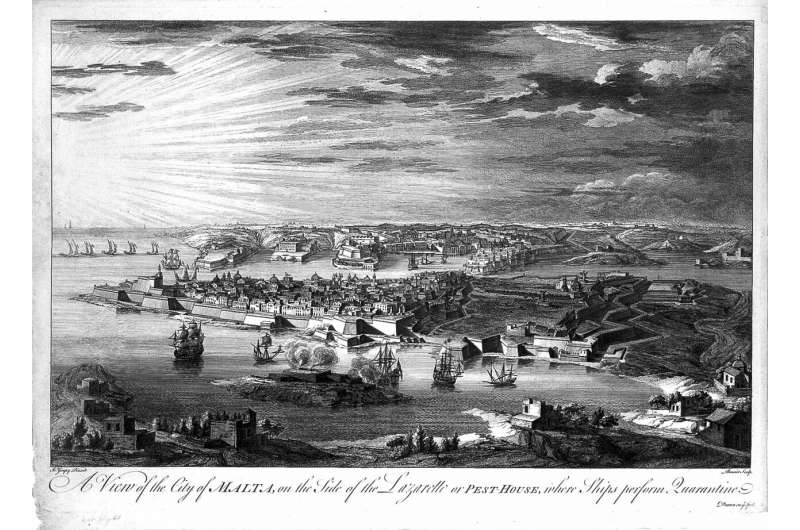 Fearing disease from a foreign country, public health officials clamped down on travel and trade, mandating lengthy quarantines. These measures dampened tourism, drove up the price of goods and slowed down their distribution.

The epidemic in question wasn’t coronavirus, but the bubonic plague. Binghamton University Associate Professor of History and Public Health Alex Chase-Levenson explores public health efforts to combat the spread of plague in his recent book, “The Yellow Flag: Quarantine and the British Mediterranean World, 1780-1860.” Published during the height of the coronavirus pandemic in 2020, his book recently won the Stansky Prize from the North American Conference on British Studies.

The Yellow Flag recounts British participation in Europe’s “universal quarantine” of people and cargo arriving from the Eastern Mediterranean and North Africa, then largely part of the Ottoman Empire, which continued to suffer periodic bouts of plague for nearly 150 years after the flea-borne illness was eradicated in Europe. These quarantine measures also shaped responses to domestic epidemics, such as cholera.

“This is the most massive system of quarantine that existed in terms of global reach and ambition and systematic power,” Chase-Levenson said. “In the early 19th century, every single person or ship or piece of mail or trade good that was moving across the Mediterranean from the Middle East or North Africa to Western Europe was quarantined, regardless of whether there was any disease going on in the Middle East or North Africa.”

Plague epidemics weren’t frequent in many Ottoman cities. In fact, the universal reach of the quarantine system meant that often more than 90% of ships detained at any given time had come from ports with no recorded disease. No one was exempt; up until about 1850, everyone—from sailors to rulers—was subject to quarantine, even during times of war.

In the days before the World Health Organization, the rules were imposed by local boards of health in each port city, who communicated with one another by mail. They faced pressure to comply with norms: If one port loosened its own rules, ships from the surrounding country would be under quarantine when they traveled to another city. This pressure enabled Western and Central European countries to develop a shared set of comprehensive standards that resembled a transnational system of border control, but which was neither monitored nor run by a central authority.

In this system, all ships had to have a bill of health granted by a European consulate somewhere in the Middle East. This bill of health determined that the ship was “clean, suspected or foul,” based on the prevalence of plague; this status determined the amount of time under quarantine, often from about 18 to 21 days on a “clean” ship or 35 to 40 days for one determined to be foul.

The restrictions applied to passengers as well, although trade goods—considered riskier—were often quarantined longer than people.

“There was no germ theory of disease at this time. There were vague ideas of contagion, and those vague ideas seemed to suggest generally that porous materials and fabrics were particularly risky,” Chase-Levenson explained.

At the time, major trade goods en route to Europe included cotton and silk, making these restrictions both onerous and expensive. Shipping anything easily perishable was out of the question, and long quarantine periods also increased the possibility of merchandise theft and smuggling.

While quarantine was ostensibly about the bubonic plaque, it also represented a barrier between two cultures and civilizations. In fact, the geography of historical quarantine resembles today’s migration crisis in the Mediterranean, and the attempt to prevent migrants’ and refugees’ entry into Western Europe.

The 19h century saw the spread of Orientalist stereotypes, which attributed disease to ostensible “luxury and excess” in Asian culture and wrong-headed ideas about supposed Islamic fatalism. Illness filtered into these evaluations and helped shape such negative perceptions thanks to the quarantine system, Chase-Levenson explained.

Contrary to Western opinion at the time, Islamic societies did have their own measures to stem epidemic diseases. Quarantine itself was often one of these; in the modern period, Egypt set up a quarantine system in 1831 and the practice spread to all major ports in the Ottoman Empire in 1839, although Ottoman advocates of quarantine were motivated in part by concern over commercial penetration by European powers. Coinciding with these measures, after the Egyptian epidemic of 1835, plague began a rapid decline in the Middle East.

That led in part to the elimination of the quarantine system, but many other factors were in play at the time, including pressure from the rise of European imperial intervention on the south and east coasts of the Mediterranean. The clearest example of this is Algeria; after the French invaded in 1830, ships from the North African country were subject to quarantine for the next 11 years, and the pressure to end this rule helped destroy the reputation of Marseille’s board of health, previously the most powerful quarantine authority in the Mediterranean.

Confidence in the value of quarantine also began to fall after it failed to stop the 1832 spread of cholera in Western Europe. Medical theories also shifted to embrace “anticontagionism,” which attributed disease to “miasma,” a type of gassy exhalation connected with landscapes such as marshes or swamps, or sudden changes in temperature.

What can we learn from universal quarantine? The local boards of health that enforced it help lay the groundwork for international disease control later in the 19th century and into the present: the International Sanitary conferences from 1851 to 1938, and the World Health Organization, established in 1948. The first sanitary conference, as it happens, was entirely devoted to the dismantling of universal quarantine, Chase-Levenson said.

And while “quarantine” may seem like a familiar concept due to the recent pandemic, those earlier boards of health would likely have handled matters far differently, according to Chase-Levenson. Every traveler from an affected part of the world, or even from countries with less stringent rules, would have spent considerable time in a quarantine station, known as a lazaretto, to ensure they didn’t carry the illness.

Would that level of quarantine have stopped the spread of the coronavirus? It’s hard to say, according to Chase-Levenson. After all, the volume of trade and travel is much greater than 200 years ago, when travel was limited to ships, trains and horses.