Black Therapists Fight to Be Seen on TikTok. When They Are, They Find Solidarity. 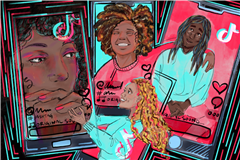 From a well-lighted room, the plants blurred in the background, their face framed by closed captioning, Shahem Mclaurin speaks directly into the camera. The lesson: “Ten ways to start healing.”

But this is not a classroom, nor is it a therapist’s office. This is TikTok.

“We all have our own things to carry, and those burdens shouldn’t be carried with us for the rest of our lives,” says Mclaurin, a licensed social worker.

Through videos — some on topics like grief, “race/race-ism,” trauma, and healing, others raw reactions or trending sounds, like this call to action to amplify people of color on TikTok — Mclaurin advocates for better representation in the mental health field. Mclaurin speaks to viewers who haven’t found caregivers they connect with because of stigmas surrounding therapy and acknowledges that few practitioners look like them.

“I am a Black, queer therapist, and I want to showcase myself being fully that,” Mclaurin said. “I always say, ‘My durag is part of my uniform.’”

Mental health professionals have soared in popularity on TikTok, addressing a wide swath of mental health conditions, reacting to the racial trauma from charged events like the trial of Derek Chauvin for George Floyd’s murder and the Jan. 6 insurrection, and bringing humor to sensitive issues like depression that for some communities remain hushed. On TikTok, Black therapists talk openly about working in a predominantly white field, while at the same time making mental health care more accessible for people who might be shut out of the health care system.

The Chinese-owned video app, with its U.S. headquarters in Culver City, California, provides a massive platform and even the potential for fame, with more than 1 billion monthly users. The hashtag #mentalhealth has racked up more than 28 billion views, alongside others like #blacktherapist and #blackmentalhealth that attract audiences of millions. 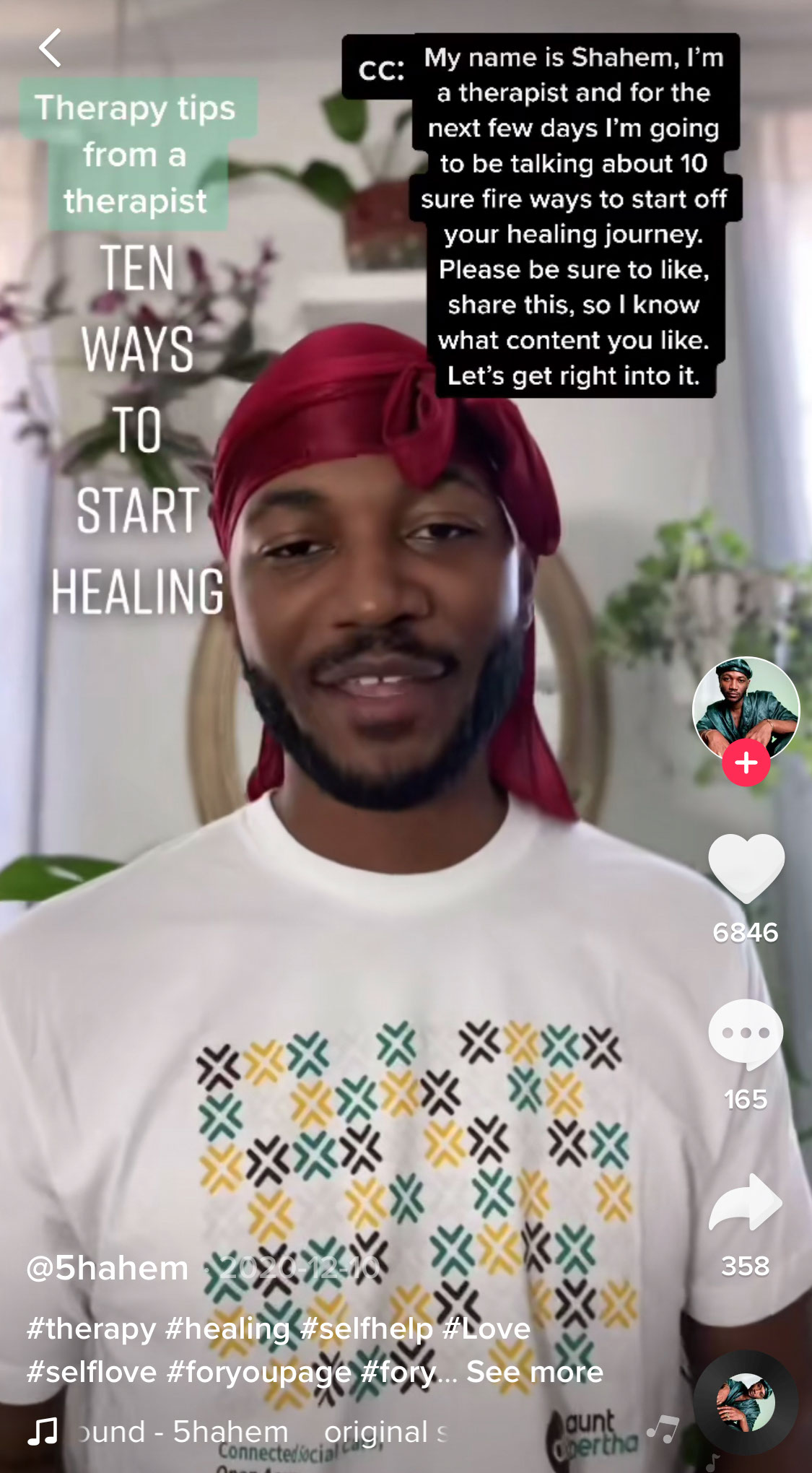 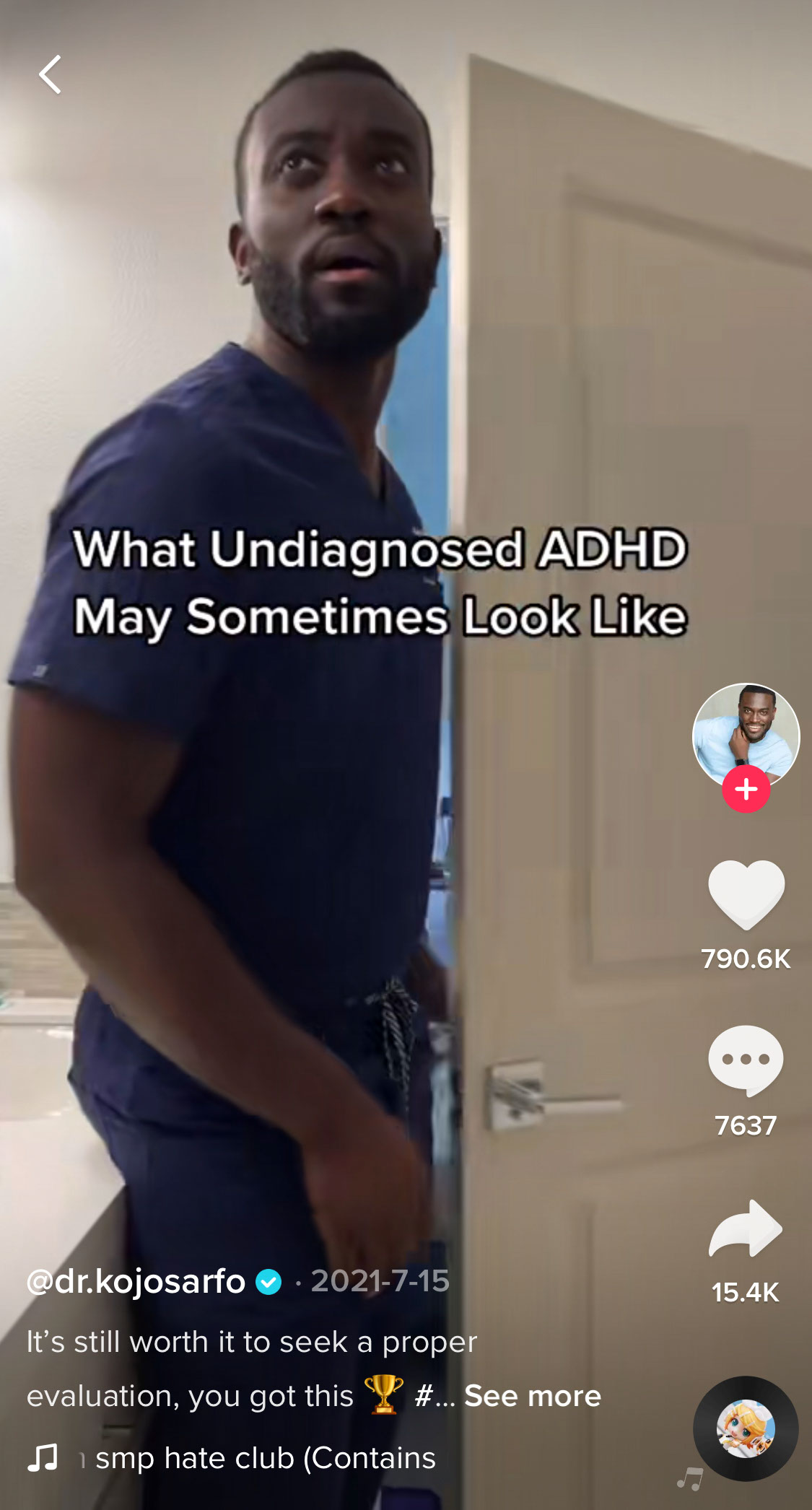 Video production has ballooned into a main job for Kojo Sarfo, a psychiatric mental health nurse practitioner living in Los Angeles, who has pulled in 2 million followers. Sarfo dances and acts out short skits about attention deficit hyperactivity disorder, eating disorders, and other mental health conditions.

“I try to lighten topics that are very difficult for people to talk about,” he said. “And to let people know that it’s not as scary as you would think to go get help.”

Patrice Berry, a psychologist from Virginia, uses TikTok mostly to respond to people’s questions about things like tips for new therapists and setting boundaries with teens. Berry isn’t there to find clients. She has a waitlist at her private practice. She said TikTok is a way to give back.

Her comments sections are an outpouring of largely appreciative notes and follow-up questions, with some videos getting more than a thousand replies.

In one TikTok, Berry jokes about abruptly leaving a church when “they say you don’t need therapy or medication.” One user commented that was how she was raised in her Black Baptist church and that “we have so much unlearning and relearning to do.” Another wrote, “As a therapist I love this. Preach!”

A tightknit TikTok community has formed, and Berry spearheaded a Facebook group dedicated to Black, Indigenous, and other people of color focused on mental health.

“I wanted to create a safe space for us to be able to have real conversations about our experiences on the app and to share tips and resources,” she said. 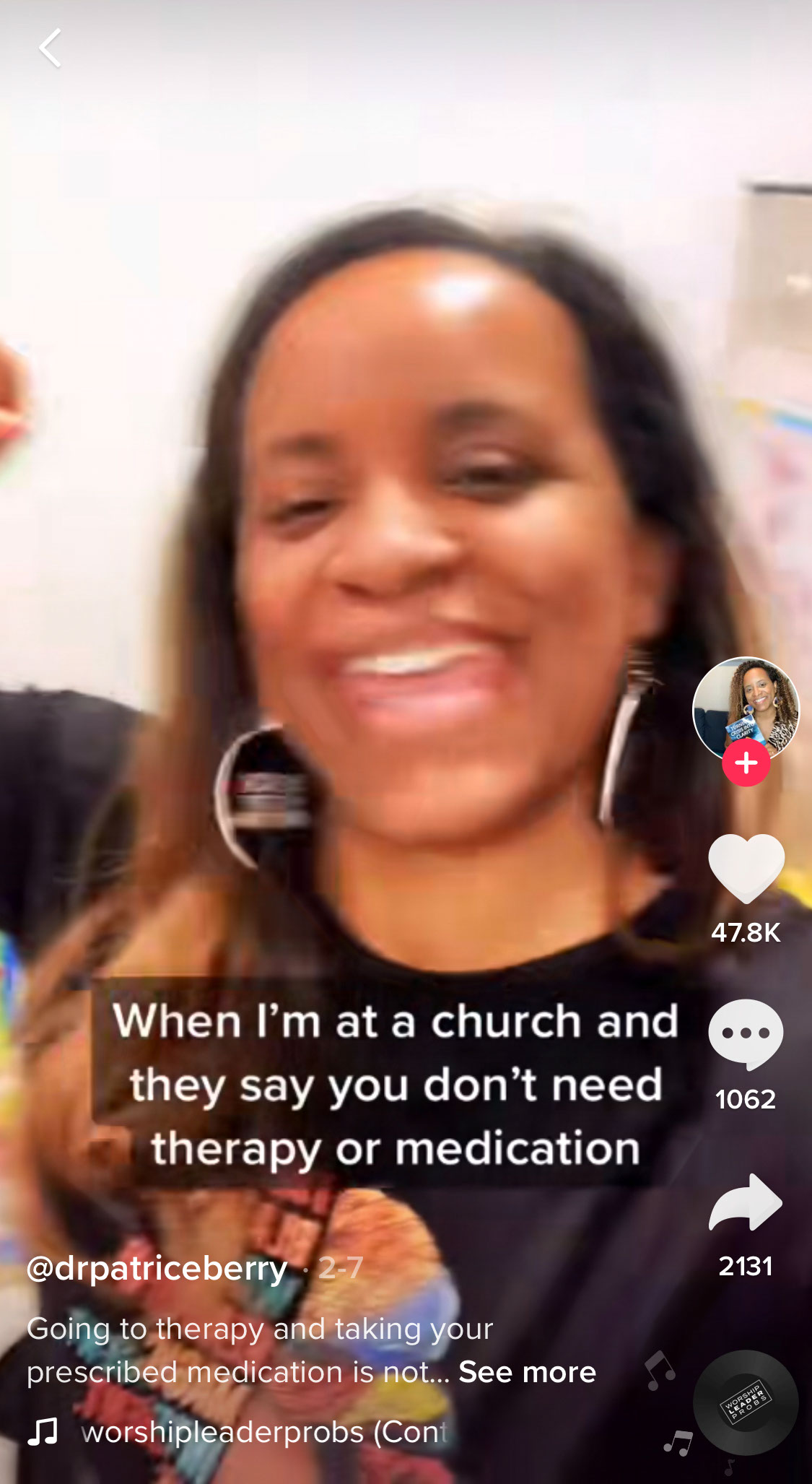 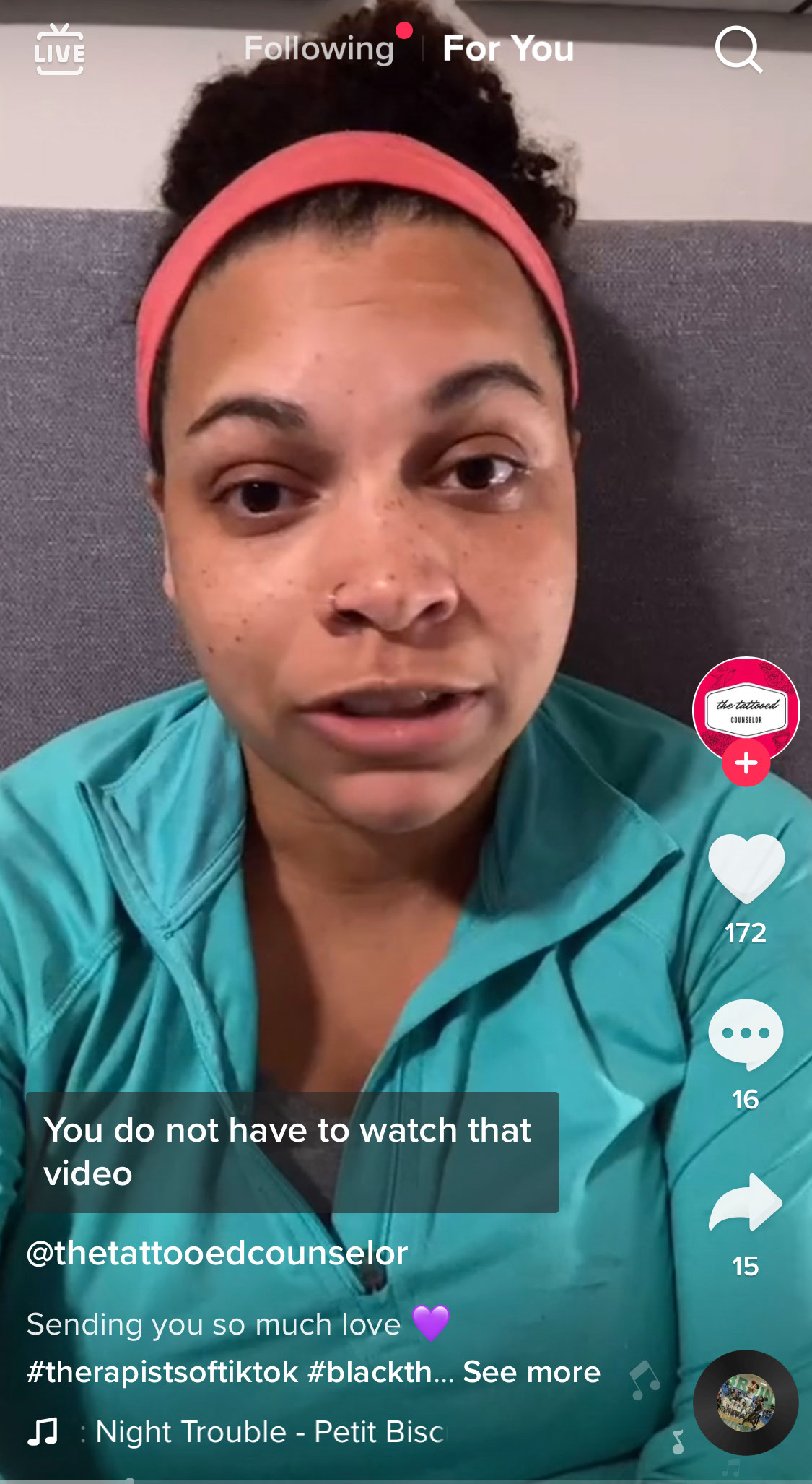 Like other TikTokers, she is quick to note that watching videos is not a substitute for seeking professional help and that important concepts can get lost in the scrolling. Plus, even as TikTok works to identify and remove inaccurate information, creators without mental health degrees are going viral discussing similar issues without the expertise or training to back up their advice.

When dealing with trolls, Cubbage said, the emotional support from creators she’s met on TikTok is indispensable. “That’s been one of the really neat things about the app is finding this community of Black therapists that have become like friends to me,” she said.

Where to Look for Therapy

It can be incredibly difficult to find an affordable therapist that is accepting patients, let alone a therapist of color. Psychologist Alfiee Breland-Noble shared some resources for finding care:

– Psychology Today has a searchable database that filters by location, insurance, ethnicity, type of therapy, price, and more.
– InnoPsych offers a directory of therapists of color.
– Therapy for Black Girls has a database, too.
– Melanin & Mental Health is another option with a directory of providers.
– AAKOMA Project, the nonprofit that Breland-Noble founded, offers five free virtual therapy sessions.
– Black Men Heal also provides free therapy sessions.
– The Loveland Foundation has a free therapy fund for Black women and girls.
– The Boris Lawrence Henson Foundation has a free therapy fund and a directory of mental health providers serving the African American community.

Unlike Facebook, which relies largely on a user’s friends and followers to populate the feed, TikTok’s algorithm, or “recommendation system,” has a heavy hand in what people see. When a user engages with certain hashtags, the algorithm pushes similar content, said Kinnon MacKinnon, an assistant professor at York University in Toronto who has researched the app. At the same time, TikTok does heavily moderate content that does not abide by its community guidelines, suppressing pro-eating disorder hashtags like #skinnycheck, for instance.

Black creators have repeatedly said they’ve been suppressed on the app. At the height of the protests following George Floyd’s death, the company apologized after posts uploaded using #BlackLivesMatter and #GeorgeFloyd received 0 views. (TikTok cited a “technical glitch.”) Last June, many of TikTok’s Black creators went on strike to protest a lack of credit for their work as white creators copied their dances and skyrocketed to fame.

Black therapists suspect racial bias, too. Berry said that, at times, TikTok users have questioned her credentials or tagged a white creator to confirm information.

Around the same time as the strike, TikTok wrote that it was training its enforcement teams “to better understand more nuanced content like cultural appropriation and slurs.” The company hosts a variety of initiatives promoting Black creators, including an incubator program. Shavone Charles, TikTok’s head of diversity and inclusion communications, declined to speak on the record but pointed KHN to statements released by TikTok. 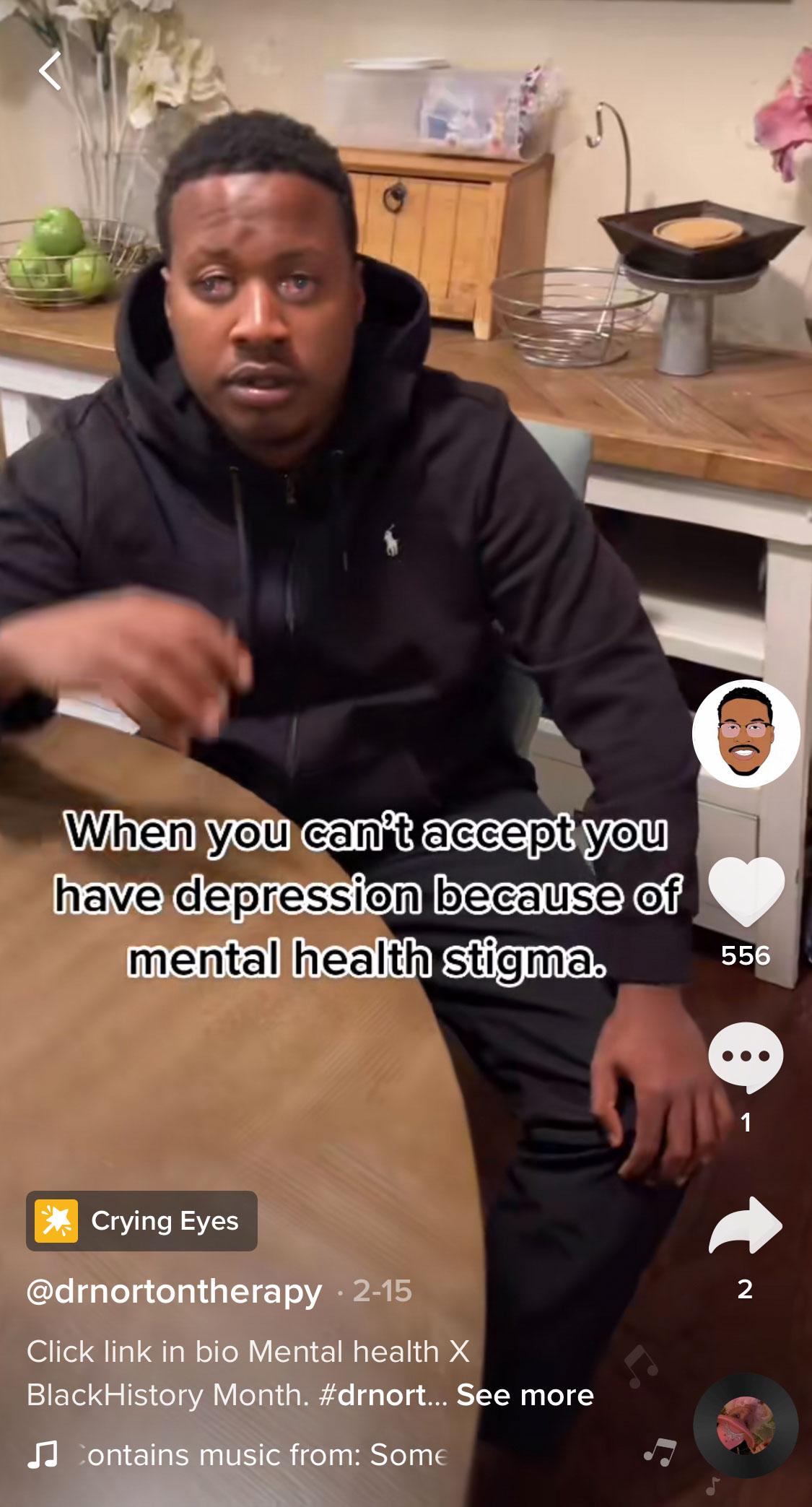 Marquis Norton, a TikToker, licensed professional counselor, and assistant professor at Hampton University, tries to guide people toward more in-depth resources outside the app, but he worries people may sometimes try to self-diagnose from what they find on the internet and get it wrong.

Viewers regularly ask Norton to take them on as patients — a common request heard by mental health professionals on TikTok — though complicating factors like state licensing and insurance restrictions make finding a therapist on the app tricky. So he made a video about where to search.

Berry has also posted a handful of videos with advice about finding the right therapist, including one certified to treat trauma and for a child.

“I think it’s wonderful that it’s opening a door for people,” said Alfiee Breland-Noble, a psychologist and founder of the AAKOMA (African American Knowledge Optimized for Mindfully Healthy Adolescents) Project, a BIPOC mental health organization. At the same time, she added, it can be frustratingly like a “glass door” for some, where the mental health services remain out of reach.

“Black people still underutilize mental health care in proportion to what the need is,” she said.

A behavioral health equity report from the federal Substance Abuse and Mental Health Services Administration found that in 2019, 36% of Black adolescents ages 12 to 17 who had major depressive episodes received treatment, compared with more than half of their white peers.

Shortages in mental health care providers and the costs associated with therapy are factors, but “more of it is, they’re just not going to go,” Breland-Noble said. “Conversations have not changed that much for Black communities of the diaspora.”

Especially for older generations, Norton said, people have adapted a disease model of mental health, in which seeking help meant that there is “something wrong with you.” But the mindset has shifted, propelled by millennials and Gen Z, toward a wellness model without the same stigma attached.

Norton hopes his videos will keep inching these conversations forward.