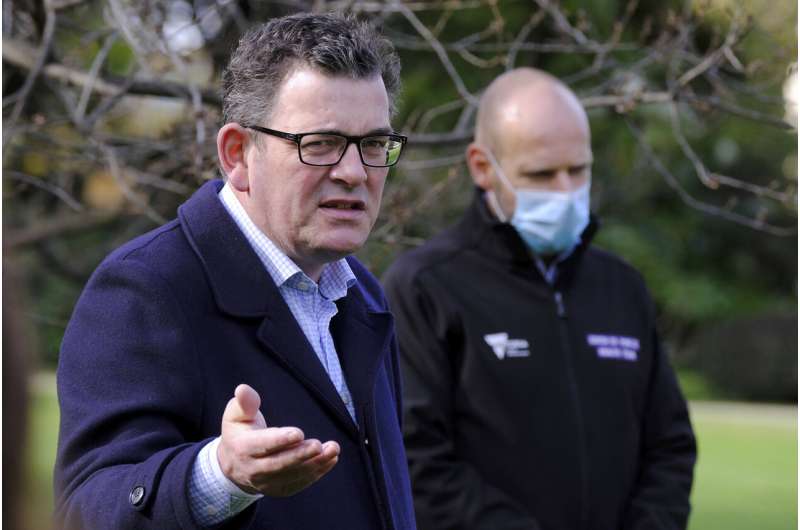 Australia’s second-largest city Melbourne went into a 6th lockdown on Thursday, with a state government leader blaming the nation’s slow COVID-19 vaccination rollout for the decision.

Melbourne joins Sydney and Brisbane, Australia’s most populous and third-most populous cities respectively, in locking down due to the spread of the highly contagious delta variant.

Melbourne and surrounding Victoria state will lock down for seven weeks after eight new infections were detected in the city, Victoria Premier Daniel Andrews said.

Andrews gave less than four hours notice that the state would lock down from 8 p.m. local time. He said his government had no other choice because only 20% of Australian adults had been fully vaccinated by Wednesday.

“To be really frank, we don’t have enough people that have been vaccinated and, therefore, this is the only option available to us,” Andrews said. “The time will come when we have many more options. But that isn’t now.”

Andrews has accused neighboring New South Wales state of taking too long to lock down Sydney after a limousine driver who became infected while transporting a U.S. aircrew from Sydney Airport tested positive to the delta variant on June 16.

New South Wales on Thursday reported its worse day since the Sydney lockdown began on June 26 with a record 262 new local infections and five deaths.

New South Wales Premier Gladys Berejiklian said four of the dead had not been vaccinated. One had had a single dose of the two-shot AstraZeneca vaccine in late May.

Australian authorities have urged people in Sydney not to wait the optimal 12 weeks before taking their second AstraZeneca dose.

“No one who has died has had both doses of vaccine. I cannot stress enough how it’s so important for everybody of all ages to come forward and get the vaccine,” Berejiklian said.

AstraZeneca and Pfizer are the only vaccines available in Australia.

The government reported 262 locally acquired infections in the latest 24-hour period. Another six cases were diagnosed in hotel quarantine and are not considered threats to the community.

When Victoria ended its fifth lockdown last week, Andrews said he believed the state was the only jurisdiction in the world that had beaten a delta outbreak twice.

Melbourne was the Australian epicenter of the pandemic last year, when new infections peaked at 725 in a day in August. Of Australia’s 925 COVID-19 deaths since the pandemic began, 820 have occurred in Victoria.

Authorities were gaining confidence on Thursday that a lockdown of Brisbane and surrounding cities in Queensland state will end an eight-day lockdown as planned on Sunday.

All 16 new locally acquired cases reported on Thursday have been directly linked to known exposure sites.