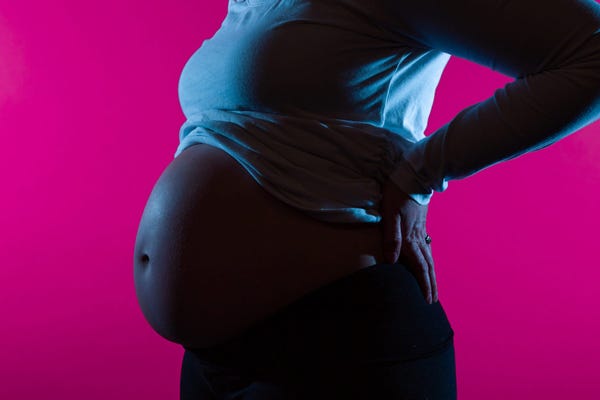 When Brianna Hill's water broke while taking the bar exam, the recent law school graduate in Chicago soldiered on, finishing the section in accordance with the test's remote rules, which say lawyers must remain seated to ensure they aren't cheating.

After cleaning up and checking with her family and midwife, she finished the second portion too. Only after that did she and her husband head to the hospital, where their son was born less than five hours later.

The next day, Hill completed the rest of the exam — four 90-minute segments in total — from a private hospital room, breastfeeding her newborn during breaks.

"The whole time [during labor] my husband and I were talking about how I wanted to finish the test and my midwife and nurses were on board," Hill said, according to Above the Law. "There just wasn't another option in my mind."

The story took off, and was picked up by multiple media outlets, including CNN, the New York Times, the Hill, and many other local news outlets around the country.

It's not the only recent viral story of a woman, well, laboring in labor. When Dr. S. Keisin Wang posted a photo of his wife, surgical resident Dr. Natalie Drucker, working from a hospital bed, nearly 10,000 people "liked" it and about 900 retweeted it.

But four women told Insider that working during labor, at least the initial stages, is common and not necessarily a big deal. While some raised concerns about that reality — saying it's a reflection of a culture without required paid maternity leave, for instance — others said it was a welcome distraction or even empowering.

Cassie Shortsleeve, 31, Boston: 'I worked until I pushed' 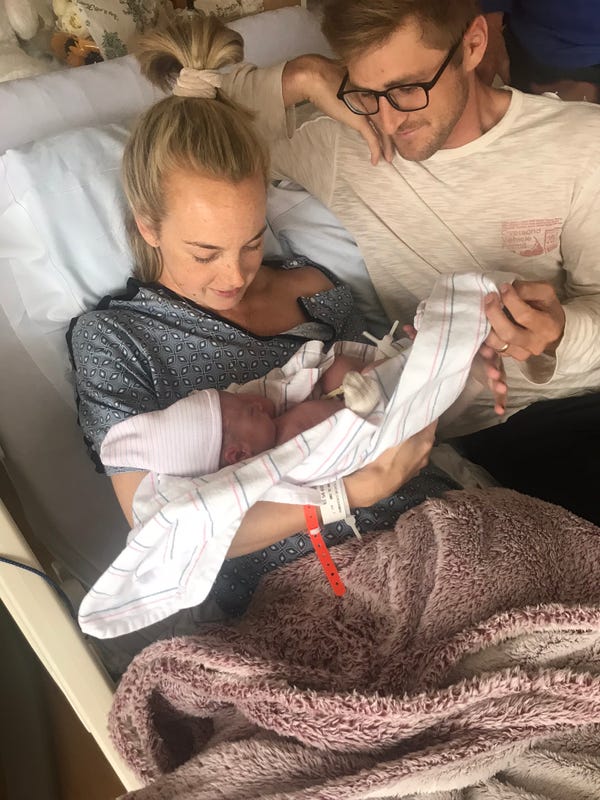 As a freelance writer with no paid maternity leave, Cassie Shortsleeve wanted to keep taking assignments as long as she physically could. "I worked until I pushed, pretty much," Shortsleeve told Insider.

It helped that she worked with "many amazing female editors" who knew if she went into labor, she might have to drop an assignment. Plus, she's the type who wouldn't have enjoyed just sitting around waiting for the baby to come.

"I was, to some extent, happy to keep working," said Shortsleeve, who's since founded Dear Sunday, an online platform that helps women adjust to pregnancy, postpartum, and new motherhood.

Still, she said, "I think there's tremendous pressure on women — particularly pregnant women and new moms — to perform, and this holds especially true for keeping up with their professional lives up through the very last moments of pregnancy."

Women's fears about job losses, workplace discrimination for pregnancy and motherhood, are well-founded, she added, citing statistics showing, for example, that 69% of working Americans say working moms are more likely to be passed up for a new job than other employees.

"If women in this country were allowed the comfort of knowing that they had a paid, government-backed maternity leave after they had a baby or that they had flexibility in the workplace throughout a pregnancy," she said, "I can imagine there would be a lot less stress in pregnancy and new motherhood."

Hannah Riopelle, 32, Linden, Michigan: 'It felt like a normal day' 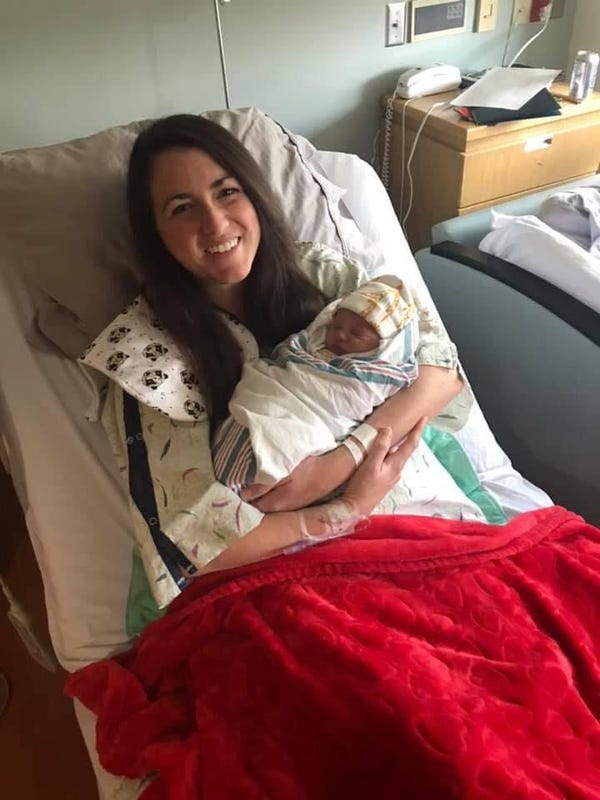 Hannah Riopelle was induced a few weeks earlier than expected, meaning neither she nor colleagues were prepared for her departure.

Fortunately, she had a relatively easy labor, the nurses told her, allowing her to field work calls from her hospital bed early on before the hard work began.

The first 20 hours "felt like a relatively normal day, though there is an element of anxiety when you're facing the unknown, and at the height of a pandemic," said Riopelle, a partner and operations director at Evidence-Based Literacy Instruction, an organization that supports teachers, parents, and educators in teaching kids to read.

"The few colleagues I spoke to felt bad they were calling," she added, "but also wanted to get their questions out of the way before our baby arrived."

Because of her role in the organizaiton, Riopelle said she never really expected to completely off work, so the experiene didn't phase her. "Women are tough cookies and excellent multi-taskers," she said.

Haley Neidich, 35, St. Petersburg, Florida: 'It was exactly what I needed to go through' 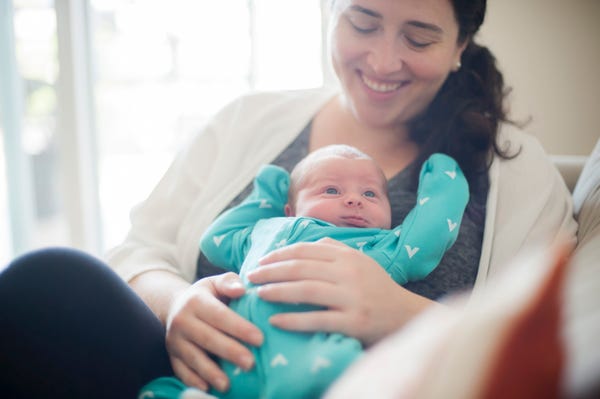 When Haley Neidich's water broke the day before her maternity leave was set to begin, the psychotherapist who served as clinical director for a telehealth company at the time calmly kept working for about two hours to wrap up loose ends.

"I was experiencing intense fear about labor and birth, and my brain needed some time to come to terms with reality that it was my birthing day," Neidich said, calling her reaction to work a denial coping mechanism.

After those few hours, though, "I allowed myself to be supported and feel my fear."

"In hindsight, I think it is a fun part of our birth story and it felt like it was exactly what I needed to go through at the time," she said. "I chose to work during labor, but I was not expected to and I knew I could stop at any time."

Neidich, who specializes in maternal mental health, knows not all American moms have that autonomy over their work during and after labor.

"We live in a culture with no paid leave for birthing people and a real lack of understanding of how we can support women who are preparing for their birthing day and postpartum," she said. "My hope would be that women can feel empowered to focus only on their needs and the needs of their baby during labor, birth, and postpartum."

Hilary Young, 37, Philadelphia: 'It really helped me focus on something' 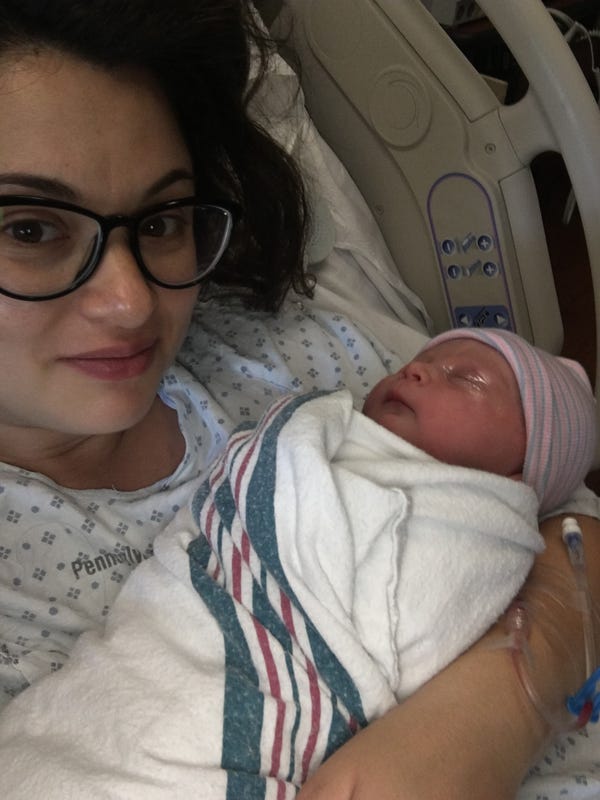 As branding strategist and content consultant who runs her own business, Hilary Young kept sending and responding to emails after being induced when 39 weeks pregnant with her second child. "There was really no one else who could take over the reins from me," she said.

"At one point, I remember my husband napping on the couch while I was working on my phone, and working through labor pains," she added.

The experience was ultimately positive for Young. "It really helped me focus on something other than waiting for the baby to arrive, and made me feel good to be productive while sitting in a hospital bed."

Plus, she loves her work, having launched the business while seven months pregnant with her first child. "I am really proud of myself for what I have been able to achieve with my business and am living proof that you can have it all as a working mom — sleep and sanity not included," she said.