CONCORD, N.C. — It had been months since Tremellia Hobbs had an excuse to bring out the pompoms. Before the pandemic, they were a crowd favorite at movie nights and bingo tournaments that Hobbs organized as activities director at the Brian Center Health & Retirement/Cabarrus nursing home.

On Jan. 14, she finally had a reason. After nearly a year of living with pandemic restrictions and a summer outbreak that killed 10 residents and infected 30 staff members, the nursing home was hosting its first covid-19 vaccine clinic.

So Hobbs lifted the red and silver tassels into the air and cheered as her co-workers lined up to get shots from two visiting CVS pharmacists. “Stewart, Stewart, he’s our man! If he can’t do it, no one can! Goooo, Stewart!”

But even as Hobbs rooted for her colleagues, decorated the dining hall with green and blue balloons, and assembled goodie bags with Life Savers gummies for those who received their shots, she knew she wouldn’t be getting the vaccine herself.

“Being able to diagnose, come up with a vaccine and administer it all within the same year just seems a little puzzling,” she said. “I would like to see, give it a little more time.”

Hobbs’ hesitancy has been echoed by nursing home staff members across the state and country. But her reasoning — as well as that of her colleagues who also opted against the vaccine that day — goes far beyond a simple yes or no. The decision is complicated and multifaceted, they said, which means persuading them to say yes will be, too.

In North Carolina, the health secretary has said more than half of nursing home workers are declining the vaccine. A national survey found that 15% of health care workers who had been offered the vaccine said no, with nursing home personnel more likely to refuse than hospital staffers.

The trend has concerned public health officials, who say vaccines are among the best ways to protect vulnerable elderly residents who may be infected by asymptomatic staff members. Although long-term care facilities house less than 1% of the nation’s population, they’ve accounted for 37% of covid deaths, according to the COVID Tracking Project. 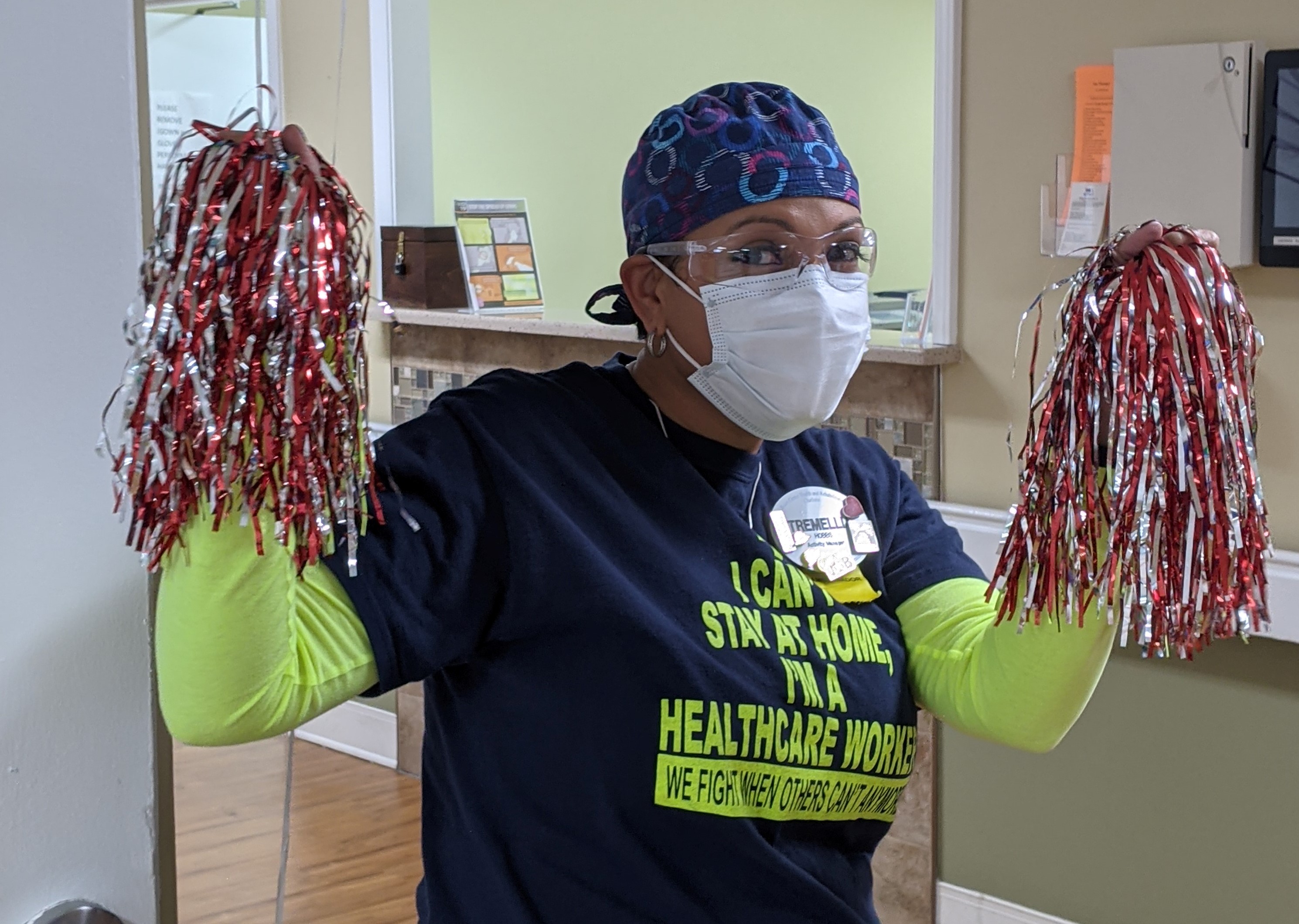 Early reports suggest nursing home residents are getting vaccinated at a higher rate than workers. A CDC analysis of more than 11,000 long-term care facilities found that in the first month of vaccinations, about 78% of residents got at least one dose, but only 38% of staffers did.

But some nursing home staffers say their reluctance is being misconstrued. Most are not saying they’ll never take the vaccine, but simply that they have concerns about such a new product. They understand it went through months of clinical trials, but what about possible long-term side effects, for instance? Or how did politics play into the development process? For communities of color, their historical mistreatment by the medical system can also factor into the decision.

“We should stop saying that people are just saying no,” said Dr. Kimberly Manning, a professor at Emory University School of Medicine who is participating in the Moderna vaccine trial. A Black physician herself, she has been speaking with many Black Americans about the vaccine and instead refers to people as “slow yeses.”

“We just are too impatient to get to the point where we let them get to their yes,” she said. “We’re like the used-car salesman. We’re just trying to close the deal.”

But human beings respond better to empathy and patience than to pressure, Manning said. She tries to ask people about their individual concerns and work from there. Sometimes it’s skepticism about the government’s intentions. Other times it’s worry about how the vaccine may interact with fertility treatments.

“It’s important to not lump anybody into a group and say ‘How dare you just not get vaccinated?’ because you’re a health care worker,” she said. “You’re still a person.” 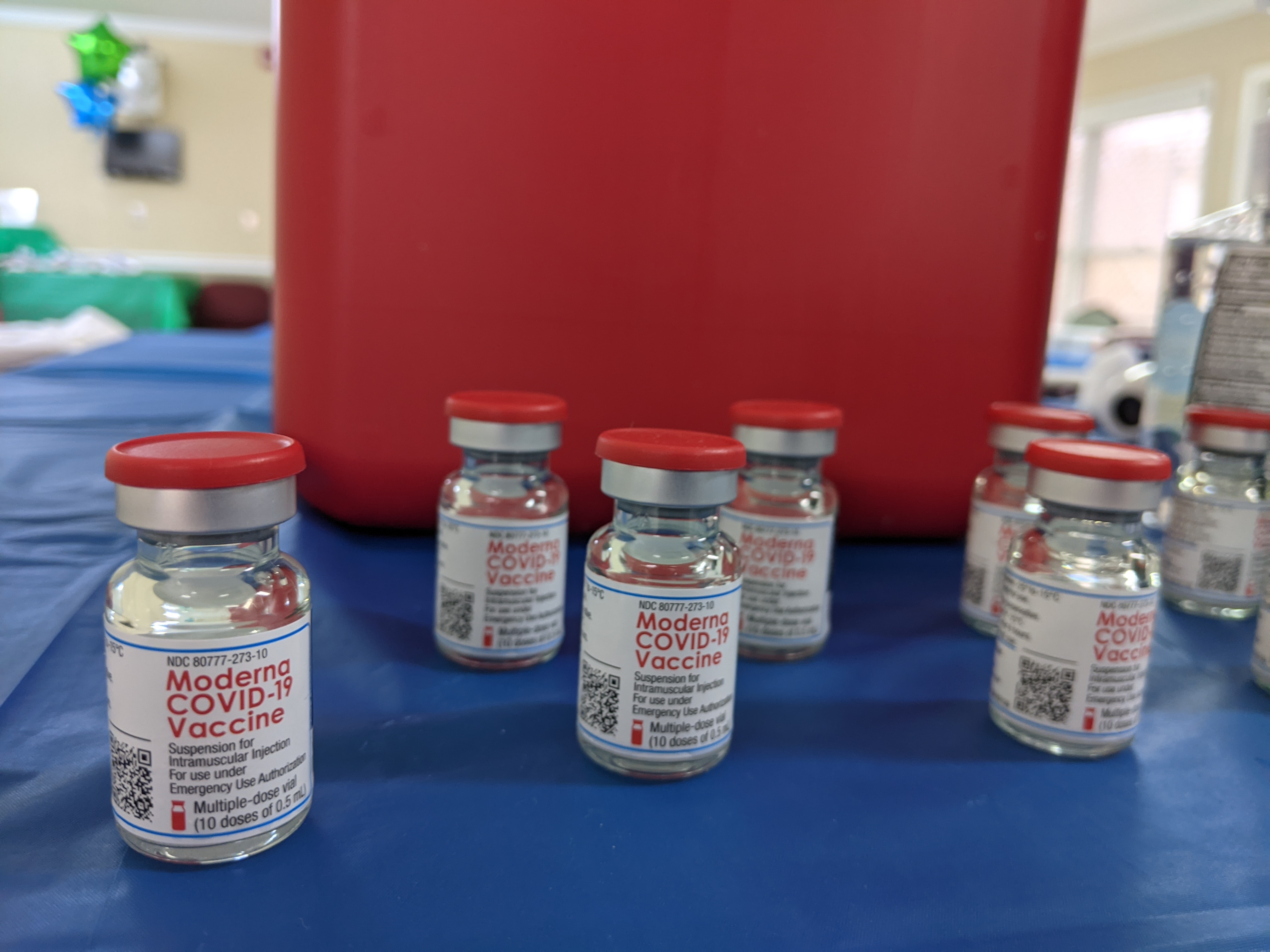 Hobbs, at the nursing home, is not against immunizations in general, she said, and her decision has nothing to do with distrusting the medical system as a Black woman.

“I totally trust the science. I love Dr. Fauci,” Hobbs said. “My thing is the timing.”

She wants to wait and see how others who get the shots fare. In the meantime, Hobbs said, she’ll continue masking, physical distancing and sanitizing — all of which have kept her covid-free for 10 months and which she hopes will continue to protect the residents, each of whom she knows by name and favorite activity.

Caitlyn Huneycutt, a certified nursing assistant at the center, also opted out of getting a shot — but for an entirely different set of reasons. She expects covid vaccinations will be mandated for health workers in the future, much like other immunizations. And she’ll get them then. But for now, she’s still weighing the risks.

She recently started a new medication and is not sure how it’ll interact with the vaccine. She doesn’t want to bring covid home to her 1-year-old daughter, but she’s also heard of people who received the vaccine and fainted or developed kidney infections. (The Centers for Disease Control and Prevention does not list either of these as common side effects for the two covid vaccines in use.)

“I want to make sure I’m going to be healthy if I take it,” Huneycutt said. 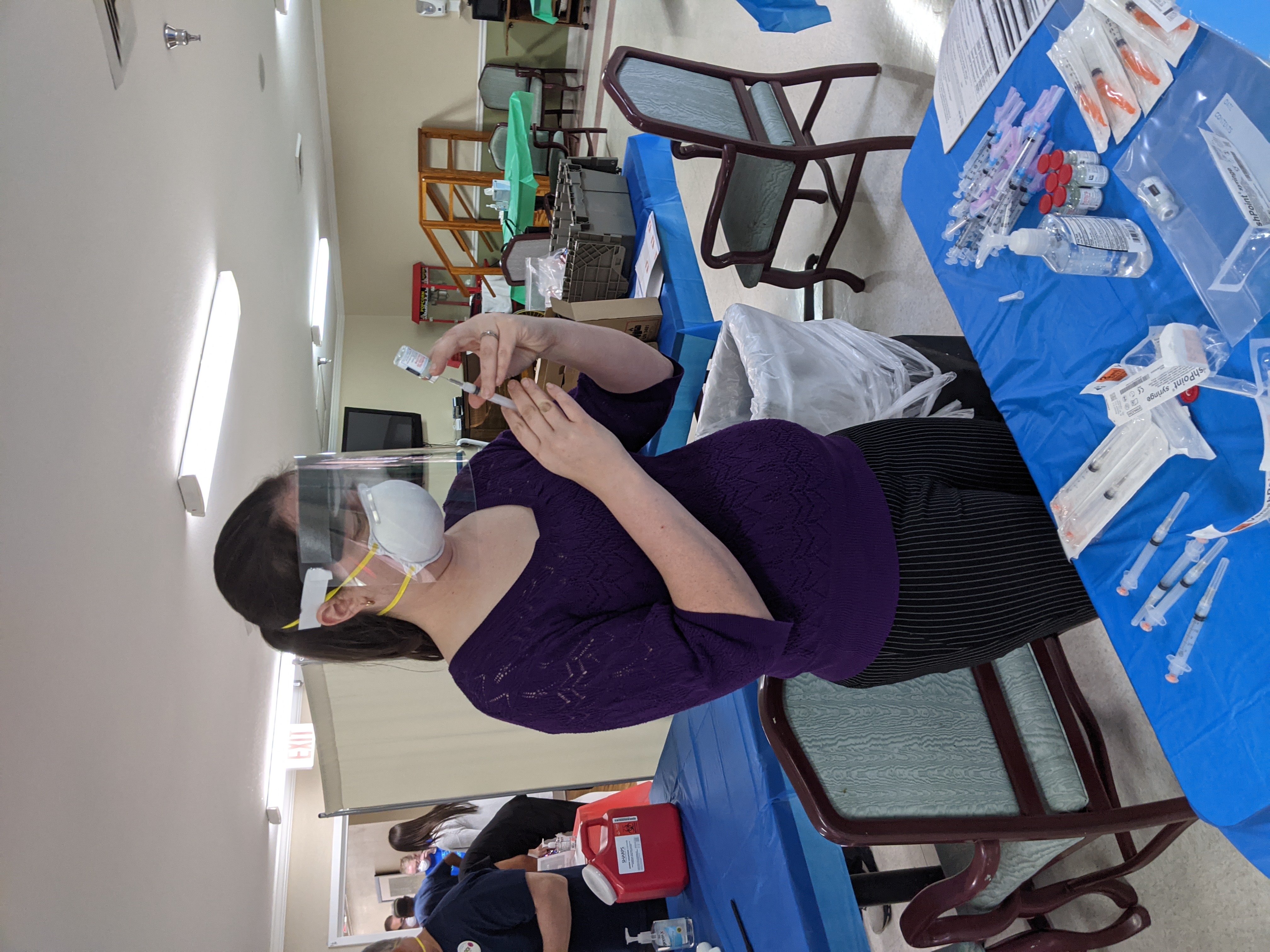 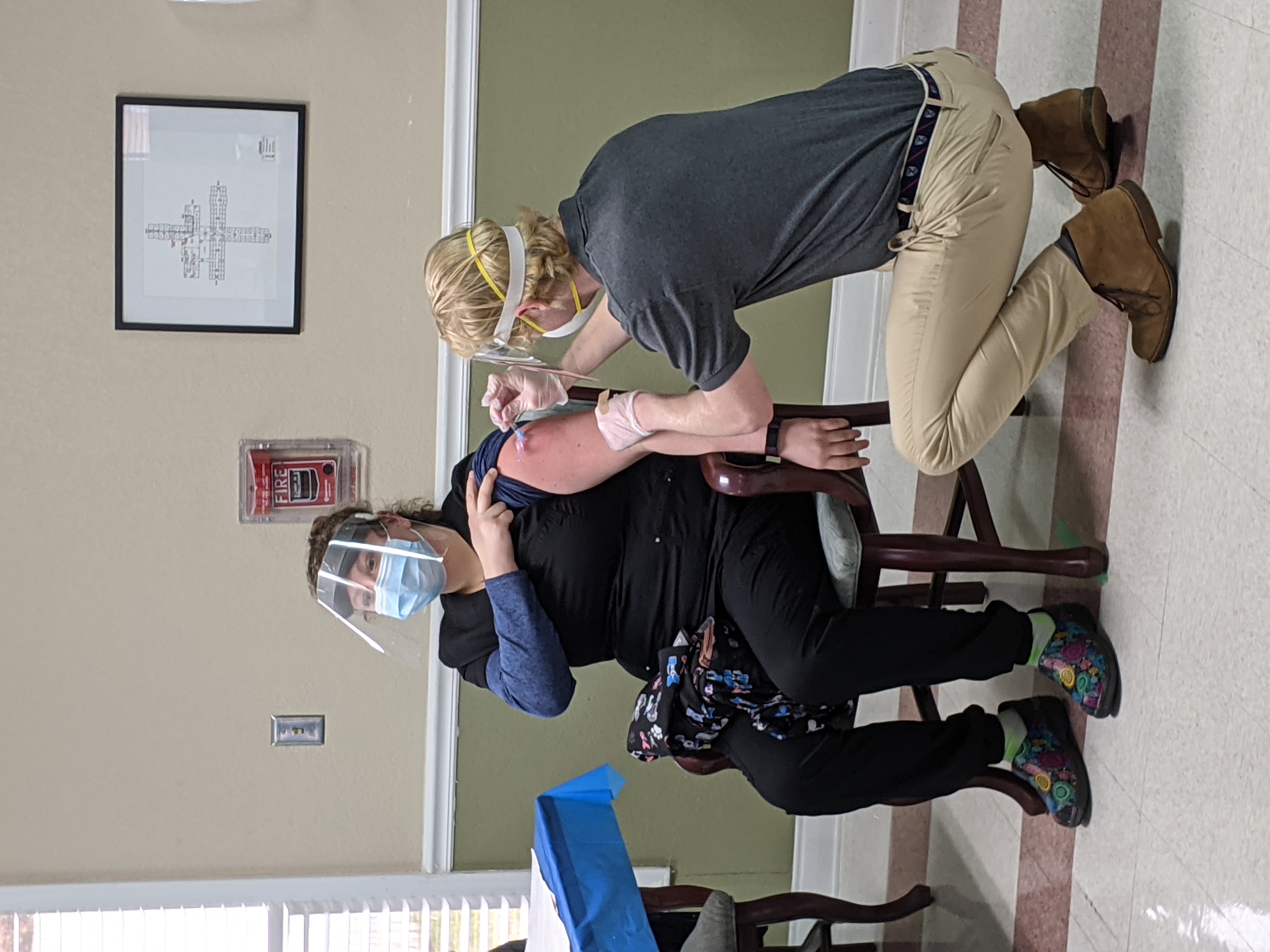 Across the country, nursing homes are taking different approaches to persuade their staffs to get vaccinated. SavaSeniorCare, which owns the Brian Center/Cabarrus, has offered cash to its 169 long-term care homes in 20 states to pay for gift cards, parties or other incentives. For over a month now, the company has also been hosting weekly phone calls to educate staffers about the vaccine and making Sava doctors and pharmacists available to answer questions.

At least one nursing home chain in the U.S. announced it will require all employees to receive a vaccine, but most others, including Sava, have not yet done so.

Stewart Reed, administrator for the Brian Center/Cabarrus, is hoping to lead by example instead.

Reed experienced the harsh reality of covid firsthand and was out of work for two weeks in the fall. In January, he was among the first in line to get the vaccine. For the rest of the day, he popped in and out of the dining hall where shots were being administered to thank staff members for doing their part.

In total, about 48% of staff members and 64% of residents at the center received their first dose of vaccine that day. The numbers are well below Sava’s goal of 90%, Reed said, but the pharmacists will return for two more clinics in the coming months.

“The people that didn’t get it [today] will see that the guys that got the shot are OK,” Reed said. “When the next clinic comes up, they will not hesitate to get their first shot. It ought to go much better.”