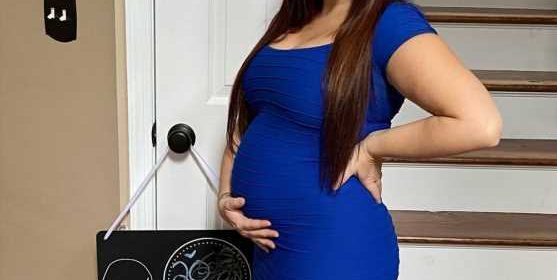 Deena Cortese has decided on a name for her baby boy on the way!

On Friday, the Jersey Shore star — who is expecting her second child husband Chris Buckner — shared a 20-week update with her fans on Instagram and revealed that the couple will be naming their second son Cameron.

"20 weeks today," she wrote in her caption, which accompanied two photos, one from her current pregnancy, and one from when she was 20 weeks along with her first child CJ, who is now 23 months old.

"CJ helped mommy with the weekly update sign today 😂," Cortese, 33, continued. "This pregnancy has been super different from my first .. I feel like I can already feel our little Cameron’s personality." Cortese also explained that when she was pregnant with CJ, her first son "made it known he was in there."

"Sick from the moment I found out until around week 15 .. after week 15 he didn’t go unnoticed he was kicking me and letting me know .. hey I’m in here ! And as you all know CJ is a little riot with super energy and a little ham," the MTV star said.

On the other hand, her pregnancy with Cameron "has been so different."

"For the first 18 weeks some days I’d forget I was even pregnant .. a little tired ..but for the most part super normal," Cortese said. "I just started feeling him this past week .. but he’s very calm in there lol .. some days I get nervous so I throw my home Doppler on and boom there he is .. heart beating at a strong 145-150.. but then it’s like he realized and he moves .. haha I feel like Cameron might be more like his daddy and be more calm and to himself .. but who knows !! This Tuesday I’ll be going for my Anatomy exam.. so praying all goes well and the rest of this pregnancy will be smooth sailing."

Cortese first found out she would be continuing her journey as a boy mom in October, when she and Buckner held a Halloween-themed party to reveal the sex of their second child.

"Looks like CJ is getting a little Brother !!! 💙💙💙 #boymom," she shared on Instagram alongside a photo of the family dressed up in their Coco themed costumes and a blue cake that read, "Boo-y or Ghoul."

Cortese and Buckner, who wed in 2017, also had a Halloween-themed pregnancy announcement that same month. The soon-to-be mom of two wore a Hocus Pocus T-shirt with the famous line, "I smell a child," printed across the front.

Meanwhile, Buckner, 31, wore a hilarious shirt that read, "Can't scare me, my wife is pregnant."

"We’re so excited to announce we’re expecting Baby Buckner #2 May 1, 2021 🥰 Our hearts are filled with so much love and joy! CJ is going to be the best big brother ever!!! #blessed #growingfamily sooo for everyone that was asking YES YES YES ..I’m pregnant ❤️☺️ ," Cortese captioned her announcement post.

"Anotha 1! Love you so much babe. To the best mama bear ever!" Buckner sweetly wrote in the comments section.

Her Jersey Shore costars showered the couple with lots of love, including Nicole "Snooki" Polizzi who did not return for season 4 of Jersey Shore Family Vacation. "YASSS MAWMA so excited for you!" the mom of three, 32, wrote.

Cortese also recently posted an adorable photo of herself cuddling with CJ, writing that there's "nothing like your first born laying on you cuddling while your second little one kicks you from inside the womb 💙💙 #boymom."