Jessica Biel & Justin Timberlake Struggle to Keep Up With 2 Boys When it comes to growing your family it’s kind of a no-brainer that more kids is harder work than fewer kids, even for A-listers! Jessica Biel told Ellen DeGeneres all about the transition from one to two in an appearance on her show, airing Monday. 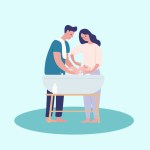 Yes, You Can Get Newborns to Sleep at Night, According to This Super Nanny

Biel was on Ellen to discuss Cruel Summer, the new Freeform drama series she produced, but of course, the conversation quickly turned to the two sons she shares with husband Justin Timberlake.

“Is it much harder to have two?” DeGeneres asked the former 7th Heaven star.

“Oh my gosh yes. A very wise friend of mine said ‘One is, is a lot, and two is 1000.’ And I said, ‘Oh my god, you’re right; that is exactly the way it feels,’” Biel replied. “You are just, you know man-on-man defense, one person’s over here the other persons over here it is a wild, crazy, fun ride.”

According to Biel, Phineas who was born in July 2020 and his big brother, 6-year-old Silas, are pretty much BFFs. “It is so cute to see these two together because they both think the other one is hilarious,” she said. “Silas is the performer. He wants to make the jokes, and he wants the whole attention. He has all the attention on him, so Phin only has eyes for him. Everything Silas does is hilarious and then anything Phin does is hilarious, so they just laugh at each other all day long.”

Sounds like the start of a beautiful brother relationship to us!

Biel admitted that she and Timberlake have also fallen prey to second-child syndrome when it comes to baby Phin’s sleep training. “We never really followed through with Silas in a big way with the sleep training. I think it was also first child. We were nervous. We couldn’t bear the thought [of letting him cry it out]. Now we’re just like, ‘Yeah, yeah, yeah, you’re going to be fine. You’re going to make it. You’ll be OK.’”

These celebrity moms may use weed to help them with that daily juggle.