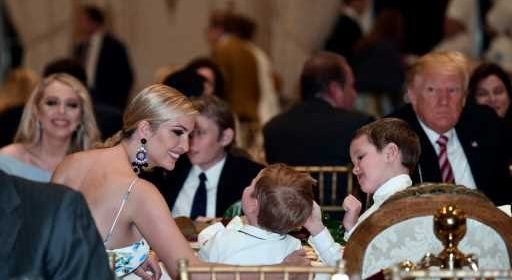 It’s been a busy season for the presidential grandchildren — Ivanka Trump and Jared Kushner’s three kids, Arabella, Theodore, and Joseph. Last month, news broke that the trio had been abruptly pulled out of their longtime school, the Milton Gottesman Jewish Day School in D.C., after classmates’ parents complained the Kushners weren’t following safe COVID-19 protocols. They’ve since enrolled at the Melvin J. Berman Hebrew Academy in Maryland — and have been shown complying with mask-wearing requirements.

But this week, the Kushner kid news is of the uncontroversial variety: As Grandpa Don finally starts to pack up for his exit, Arabella, Theodore and Joseph are leaving their mark on the White House for years to come.

“The Children’s Garden was a gift from President and Mrs. Johnson to the White House in 1968,” Trump explains in her post of the tradition’s origins. “The garden features a goldfish pond, an apple tree, tulips and grape hyacinth. Footprints and handprints of Presidents’ children and grandchildren are embedded in the garden’s paved pathway. 10 more bronze pavers were added by @FLOTUS, handprints of each of President Trump’s grandchildren.”

The siblings were photographed taking part in a decades-long tradition involving the White House Children’s Garden: making cement prints of their hands that are then cast in bronze for posterity. Ivanka shared photos of the process — and the proud kids with their final products — on her Instagram this week.

Just look at those “I did it!” smiles! These are some sweet kids. Maybe there’s hope of seeing Arabella, Joseph and Theodore touring the Biden grandkids around the White House in the coming weeks, a la the Bush-Obama transition? We can dream, right?