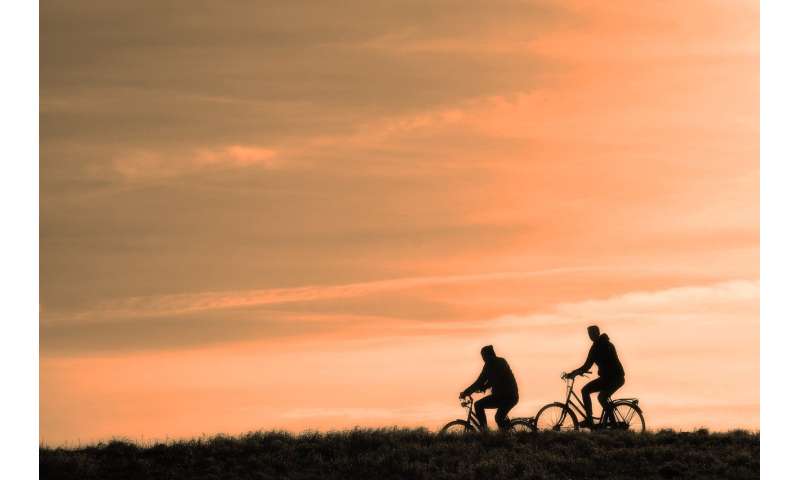 Vigorous physical activity one or two times a week is associated with the lowest death rates in patients with stable coronary artery disease, reports a study published today in the European Journal of Preventive Cardiology, a journal of the European Society of Cardiology (ESC).

The findings come ahead of World Heart Day on 29 September, which highlights that cardiovascular disease is the world’s number one killer, causing 17.9 million deaths a year.

Study author Dr. Simone Biscaglia of the University of Ferrara, Italy said: “The optimum level of exercise is achievable in almost all patients with stable coronary artery disease worldwide—but was only reached in one-third of participants in our study. Walking once or twice a week at a pace that causes shortness of breath or a raised heart rate is all that’s needed.”

It is common knowledge that exercise is healthy for heart patients—but how often and at what intensity is controversial. This analysis of the CLARIFY registry examined these questions. In addition, since most heart patients do little exercise, the study examined the most important determinants of physical activity.

CLARIFY enrolled 32,370 outpatients with stable coronary artery disease from 45 countries in Africa, Asia, Australia, Europe, the Middle East, and North, Central, and South America who were followed up for five years. Patients were divided into four groups according to self-reported physical activity at the inclusion visit:

Patients in the group performing vigorous exercise one or two times per week also had the lowest risks of all-cause death, cardiovascular death, and stroke—19 percent, 21 percent, and 26 percent lower, respectively, compared to the light activity group.

“Stable coronary artery disease patients should avoid being sedentary,” said Dr. Biscaglia. “The goal should be to exercise every week, not to achieve the highest possible frequency, since this is unlikely to be sustainable and does not translate into better outcomes.”

Women were less likely to be physically active than men. Dr. Biscaglia said: “In previous studies we found that women were less often referred to cardiac rehabilitation programs and had less intensive lifestyle counseling. Clinicians should provide the same exercise advice and referrals to women as they do for men, which should result in equal levels of physical activity.”

Other predictors of low physical activity were comorbidities such as peripheral artery disease, diabetes, and previous myocardial infarction or stroke. “Patients with these conditions may worry that exercise could worsen their symptoms,” said Dr. Biscaglia. “But our study shows that they get the same benefit as others with stable coronary artery disease so these conditions should not deter them from being physically active.”