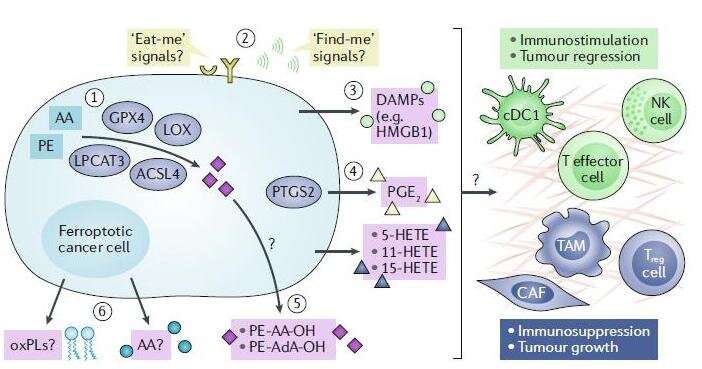 Despite significant advances in medicine, cancer remains the second leading cause of death worldwide (WHO, 2018). One of the main approaches to the destruction of cancer cells, along with cancer immunotherapy, is to initiate cell death through chemo- and radiotherapy. In their article in Nature Reviews Cancer, several researchers have proposed a new look at the role of ferroptosis (a type of cell death) in the development of cancer.

According to Dmitri Krysko, ferroptotic cancer cells can stimulate the immune system and lead to activation of anticancer immunity, thus contributing to the enhancement of the effectiveness of anticancer therapy. In this case, the so-called immunogenic cell death mechanism is launched. “On the other hand, according to published data, tumor cells dying by ferroptosis can cause suppression of an antitumor immune response, leading to the development and progression of a tumor in a human body. Thus, tumor cells that die by ferroptosis are a “double-edged sword,” says Dmitri Krysko.

Cell death is an essential biological process that plays an active role both in human embryonic development and in the onset of various diseases. Every day, about 100 billion cells die in the human body. Cell death is controlled at the molecular, genetic and biochemical levels. Normally, dead cells are absorbed by cells of the human immune system without over-activating the immune system.

Modern antitumor therapy aims to trigger cell death in cancer cells, which, when dying, will activate the immune system. Over the past decades, scientists all over the world have been actively studying the molecular mechanisms of cell death and the interaction of cancer cells with the human immune system.

Ferroptosis is one of 12 types of regulated cell death, which was discovered only in 2012. Ferroptosis is different from other types of regulated cell death, such as apoptosis and necroptosis, and is triggered by the failure of the antioxidant defense mechanisms of cells, which leads to uncontrolled peroxidation of cell membrane lipids and to the death of cancer cells. Cancer cells that die by ferroptosis emit signals through which they interact with the cells of the body’s immune system, which results in either the suppression of the immune response and the progression of the tumor or in the stimulation of an antitumor immune response. This indicates the immunogenic nature of cell death and leads to the involvement of the immune system in the fight against the tumor.

Professor Krysko continues, “In this paper, a fundamentally new concept of understanding the interaction between tumor cells dying by ferroptosis and the cells of the immune system is proposed and a new role of ferroptosis in the development and treatment of cancer is discussed.”

Thus, the authors present some arguments that emphasize the ambiguous role of ferroptosis in the treatment of cancer. Further research directions are defined in this article that will help to answer the question: “Is ferroptosis an immunogenic or immunosuppressive form of cell death?”

Another important aspect is also discussed by the authors, related to the fact that during anticancer therapy tumor cells often acquire resistance to apoptosis, a type of cell death that is most often triggered by modern methods of chemotherapy and radiotherapy. This leads to a decrease in the effectiveness of treatment and the progression of cancer. In this case, it is important to use new methods of treatment aimed at launching alternative types of regulated cell death.

Thus, the launch of ferroptosis may help to overcome the resistance to cell death and increase the effectiveness of anti-tumor therapy. At this stage, it is too early to speak about the commercialization of these research results, since more fundamental research is required, including studies on mouse models. It is necessary to test and study in detail the feasibility of launching ferroptosis to enable the introduction of this method into clinical practice in the future.

“I would like to note that in 2018, UNN launched a unique project to study immunogenic cell death in gliomas, some of the most aggressive and metastatic brain tumors,” says Professor Krysko.

Lobachevsky University researchers led by Professor Dmitri Krysko and Dr. Maria Vedunova, Director of the UNN Institute of Biology and Biomedicine, are studying the immunogenicity of cell death in gliomas in the framework of the Russian Science Foundation project No.18-15-00279 “Mechanisms of cell death in photodynamic therapy of neuro-oncological diseases”.