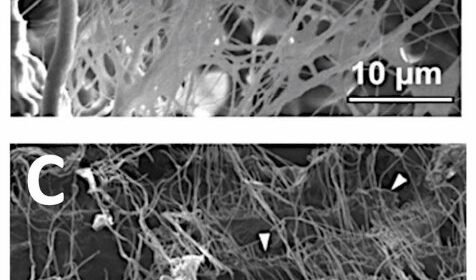 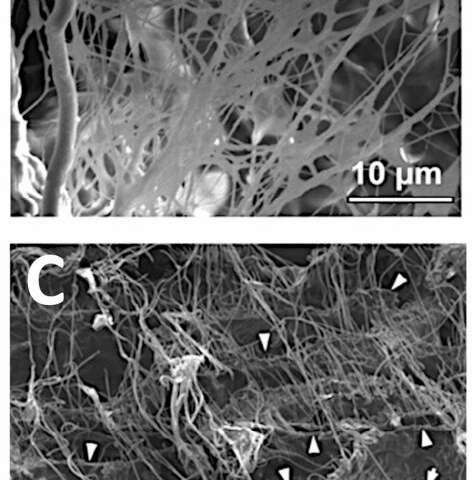 A team of researchers at Johns Hopkins School of Medicine has developed a gel that, when injected into test animals, allowed new soft tissue to grow—replacing lost tissue. In their paper published in the journal Science Translational Medicine, the group describes their work developing the gel and how well it worked in test rats and rabbits.

When a person loses a chunk of soft tissue due to an accident, infection or surgical procedure, surgeons have very few options available to induce the body to regenerate the missing tissue, leaving patients with disfiguring reminders of their loss. In this new effort, the researchers have developed a new gel that shows promise as a soft-tissue regenerative tool.

To make the gel, the team created nanofibers using a polymer that was known to biodegrade easily. It has been used for several years in real medical applications. Next, the nanofibers were treated to allow some of them to bind with hyaluronic acid—it, too, has been used in real medical applications—in this case, to create gels that promote infiltration by macrophages, which leads the body to create blood vessels. The result was an easily injectable gel that could serve as a scaffolding that also promotes regeneration of lost soft tissue. The researchers note that the gel was very close in feel to real tissue, both resilient and soft.

The researchers tested their gel by removing tissue from lab rats and rabbits and then filling the cavities with the gel. They report that the gel very easily conformed to the shape of the cavity before it firmed up. But more importantly, macrophages appeared and began infiltrating the gel and sending out signals that induced the body to create new cells and blood vessels inside the gel as it biodegraded. The end result was regeneration of lost tissue. The researchers note that the gel assisted in regenerating missing soft tissue up to 10 cubic centimeters, which, they further note, is about the size of a human finger. Clinical trials to test the new gel in humans could come very quickly, as all of the ingredients are already used in other medical applications.