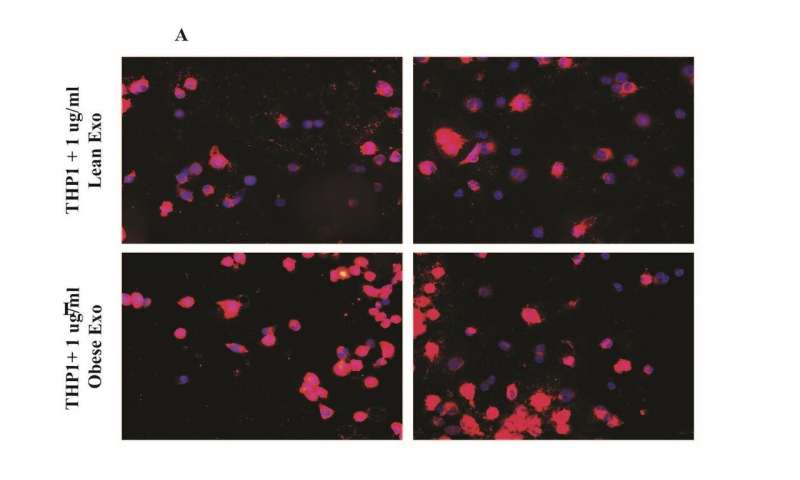 A multi-institutional team led by research faculty at Children’s National in Washington, D.C., finds that extracellular vesicles (EVs) derived from kids’ fat can play a pivotal role in ratcheting up risk for atherosclerotic cardiovascular disease well before any worrisome symptoms become visible. What’s more, the team showed that EVs found in the body’s fat stores can disrupt disposal of cholesterol in a variety of kids, from lean to obese, the team reports online July 22, 2019, in the Journal of Translational Medicine.

In atherosclerosis, blood vessels that carry oxygen-rich blood throughout the body become inflamed, and macrophages settle in the vessel wall and become overloaded with cholesterol. A plaque forms that restricts blood flow. But it remains a mystery how fat cells residing in one place in the body can trigger mayhem in cells and tissues located far away. EVs seemed likely troublemakers since they enable intercellular communication.

“We found that seven specific small sequences of RNA (microRNA) carried within the extracellular vesicles from human fat tissue impaired the ability of white blood cells called macrophages to eliminate cholesterol,” says Robert J. Freishtat, M.D., MPH, senior scientist at the Center for Genetic Medicine Research at Children’s National and the study’s senior author. “Fat isn’t just tissue. It can be thought of as a metabolic organ capable of communicating with types of cells that predispose someone to develop atherosclerotic cardiovascular disease, the leading cause of death around the world.”

Research scientists and clinicians from Children’s National, the George Washington University, NYU Winthrop Hospital and the National Heart, Lung and Blood Institute collaborated to examine the relationship between the content of EVs and their effect on macrophage behavior. Their collaborative effort builds on previous research that found microRNA derived from fat cells becomes pathologically altered by obesity, a phenomenon reversed by weight-loss surgery.

Because heart disease can have its roots in adolescence, they enrolled 93 kids aged 12 to 19 with a range of body mass indices (BMIs), including the “lean” group, 15 youth whose BMI was lower than 22 and the “obese” group, 78 youths whose BMI was in the 99th percentile for their age. Their median age was 17. Seventy-one were young women. They collected visceral adipose tissue during abdominal surgeries and visited each other’s respective labs to perform the experiments.

“We were surprised to find that EVs could hobble the macrophage cholesterol outflow system in adolescents of any weight,” says Matthew D. Barberio, Ph.D., the study’s lead author, a former Children’s National scientist who now is an assistant professor at the George Washington University’s Milken Institute School of Public Health. “It’s still an open question whether young people who are healthy can tolerate obesity—or whether there are specific differences in fat tissue composition that up kids’ risk for heart disease.”

The team plans to build on the current findings to safeguard kids and adults against future cardiovascular risk.