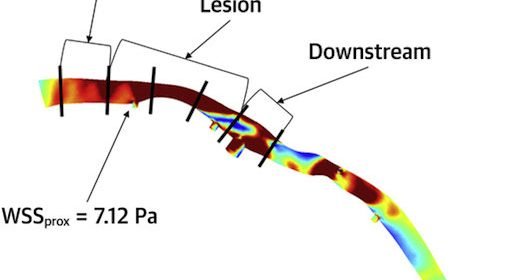 A heart attack is like an earthquake. When a patient is having a heart attack, it’s easy for cardiologists to look at a coronary artery and identify the blockages that are causing trouble. However, predicting exactly where and when a seismic fault will rupture in the future is a scientific challenge – in both geology and cardiology.

In a recent paper in Journal of the American College of Cardiology, Habib Samady, MD, and colleagues at Emory and Georgia Tech show that the goal is achievable, in principle. Calculating and mapping how hard the blood’s flow is tugging on the coronary artery wall – known as “wall shear stress” – could allow cardiologists to predict heart attacks, the results show.

“We’ve made a lot of progress on defining and identifying ‘vulnerable plaque’,” says Samady, director of interventional cardiology/cardiac catheterization at Emory University Hospital. “The techniques we’re using are now fast enough that they could help guide clinical decision-making.”

Here’s where the analogy to geography comes in. By vulnerable plaque, Samady means a spot in a coronary artery that is likely to burst and cause a clot nearby, obstructing blood flow. The researchers’ approach, based on fluid dynamics, involves seeing a coronary artery like a meandering river, in which sediment (atherosclerotic plaque) builds up in some places and erodes in others. Samady says it has become possible to condense complicated fluid dynamics calculations, so that what once took months now might take a half hour.

Previous research from Emory showed that high levels of wall shear stress correlate with changes in the physical/imaging characteristics of the plaque over time. It gave hints where bad things might happen, in patients with relatively mild heart disease. In contrast, the current results show that where bad things actually did happen, the shear stress was significantly higher.

“This is the most clinically relevant work we have done,” says Parham Eshtehardi, MD, a cardiovascular research fellow, looking back on the team’s previous research, published in Circulation in 2011.

How did the Emory researchers find a large group of people who were at risk of having a heart attack, with well-mapped coronary arteries? They tapped into an ongoing debate about who needs to have a stent, a small tube that keeps a coronary artery open. It has been unclear whether it’s better to pre-emptively implant a stent for someone who has stable disease.

Samady and his team extracted data from a large multi-center clinical trial called FAME-II, which evaluated whether measuring FFR (fractional flow reserve) can help doctors make decisions about stents. FFR looks at how much a blockage reduces flow compared to the maximum possible. The group of people they were interested in were patients who had an abnormal FFR, and were being treated with statins and other preventive medicines only. These patients were at risk of having subsequent chest pain or a heart attack, but as controls in the FAME-II study, didn’t get stents.

During three years of the FAME-II study, out of 441 patients being treated medically, 34 had heart attacks. The Emory/Georgia Tech researchers were able to analyze the coronary arteries of 29 people who experienced heart attacks, and compared them to 29 study participants who didn’t have heart attacks, but were equally ‘at-risk’ based on their FFR value.

Looking at wall shear stress, the differences between people who had heart attacks and didn’t were the greatest at the throat of the lesion, the problem area of the coronary artery. And measuring shear stress provided more information, in terms of predicting heart attacks, compared with FFR by itself.

What’s next? Ideally, confirmatory studies. Samady says his group has been looking at using non-invasive CT, instead of catheterization and angiography, to get the structural information about coronary arteries. They are also planning to harness the fluid dynamics approach to study patients after they have a heart attack and have a stent implanted, looking at what happens in other arteries.