Model organisms refer to non-human organisms that are used in the laboratory to understand the structure and function of animals by means of examining their biological processes. These are typically preferred for their ease of rearing, useful current knowledge of their growth and development, cost-effectiveness, similarity to the target organisms, and shorter rearing time.

Insects have been used as model organisms for many decades, including the fruit fly Drosophila melanogaster, the cockroach Periplaneta americana, and the silkworm Bombyx mori. Many others are being used nowadays due to the many and obvious qualifications of insect model organisms. 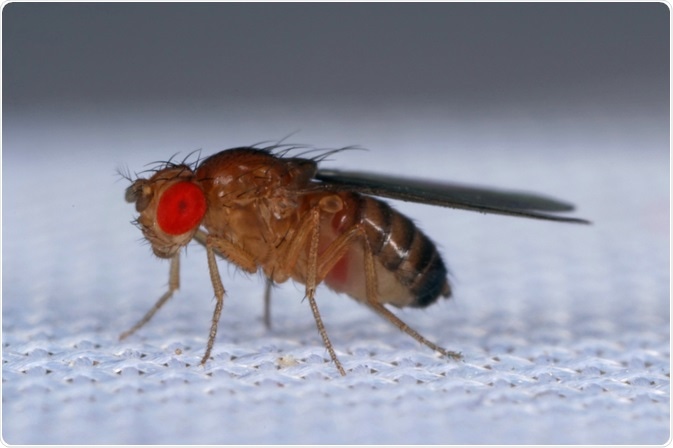 Biomedical research aiming at uncovering the biological processes that underlie basic life processes like feeding, reproduction, immunity, and neurotransmission owes much to insects.

Many insects have organ systems that share a high degree of similarity with vertebrates. The neuroendocrine and immune systems show useful similarities, which could indicate the presence of highly conserved genes among insects and humans. This could help investigate the pathogenesis.

Hormones and neuropeptides in insects and humans are often identical or closely related, thus being very informative about how signaling molecules work. While the hypothalamo-pituitary axis in humans is not strictly replicated in insects, they do have hormone-producing neurons are called neurosecretory cells (NSCs).

These are located in groups within the brain, projecting to peripheral target organs which, like the pituitary, have storage and secretory lobes. These studies could help understand how neuroendocrine regulation works, as well as its dysregulation in various disorders. It could also reveal bioactive substances that could give rise to new therapeutic agents.

Feeding and energy regulation is another important area of endocrine and neuroendocrine control. The hormones such as leptin, ghrelin, and cholecystokinin (CCK), as well as neuropeptides, like neuropeptide Y or orexins that are found in vertebrates, including humans, are often found in some analogous or homologous form in insects, such as the CCK-like sulfakinins.

In cardiovascular disease, an intensive area of research among humans, the heart and myocardium in insects provides a good model for biomedical studies. Many insect neuropeptides and neurotransmitters, as well as peptide hormones, have structures similar to those of human chemicals.

An example is the class of human myocardium contractility inhibitors called myosuppressins, which act similarly in insects as well, providing low-cost easily synthesized drug candidates. The receptors for myosuppressin in humans and insects are also similar to G protein-coupled receptors.

Insect flight is extremely energy-intensive, and as such requires very efficient recycling of the energy currency molecule adenosine triphosphate (ATP) via hydrolysis to release energy, and regeneration to store more energy captured via the breakdown of glucose and other fuel molecules.

The insights gained from such studies could be useful in enhancing our understanding of exercise-related fatigue and performance, such as the shift from the use of glucose as the primary fuel to lipids.

Somatostatin in humans is found to have a similar structure to the corresponding structures in insects, with similar inhibitory effects on the tissues. This could help understand growth in humans, as well as the development of new ligands to treat endocrine disorders such as Cushing’s disease or acromegaly.

The development of gene sequencing methods has led to an increasing use of genetic manipulation to understand what effects different genes cause and to identify targets for modification.

Oxytocin and arginine vasopressin are nonapeptides that are released by the posterior pituitary, and play a role in many bodily processes including osmoregulation, social behaviors like bonding between individuals, memory, and learning.

The corresponding molecules in insects show some highly conserved positions, while the receptors are also very similar to those in insects. Various compounds that bind to these receptors could therefore be useful in treating various disorders of osmoregulation, cardiovascular, or some mental disorders.

Immune mechanisms in insects are mostly innate in nature but involve both humoral and cellular responses. It is based on pathogen recognition by cells called hemocytes, which are stimulated by humoral mechanisms.

Here again, insects act as useful models for vertebrate processes, with similar pathways from receptors to transcriptional factors. Different insects have varying levels of conservation of genes concerned with immune function and regulation. Moreover, many complete beetle genetic sequences are now available for use in genetic manipulation.

Insects also supply a rich array of compounds with the potential for antimicrobial and anti-tumor activity, as well as pesticides. They also offer a low-cost high-breeding model organism for the evaluation and testing of new compounds, whether synthetic or natural in origin.

Compounds called defensins, which are not cytotoxic to healthy mammalian cells may be useful in tumors due to their negatively charged cell membranes, with the induction of apoptosis and necrosis. Other non-peptide compounds like cantharidin also have the potential for multiple anti-tumor activities.

Bioconversion of this compound by bacteria grown on media containing cantharidin resulted in reduced toxicity to the mucosal membranes as well as higher anti-cancer activity in many human cell lines.

Many other anti-inflammatory compounds have also been discovered, such as blapsols, which inhibit cyclo-oxygenase activity. Another interesting direction is the development of anti-adipogenic compounds from T. Molitor larvae without cytotoxic effects, reducing up to 90% of the fat content in mature fat cells of mice. Anticoagulant properties have also been reported in some compounds.

Preclinical research on drugs requires to be carried out in two non-human species at least, which has led to the exploration of insect models for this purpose. Moreover, epigenetic effects of drugs can also be explored, including psychoactive drugs like benzodiazepines, and anti-arrhythmic drugs like cardiac glycosides, on the heart.

Unique mutations such as the PTEN-induced kinase 1, hPINK1, gene in early-onset hereditary Parkinson’s disease are difficult to study in humans due to its inactivation in vitro, but insect analogs retain their activity. In addition, such studies are useful in identifying tissue-protective receptors against hypoxic damage in neurons, which could be then explored in vertebrates.

Research into aging processes, including the functional deterioration of the heart and the emergence of arrhythmias with age, has gained much from insect studies, which simplify the mechanism by making it possible to avoid lifestyle and other disease factors.

The heart in insects is an excellent model since these organisms are short-lived, with simple hearts, and many conserved genes, while they do not depend solely on the heart for life-sustaining oxygen. Drugs that act on the heart may also be usefully tested in insects.

Beetles are good candidates to play roles as models in a broad range of trials. This applicability also arises from the fact that in contrast to vertebrates, insects breed rapidly, produce many offspring, and are more ethically acceptable, which allows them to be used for high-throughput screening, including tests concerning the effects of pharmaceuticals and other active compounds.”

How Leeches are used in Modern Surgery | Earth Lab