Pyogenic granuloma is a somewhat common lesion which affects the skin and oral mucous membrane. It is a soft vascular lesion or hemangioma, with an inflammatory component. It is characterized by bleeding readily in response to even minor trauma because of the numerous fragile blood vessels in it. It is classified with the reactive hyperplasias, that is, conditions which develop because of chronic recurrent injuries which result in excessive reparative processes within the traumatized tissue. 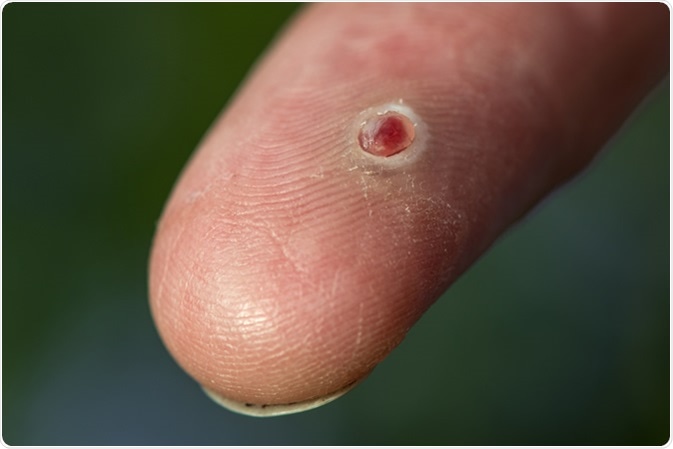 Oral pyogenic granulomas are most often seen in the gums, in three out of four cases. It is thought that it arises because of poor hygiene in the mouth, with resulting gingivitis. The factors that precipitate the development of these oral lesions include:

In most other cases as well, trauma (usually minor) or chronic irritation is thought to be at least partly an etiological factor.

Factors which may contribute to the formation of pyogenic granulomas include:

Staph and strep infections are putative infectious agents in this condition. Human herpes virus 8 has also been postulated to play a role. Other pathogens which release humoral factors such as angiopoietin-1, and angiopoietin-2, that encourage blood vessel formation, are also being studied for their part in this phenomenon. These include some Bartonella species.

Bacterial strains often observed in these lesions may not be causative but rather contaminants from the superficial surrounding skin. However, staph and strep may cause oral pyogenic granulomas because they can grow into mycoid colonies.

The pathway may operate as follows:

Following trauma, reparative processes begin in the injured tissue, of which the fundamental step is granulation. This term applies to the formation of friable vascular tissue rich in inflammatory cells, which migrate into the injured area, proliferate, and attract endothelial cells, fibroblasts, and extracellular matrix. Cytokines such as heparin-binding bFGF (basic fibroblast growth factor), an angiogenic protein and fibroblast mitogen, are released from the macrophages and mast cells at the site of the lesion, resulting in exuberant angiogenesis and neovascularization. This is supported by the pronounced capillary component of these growths.

Other cytokines contributing to angiogenesis coupled with a powerful chronic inflammatory reaction include VEGF (vascular endothelial growth factor), as well as growth inhibitors like angiostatin and TSP-1. Angiopoietin-1 and 2, ephrin B2 and B4, decorin, and connective tissue growth factors, are all implicated in the development of pyogenic granulomas.

The so-called ‘pregnancy tumor’ or epulis is histologically indistinguishable from the pyogenc granuloma of the gum occurring in pregnancy. Again, gingival proliferation occurs during pregnancy and atrophy during menopause, indicating that the gum is sensitive to female hormones. Pyogenic granulomas of the gingiva occur in up to 5 percent of all pregnancies.

The marked increase in the levels of estrogen and progesterone in pregnancy modulates the endothelium of the vessels producing this lesion. It also inhibits inflammatory cell migration, preventing active inflammation but promoting chronic reactions, which predispose to the development of exuberant granulation. However, a telling argument against this hypothesis is the absence of any gender predilection for this tumor.

Some drugs such as oral contraceptives, systemic retinoids and protease inhibitors sometimes precipitate the development of multiple pyogenic granulomas, though the mechanism is not yet clear.