Who is at fault for COVID-19 crisis? Most Americans blame U.S. government, survey says 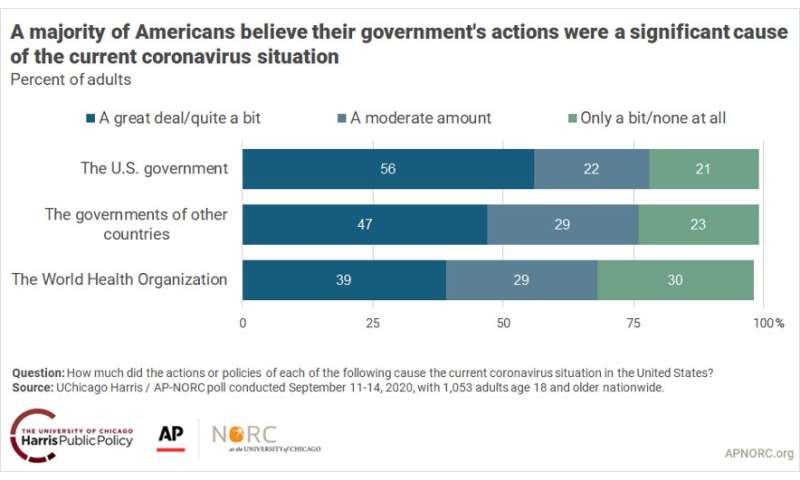 More Americans say the actions of the United States government caused the coronavirus situation in the country than attribute it to the policies of foreign governments or the World Health Organization.

A new study from the University of Chicago Harris School of Public Policy found that 78% of Americans believe that U.S. government policies caused the COVID-19 crisis in the country—including 56% who think those policies mattered “a great deal.”

Conducted jointly with the Associated Press-NORC Center for Public Affairs Research, the study is being released on the eve of the 2020 Pearson Global Forum—an Oct. 6-8 virtual event hosted by Harris Public Policy that will bring together researchers and policymakers to develop strategies to prevent and resolve international conflicts.

Americans are also more likely to say the United States should have a major role in developing a coronavirus vaccine (78%) than to say the same about the World Health Organization (57%), countries in the European Union (55%) and China (51%).

Yet, only 57% intend to get a vaccine when it is available, and that figure declines to 46% if the vaccine were to be developed outside the United States.

If the United States develops a vaccine, a majority say it should be kept for Americans first, even if that means fewer around the world are vaccinated right away.

“A portion of Americans seem to want to keep the vaccine for Americans first, even if they don’t want to get it themselves,” said Austin Wright, an assistant professor at Harris who is an affiliate of the Pearson Institute for the Study and Resolution of Global Conflicts. “Republicans are especially likely to say that the vaccine should be kept for Americans first, even if they are less likely to say they will get vaccinated.”

The poll shows a stark partisan split on who is to blame for coronavirus situation in the U.S., as well as on the development and distribution of a vaccine. For example, more than half of Republicans (55%) fault the World Health Organization for the coronavirus situation in the U.S., compared with just over a quarter of independents (28% ) and Democrats (27%). And only 39% of Republicans want the World Health Organization to play a major role in vaccine development, compared with 59% of independents and 75% of Democrats.

The poll also found that 58% of Americans—including 79% of Republicans—say the United States should keep any vaccine for itself, even if that means fewer around the world get vaccinated. Only 39% of Americans say the vaccine should be made immediately available to other countries.

At the same time, Republicans are less likely than Democrats to say they will get a vaccine, regardless of whether it is developed in the United States (42% vs. 70%) or elsewhere (33% vs. 58%).

“The poll shows how Americans’ attitudes about who should lead the development of a vaccine and whether people will get a vaccine have become highly partisan,” said Trevor Tompson, director of the AP-NORC Center. “The findings highlight the significant challenges surrounding the global development and distribution of a vaccine.”