When the Menu Turns Raw, Your Gut Microbes Know What to Do

It was a challenge unlike any other the chef-turned-graduate student had faced: Vayu Maini Rekdal had to create a menu where every ingredient could be eaten either raw or cooked. No pickling was allowed, nor fermented toppings like soy sauce or miso. Nothing could be processed in any way, so things like tofu were out. And the more sweet potatoes he could serve up, the better.

“It was extremely challenging,” said Mr. Rekdal, a chemistry graduate student at Harvard.

Rising to the occasion, Mr. Rekdal concocted chia seed breakfast puddings that could be cooked or chilled. He made raw and cooked pea-sweet potato-tahini patties. And for three days, eight volunteers dined on the unusual menu, providing stool samples to assist in research that could eventually help illuminate the evolution of the human microbiome.

The work was led by Rachel Carmody, a professor of human evolution at Harvard, and Peter Turnbaugh, a professor of microbiology at the University of California, San Francisco. They were studying the gut microbiome, the collection of microbes that live in our intestines and influence our immune system and various other parts of our biology, as well as help us digest food.

They had discovered that mice, eating a diet of starchy foods like sweet potatoes, developed vastly different microbiomes, depending on whether their food had been cooked or served raw. A switch from one to the other provoked a rapid shift in their guts’ microbial inhabitants.

Now, they wanted to see if the same was true with humans.

The results of the experiment appear in a paper published last month in Nature Microbiology. Although the sample size was small, and the effect was not as strong as in mice, people’s microbiomes do seem to shift on a raw diet, and very rapidly. While the human study was very short, it raises intriguing questions about whether starting to eat cooked food, eons ago, shaped the evolution of the organisms that live inside us, and whether our bugs may have helped us survive times of scarcity.

As a graduate student, Dr. Carmody found that mice fed cooked diets quickly grew plump. Cooking alters the structure of many molecules, making more energy available to the mice. But she was also interested in the microbial community living in the mouse gut, which helps digest food and interacts with its host’s biology in a variety of ways.

In the new paper, she and her collaborators found that feeding mice meat that was raw or cooked changed little about their microbiomes. But with sweet potatoes, meant to stand in for tubers that early humans might have eaten, it was a different story.

Cooking produced significant changes, affecting the kinds of microbes that thrived and which genes they used.

The scientists traced the effect to the sweet potato’s starches, which are difficult for mammals to digest raw but become more easily digestible once cooked. Depending on which kind of starch molecules arrive in the large intestine, different groups of microbes might take on the disposal job and subsequently surge in numbers.

“Like any ecosystem, if you dramatically change foodstuffs coming into it, some species will thrive over others,” Dr. Carmody said. 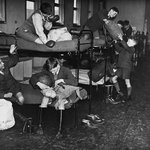 What Does Your Microbiome Say About You?

There are many, many microbial species living in or on your body. What secrets can they tell?

The researchers also found that raw sweet potatoes inflicted an impressive amount of damage on the microbiome of the mouse gut, similar to what occurs in mice fed an antibiotic. That may result from antimicrobial compounds in the sweet potato, which may be inactivated by cooking.

If cooking, at least of starches, can alter the ecology of the gut, then have humans been shaping our microbiomes ever since we learned to put prehistoric tubers in the fire? If our ancestors did eat these kinds of foods, and switched to cooking them, it may be that some tasks that used to be handled by gut microbes were no longer necessary, says Stephanie Schnorr, a biological anthropologist at the University of Nevada, Las Vegas, who was not involved in the study. As a result, the bacteria might have lost the related genes or gained new roles.

The ability of the gut’s microbial residents to shift themselves so dramatically even in the short term may have had other benefits for their hosts. If microbiomes can retool themselves on little notice to handle changes in diet, they may have helped early humans cope with lean days where tubers were the only foods or times when only meat was on the menu.

“The microbiome could essentially help us, within 24 hours, maximize our ability to digest nutrients even on a low-quality diet,” Dr. Carmody said.

Still, the extent to which humans and their live-in digestion engines evolved together is debated. Mice given human microbiomes are generally healthy, suggesting that a host and its microbes don’t fit together like a lock and key, honed by eons of mutual evolution. However, in some situations, like when a mouse gets sick, it is more likely to recover when it has its own microbiome. That may imply that there has been some co-evolution between the organism and its microbiome, Dr. Carmody said.

The interaction between host and microbes is complex, and longer studies with more people eating a raw or cooked diet would be necessary to probe how such a dietary change affects the microbiome and its host in the longer term.

People actually did enjoy the menu, by and large, Mr. Rekdal said, which included salads of mushrooms, sweet potato and cauliflower, either roasted or raw, and smoothies of cooked or raw fruit in addition to the puddings and patties. Some of the raw items weren’t wildly popular, but he has received many requests for the chia pudding recipe.

He sees the study as helping advance our understanding of cooking, a particularly ancient kind of applied chemistry.

“It’s a form of science,” he said, “that humans have been practicing for thousands and thousands of years.”