This article originally appeared in the December 2020 issue of Men’s Health.

LARRY HRYB is the Xbox Director of Programming, although online he’s better known as @majornelson. And for Hyrb, 2020 has been a wild year.

He spent most of it prepping for the release of Microsoft’s next-gen console, the Xbox Series X. Except this was no ordinary console release. Console releases come about once a decade for Microsoft and Sony, and they herald new styles of gameplay and major technological advances that get the gaming community hyped.

A new console means beefier graphics and brand-new video games that look that much closer to real life, and this set of consoles is ultra-powerful.

The thing with console releases: They’re also expensive. A new console, when it first hits the market, typically costs upwards of $299, and very often, it’s much more than that.

A hefty price tag isn’t always a problem (gamers are going to game, after all). But in the year of the coronavirus pandemic, in an atmosphere of financial uncertainty, would that cause problems for Xbox? Hyrb had to be ready for that—and yes, it meant plenty of 2020 stress. Here’s how he beat it.

I came on in 2003 for the launch of the Xbox 360. I was on Xbox Live. That team was about 100, maybe 150 people. It was manageable. Now with thousands of employees spread across the globe, it’s a completely different scale of a problem. Not only do you have people who are everywhere—you’ve got way more of them.

I’ve got my core team pinned to the left side of my chat. I have zero problem clicking them. That’s the virtual way of just dropping by their office.

Be polished on your Zoom calls, too. This sounds silly, but the lighting and audio matters. It sounds vain, but set up your shot, because it shows an extra level of care to the rest of the audience.

Lighting is incredibly hard. Don’t sit in front of the window. Have that natural light from the window shine on you, behind your camera. Make sure your lights are above eye level. Make sure they’re shining down on you. I fuss over all those things. 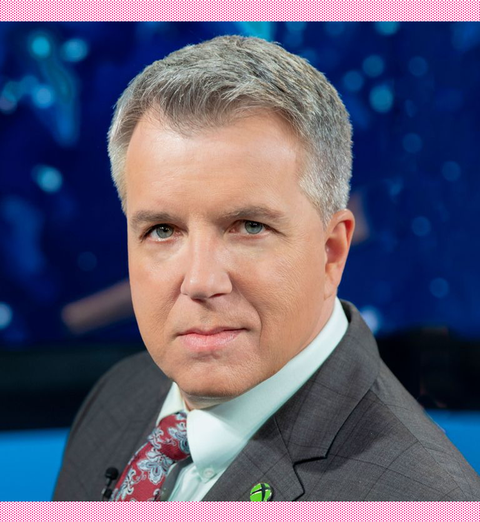 I used to have a screen in bed, a laptop on the nightstand. We don’t have any devices in the bedroom now. I’ve gotta be ruthless. I say, ‘I can’t do this today.’

This is gonna sound kind of against what I do because I’m so social. But just get off social. Go read a book. Relax.