What is Aspergillus niger?

The fungus Aspergillus niger is a type of mould, which can sometimes be attributed to the cause of some cases of pneumonia. It is also the causative agent of ‘black mould’ on the outsides of certain foods, such as apricots, onions, grapes, etc – therefore making Aspergillus niger a food ‘spoilage’ organism.

These are classed as ‘Conidiophores’ – an organism which forms filaments or hyphae, otherwise known as conidia (the a-sexual method of fungal reproduction). The name ‘Aspergillus’ comes from the Latin word ‘aspergillum’, which roughly translates to ‘holy water sprinkler’, referring to the shape of these sprinklers being very similar to how these fungi appear when viewed under a microscope. 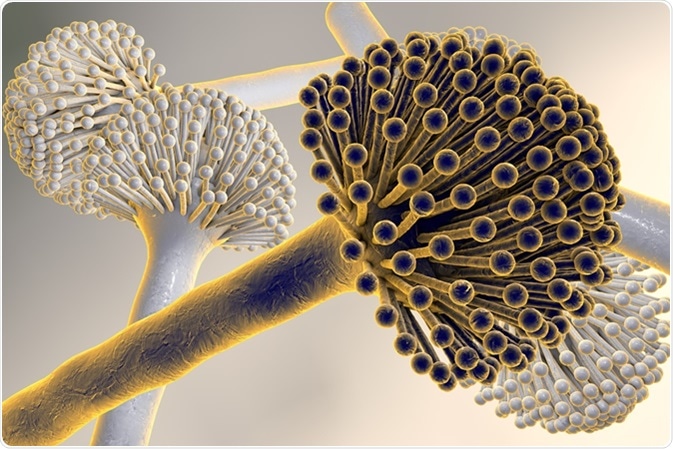 Aspergillus niger has a plethora of strains. The size of different strains of Aspergillus niger, as individual organisms, can range from anywhere between 900-1,600µm in length, with the rough, spherical conidia measuring 3-5µm.

Some strains of Aspergillus niger are known to secrete ochratoxins –mycotoxins which can give rise to nephrotoxicity and renal tumours in a variety of animal species and are potentially hazardous to human health through their consumption. They are released by Aspergillus and Penicillium fungi species. Ochratoxin A, for example, is a problem organism during the bulk storage of grains if the conditions are in any way wet or damp.

More recently, the strain ATCC 16404 strain of Aspergillus niger has had to be reclassified as Aspergillus brasiliensis. This strain was considered similar enough to be classified as the same species, however, with the addition of more research, it was deemed too different – so required a new classification in 2007.

Because this strain of Aspergillus is used frequently in the pharmaceutical industry, the ATCC number and details therefore also required updating inside the U.S. Pharmacopoeia and Europe Pharmacopoeia. 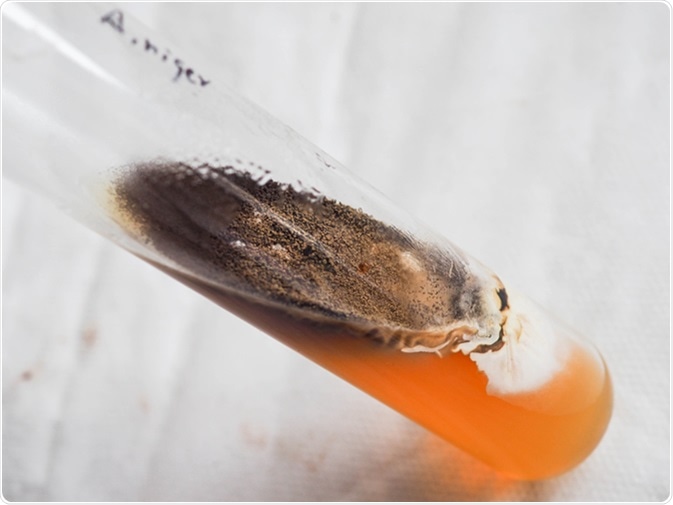 Aspergillus is a group of filamentous fungus can be easily cultivated in laboratory conditions – meaning that they are, therefore, one of the most extensively studied groups of fungus.

The Aspergillus group can, once cultivated, be used to synthesise useful industrial compounds such as ‘glycoside hydrolases’. These enzymes are used in the process of converting biomass into biofuels – by breaking down cellulose and hemicellulose from plant cell walls, into a substance which is later converted into second-generation ethanol. This species can also be used to produce bioactive metabolites, as well as other pharmaceutical products.

Different types of Aspergillus species are known to produce many different types of enzymes – making them very useful for the food industry – if cultivated and adapted correctly. Aspergillus niger can be adapted to produce large amounts of fructooligosaccharides, due to the observably high transfructosylating activity of the enzymes within its surface.

Another industrial use of Aspergillus niger fungus takes advantage of it’s bioabsorption abilities. Certain types of dye (e.g. Congo Red) usually require a certain amount of washing, which then requires possibly harmful dye-removing substances once the waste-water is collected. However, once the dye waste-water is collected and autoclaved, Aspergillus niger colonies can be added to absorb the dye. For example, Blue 9 dye can be removed at a rate of 18mg per gram of Aspergillus niger added to it – making this a relatively efficient method of safe dye removal.

While the genomes of various organisms have been sequenced including those of a variety of fungi, this not the case for various types of filamentous fungi. Using CRISPR-Cas9 gene editing technology, recent studies have demonstrated that Aspergillus niger can be edited the newly edited strain can be used for iterative gene targeting.

The process of killing Aspergillus niger fungus is simple, with the use of basic antifungals usually working best. For example, over forty different antifungals – all from botanical sources – were tested in 2009 to find out which one performed the most efficiently against Aspergillus niger, with the extract of the plant Grewia arborea being found to work best, even in small amounts. In the form of a medication to treat allergic Aspergillosis, the most common treatments include triazole and echinocandin antifungals.

Phoebe Hinton-Sheley has a B.Sc. (Class I Hons) in Microbiology from the University of Wolverhampton. Due to her background and interests, Phoebe mostly writes for the Life Sciences side of News-Medical, focussing on Microbiology and related techniques and diseases. However, she also enjoys writing about topics along the lines of Genetics, Molecular Biology, and Biochemistry.