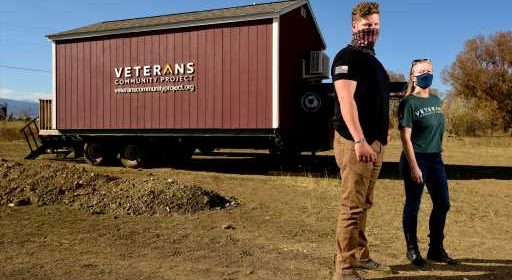 Army veteran Ashley Wallis spent years learning to overcome an inclination to isolate, a symptom of post traumatic stress disorder she faced after her service from 2002 to 2005.

Wallis, 36, of Firestone, worries about the toll the pandemic will take on veterans’ mental health. With the coronavirus continuing to spread and public health orders asking people to stay home as much as possible, she worries veterans may fall into old habits.

“A lot of veterans rely on that in-person group therapy and socialization to have that sense of community,” Wallis said. “Not having that right now has been a big strain. Many veterans are reverting back to staying inside, because that’s a safe thing that we are supposed to be doing. We fought hard to get out more and not let those symptoms of PTSD affect our lives. Now that’s what we have to do, so it’s easy to slip back into those negative coping mechanisms.”

Wallis works for Mental Health Partners, a behavioral health center with offices in Longmont and Boulder. Her work during the pandemic has sought to emphasize that while connection is different in the era of a global pandemic, veterans are not alone.

“There are options for community engagement,” Wallis said. “We would love to see them.”

In an article she wrote for Mental Health Partner’s website, Wallis said she worked to overcome her negative coping mechanisms, including isolation and a propensity to “avoid people to the extreme,” she wrote. Wallis had reached a place where she enjoyed being around people, but the pandemic brought out some regression, she said. She stopped making phone calls and leaving her house.

Calls to the Veterans Crisis Line have doubled during the pandemic, Wallis said. What concerns her most, she said, is the ones not calling.

With the number of coronavirus cases continuing to climb, veterans have faced not just isolation, but job loss and homelessness. In a time when getting connected to resources can be paramount to quality of life, the virus has left them adrift in a world of largely virtual communication.

For Vietnam veteran Tom Daschofsky, it’s been tough not being able to connect with his fellow veterans like normal.

Daschofsky, of Berthoud, was 19 when he served in the Marine Corps. Now 71, Daschofsky is the commander of Longmont American Legion Post 32. Over Friday night dinners and Sunday morning breakfasts, he used to have the chance to build camaraderie with his fellow veterans.

“That’s important to veterans,” Daschofsky said. “You forget about all that comradeship that you had back when you were in service, versus now. It’s good to be able to meet veterans who were also in the same situation that you were. We need to pass this down to the younger generation.”

Those meals and chances to socialize have been brought to a grinding halt by the coronavirus pandemic. The conditions have presented many challenges for veterans and the American Legion.

Normally a hub of activity, the American Legion, which is limited to 25% capacity, hasn’t been able to proceed with regular activities. There’s no more sitting together around plates of food. Parade planning and community engagement projects like passing out six scholarships to youth have been limited to no contact. This year’s Veterans Day parade was among the community events canceled.

The number of coronavirus cases has yet to see a decline in Boulder County. On Friday, the county moved to a more restrictive Safer at Home Level 3 in an effort to curb the fast-spreading, contagious respiratory illness. A record daily high of 292 cases was recorded in Boulder County on Thursday.

Daschofsky has been a commander for six years and part of the American Legion for the last 22 years. He knows the 300 members well, but his own health concerns following a heart attack in March have forced him to be extra-cautious.

“That’s affected my ability to interact closely with a lot of them,” he said. “I’ve had to social distance and try and maintain a safe distance.”

This year has been challenging for veterans and nonveterans alike. Unemployment rates have skyrocketed, and social service organizations, such as Longmont’s OUR Center, are seeing some families facing job loss and homelessness for the first time, with demand for rent and utility assistance increasing by 300%.

Karen Townsend, a veterans service officer for the Boulder County Area Agency on Aging, said she hears panic in the voices of some of the veterans she helps obtain access to benefits. She works with 15 to 25 contacts each day and is seeing three to four new people each day.

Like Daschofsky and Wallis, Townsend worries about veterans being further isolated by the conditions of the pandemic.

Townsend said in her communication with veterans she hears how isolation has been compounded with fears about the virus, a contentious presidential election and job loss.

The Wounded Warrior Project, a nonprofit veterans service organization, released the results of its 11th annual membership poll in September. The poll was sent to members in May and asked how the pandemic had impacted their lives.

The survey showed that more than half of the 28,282 post-9/11 veterans expressed that their mental health had worsened with social distancing, while 49% said their physical health had worsened with social distancing. The survey also showed that 60% agreed with a statement that they felt more disconnected from their family, friends or community. Roughly half said Veterans Affairs had provided them with information on how to continue medical care, and 41% said they had experienced challenges with unemployment, due to the pandemic.

Daniel Savage, a regional veterans employment representative with the Colorado Department of Labor and Employment said he’s seen a larger than average number of veterans in need of job assistance. While Savage’s office is based out of Denver, his job is to work with the Boulder County community to help people facing unemployment find jobs.

“We’ve seen a real increase in the number of vets coming into the system,” Savage said. “What we are seeing more is folks that have lost jobs without the promise of rehire.”

“We’ve seen an increase in that population (60s to 70s), because Social Security is not cutting it,” Savage said.

Younger veterans, such as those 18 to 24, who served but have no other job history, are also struggling to find work, he said.

Nationally veteran unemployment peaked at 11.8% in April, with the rate improving in August to 6.6%, according to an article in the Colorado Business Review. By comparison, nonveterans saw an unemployment peak in April of 14.8%, with that number dropping to 8.5% in August.

At a site on Anderson Street is a model tiny home. It’s an indication of the work already underway by an organization new to Longmont: The Veterans Community Project. The nonprofit’s goal is to eliminate veteran homelessness and is based in Kansas City, Mo. Longmont marks the first expansion site of the nonprofit, according to Sean Anderson, the Longmont branch’s director of Veteran Support Services.

In the months ahead, the roughly 1½-acre dirt patch on Anderson Street will be transformed into a community of tiny homes, created to provide homeless veterans with a place to live and a network of resources to help them.

Anderson is working with 27 veterans to help them find housing. Of those, roughly 20 veterans are from Boulder County, and 17 of them are unemployed. Anderson approximated that 10 of those veterans were unemployed as a direct result of the coronavirus. The nonprofit also provides rental assistance, emergency hotel stays, assistance in transportation and helping people find gainful employment.

“With the high COVID numbers and the way that all the services seem to be taxed right now, as far as homelessness is concerned, people are wondering if the help is coming and how timely it will be to receive that funding,” Anderson said.  “Since March, we have seen more veterans.”

Anderson attributes some of that to fixed monthly incomes that don’t rise with the cost of living.

Anderson also homed in on the loss of human connection that is being felt by veterans. With doctor’s appointments and case management largely done over the phone or computer, veterans aren’t getting the same connection as a face-to-face interaction.

“When you lose that primary case manager at the Veterans Affairs or you stop seeing them in person you aren’t able to explain yourself as well because you’re doing it over the phone and doing it through a Zoom meeting,” Anderson said. “You’re not getting the same level of care. I try to spend as much time with veterans in the field as I can.”

Looking to the future

With social interaction limited, Townsend said she believes the best way the community can give back to veterans right now is to remind them that help is still there.

“We have to remind them about the online opportunities,” she said. “There are writing classes, outdoor activities and online groups that meet, etc.”

Wallis encouraged veterans to get involved in the Veterans Smokepit hosted by Northern Colorado Veteran Resource Center. People can join by contacting TJ Cruz, who helps to facilitate the conversation. His contact info is: [email protected]

Wallis reiterated that veterans aren’t alone, and she encouraged them TO reach out to the resources in their community.

“Connection is the most important thing we can have,” she said. “When we’re serving we have our brothers and sisters (serving around us). Not being able to engage can really damage mental health. Having these options here, we are happy to listen and talk to everybody.”