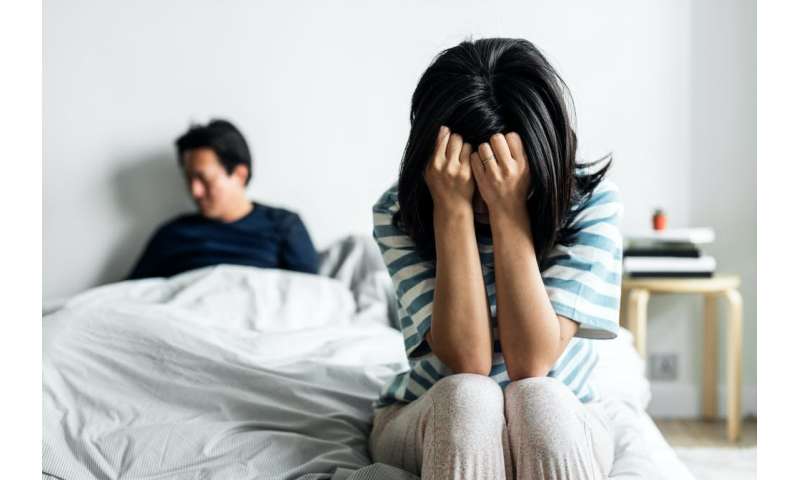 The social and cultural messages we receive around sex give the impression everyone’s “doing it” and it’s always fun and enjoyable. But for many people, having sexual intercourse is extremely painful or impossible. One of the leading causes of painful sex is vaginismus.

Vaginismus is an extremely common condition, that can have a huge impact on women, their partners and relationships. Yet many with it feel alone and without hope as it’s rarely talked about.

But women don’t need to live with it—it’s easy to diagnose and it’s treatable.

Australian research shows about 20% of women and 2% of men experience painful sex.

Male sexual problems, such as erectile dysfunction, have been in the public awareness since the advent of “the little blue pill”—Viagra. But sexual difficulties in women are missing from the story.

Without the push of pharmaceutical industries, awareness and knowledge about sexual difficulties in women (or people with vaginas who don’t identify as women) has not advanced in the same way as it has for men.

A recent study, which is not yet published, found, in 2019 57% of female patients who attended the Sexual Medicine and Therapy clinic (Monash Health) attended because of painful sex. 60% of them had Vaginismus. Almost half of these women had experienced this for more than five years, and it had occurred in around one in five of these women for ten or more years.

Vaginismus occurs when someone has persistent or recurrent difficulties in allowing vaginal entry of a penis, finger or any object, despite her wish to do so.

Some women experience fear, difficulties or pain from the first time they try to insert something into their vagina and instead of getting better, it can get worse over time. This is called “primary vaginismus.”

Others can be fine for years and develop pain at some later date. This is “secondary vaginismus.”

Vaginismus can be mild, moderate or severe. The pain is often described as burning, cramping, or a tight feeling. And for some, nothing can go into the vagina. Sufferers describe it as like hitting a brick wall.

The impact of vaginismus

Those with vaginismus may avoid being sexual, as it can be a very painful experience. They also may avoid any intimacy for fear that it may lead to “sex.” This can significantly impact relationships, leading to distance and conflict.

It can also inhibit single people from forming relationships. They may avoid socializing, dating and meeting new partners, feeling burdened with a “shameful secret.”

When it comes to sex (and life), you can’t separate the mind and the body. Vaginismus is no exception. Underlying causes are extremely variable and often influenced by multiple factors.

Sometimes there is no obvious cause, but common factors in the development of primary vaginismus include:

Secondary vaginismus can occur due to any of the above or after anything that leads to painful sex, such as:

A normal reaction to any anxiety and fear is a tightening of muscles, and vaginismus occurs when this happens in the pelvic floor muscles. A strong pelvic floor is important, but we also need to learn how to relax it, when we want to.

Vaginismus can usually be diagnosed by taking a careful history and looking at which factors may be causing it.

Those who suspect they may have vaginismus should initially seek help from GPs, gynecologists, pelvic floor physiotherapists, sexologists or psychotherapists who have experience with this condition.

Medical professionals who are experienced in treating the condition will do an examination in a gentle, empowering way, only when the woman is ready to, so she is not distressed or traumatized in any way.

Women should be reassured tightness in the pelvic floor is an involuntary, protective response they can learn to overcome, with help.

A multidisciplinary approach of management has been shown to be most effective, this includes:

Woman should also be empowered to feel free to choose if, when and how to be sexual. Many women are either coerced into sex or are compliant for the sake of their partner’s needs.