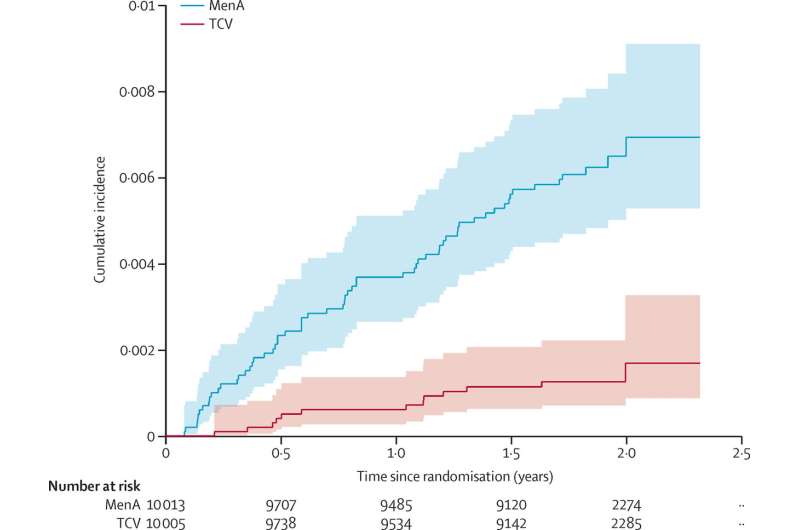 A typhoid vaccine shown in trials to be 79 percent effective, even after two years, is being recommended for use across South Asia, where the food and waterborne disease is widespread.

Typhoid fever is a life-threatening infection caused by the bacterium Salmonella Typhi and affects up to 20 million people annually with symptoms including fever, fatigue, nausea, abdominal pain, and constipation or diarrhea. Around 161,000 people die from it every year, according to the World Health Organization (WHO).

The two existing typhoid vaccines do not provide long-lasting immunity and are not approved for children younger than two years old, whereas the new typhoid conjugate vaccine (TCV) is approved by WHO for use in children from the age of six months.

Results of the study, published November in The Lancet Global Health, showed that following immunization with TCV the incidence of typhoid fever dropped to 72 cases per 100,000 person-years (a statistical way to express incidence rate which take into account the number of people in the study and the amount of time each spent in the study) among participants of the study conducted in Lalitpur, Nepal.

In comparison, the incidence of typhoid fever was 342 per 100,000 person-years for participants given a vaccine against bacterial meningitis (MenA vaccine), instead of TCV. Conjugate vaccines combine weak and strong antigens—substances which cause the body to create an immune response—to increase immunity.

“The protective efficacy of TCV was 83.4 [percent] in the first 12 months of follow-up compared with 73.0 [percent] after the first year,” the researchers reported in their research paper. “There were eight deaths, three in the TCV group and five in the MenA group over the study period.”

They said those who developed typhoid fever despite immunization had fever for a shorter duration, suggesting that the vaccine reduces the severity of the disease, adding: “TCV will not only prevent typhoid fever, as suggested by our study, but might help control of antimicrobial resistance.”

Although typhoid can be treated with antibiotics, increasing resistance to various antibiotics is making treatment more complicated, says the WHO.

Buddha Basnyat, an author of the study and director of the Oxford University Clinical Research Unit, Patan Academy of Health Sciences, Nepal, tells SciDev.Net that “there is now firm evidence to use an effective vaccine against a biblical scourge, typhoid fever.”

“Having a vaccine that is highly efficacious in children will significantly reduce the burden of typhoid,” says Amesh Adalja, senior scholar at the Johns Hopkins Center for Health Security in the US. “These results are promising and show a path forward to better control of typhoid.”

According to the researchers, South Asia is a flashpoint for typhoid fever with an incidence of more than 500 per 100,000 person-years. “Nepal is starting a typhoid vaccination campaign for children in the first quarter of 2022—India, Bangladesh and others should also strongly consider doing likewise to help their citizens,” says Basnyat.