Chlorinated chicken poses ‘no health problems’ and the UK should consider importing it after Brexit, claims senior Government scientist

There is ‘no problem’ with chlorinated chicken and no scientific reason to uphold a ban on it after Brexit, a senior Government adviser has claimed.

In the US some chicken carcasses are washed in chlorine – a chemical used to make bleach – to destroy bacteria which could cause food poisoning.

But chlorine-washing was banned in the European Union in 1997 over concerns farmers wouldn’t try as hard to prevent contamination while the animals were alive.

After the UK leaves the EU it may have the freedom to change its laws to allow companies to start importing the chlorinated birds, which are cheaper to buy.

Sir Ian Boyd, a chief adviser at the Department for Environment, Food and Rural Affairs (DEFRA), said there’s no evidence the cheaper chicken is harmful to people’s health. 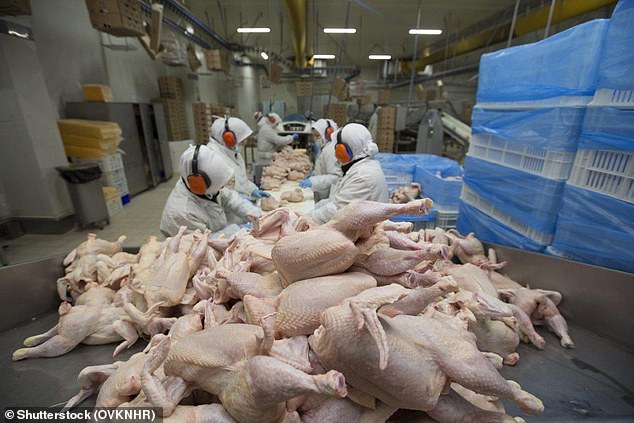 Some meat processing plants in the US rinse chicken carcasses in water mixed with chlorine – which is used to make bleach – in order to kill bacteria which could cause food poisoning, but the practice is banned in the EU because it threatens animal welfare (stock image)

He told Sky News: ‘From a health perspective there really isn’t a problem with chlorinated chicken.

‘The issue is about production processes and animal welfare, and that is a values-based choice that people need to make.

‘My view is that we need to be allowed to make that choice.

‘But it is the job of people like me to make sure that we explain as clearly as possible what the consequences of different choices are for people.’

The possibility of chlorine-washed chicken making it onto UK shelves has sparked heated debate in recent months as farmers say it undercuts animal welfare.

Chicken can cause food poisoning via bacteria such as salmonella and listeria, which are more likely to be present on animals farmed in poor conditions.

Farmers in the UK and EU are required to tackle the problem of bacterial contamination at its root, according to the National Farmers’ Union (NFU).

This involves keeping chickens healthy while they’re farmed and is costlier than battery farming them and disinfecting their bodies after they’re slaughtered.

Therefore, chicken meat from the farms with higher standards is more expensive than what could potentially be imported from more intensive producers in the US.

Chlorine-washed chicken is rinsed in water containing the disinfectant – which is also added to drinking water in the UK – in about 10 per cent of processing plants in the US, according to the National Chicken Council. 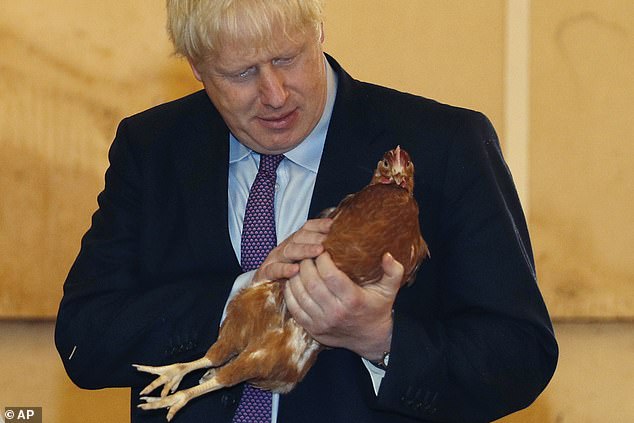 Prime Minister Boris Johnson (pictured on a visit to a farm near Newport, South Wales in July) has in the past said chlorine-washing chicken is a ‘no-brainer’, Sky News reported

A Channel 4 Dispatches documentary in June revealed serious health and safety issues at American chicken plants that want to send meat to Britain after Brexit.

Donald Trump’s administration insists that Britain would be expected to open its shops to American food, including ‘chlorinated chicken’, as part of a free trade deal.

The US government, farmers and processors insist their chicken is perfectly safe.

However, an undercover investigation at a US processing plant operated by America’s biggest poultry producer, Tyson Foods, revealed a series of hygiene issues.

The programme found piles of chicken on conveyor belts for long periods of time, or stacked in a way that could lead to cross contamination; chicken innards on the floor; blocked drains; and supervisors touching raw chicken with their hands.

Ron Spellman, a former meat inspector and current Assistant Secretary General of the European Food and Meat Inspectors Association, said he was surprised at the poor standards.

When asked if he thought these were acceptable standards for British consumers he said: ‘Definitely not, no. Definitely not. This would be a really big step backwards for us.’

Tyson Foods said: ‘Our plants only operate in the continuous presence of US government inspectors who, along with our own food safety staff, ensure we’re producing good food that’s safe to eat.’

In March the NFU president, Minette Batters, said: ‘It is imperative that any future trade deals, including a possible deal with the USA, do not allow the imports of food produced to lower standards than those required of British farmers.

‘British people value and demand the high standards of animal welfare, environmental protection and food safety that our own farmers adhere to.

‘These world-leading standards must not be sacrificed in the pursuit of reaching rushed trade deals.’

In a report published in 2017, members of the House of Lords EU Energy and Environment Sub-Committee said market competition would endanger animal welfare.

The sub-committee wrote in Brexit: Farm Animal Welfare: ‘Our evidence strongly suggests that the greatest threat to farm animal welfare standards post-Brexit would come from UK farmers competing against cheap, imported food from countries that produce to lower standards than the UK.

‘Unless consumers are willing to pay for higher welfare products, UK farmers could become uncompetitive and welfare standards in the UK could come under pressure.

‘It may be hard to reconcile the government’s wish for the UK to become a global leader in free trade with its desire to maintain high quality standards for agri-food products within the UK.’

Prime Minister Boris Johnson has in the past called washing chicken in chlorine a ‘no-brainer’, Sky reported.

And the US’s ambassador to the UK, Woody Johnson, has suggested the products should be included in a post-Brexit trade deal between the two nations.

Sir Ian added he believed hormone-treated beef should also be considered for sale in the UK.

Beef from cattle fed with growth hormones has been banned in the EU because of concerns of links to cancer, but Sir Ian said the amount of hormones used is tiny.

He added: ‘The chances of it having any biological effect on us is almost infinitesimally small.’

Sir Ian is stepping down from his job as DEFRA’s chief scientists after seven years in the role.