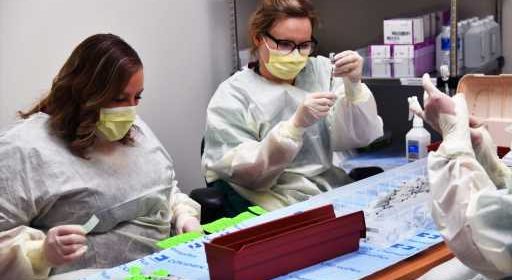 The vast majority of UCHealth’s employees complied with the Colorado health system’s COVID-19 vaccine mandate, but the network did fire more than 100 workers — including 54 in metro Denver — who refused to be inoculated, officials said Monday.

A state mandate, announced in August, gives Colorado health care workers until Oct. 31 to get fully vaccinated or receive an approved medical or religious exemption. But UCHealth imposed its own mandate, with an Oct. 1 deadline.

Out of UCHealth’s 26,500 employees statewide, 119 — or less than 0.5% of the system’s workforce — did not get a COVID-19 vaccine or receive one of the exemptions, spokesman Dan Weaver said in an email.

“Any of those leaving UCHealth employment are welcome — and encouraged — to re-apply for their positions should they decide to get vaccinated against COVID-19 and wish to return,” Weaver said in a statement.

The vaccine mandate has actually improved staffing levels, Weaver said in the statement, since fewer employees are testing positive for the virus.

Denver’s vaccine mandate kicked in Oct. 1, and more than 98% of city employees either got vaccinated or had an exemption approved.

Two surveys in June found about half of unvaccinated workers said they would quit their jobs if the shot was mandated, but most employers who have publicized data about their mandates reported the number who actually quit was about 1% to 2%.

Several factors could be in play: in June, mandates were far less common, making it more likely that an unvaccinated person could get a similar job at a facility that wouldn’t require the shot. A federal mandate unveiled in September requires staff in all health care facilities that receive money from Medicare or Medicaid — almost every facility in the country — to be vaccinated, meaning for most unvaccinated employees the only alternative is to leave health care entirely.

A handful of hospitals, mostly in New York state, reported losing up to 5% of employees, and some have cut back on non-emergency services, though. Smaller and more rural hospitals have tended to struggle more with staffing after shots were mandated, both because of vaccine resistance in their communities and because they lack a deep pool of potential workers.

People who are fired for refusing to get vaccinated are unlikely to qualify for unemployment benefits, though a statement from the Colorado Department of Labor and Employment said the unemployment office would consider individual circumstances, such as why the employer deemed vaccination necessary and why the employee refused.

“Generally speaking, (unemployment insurance) benefits are meant for Coloradans who lose work through no fault of their own,” the statement said. “If being vaccinated against COVID-19 is pertinent for the performance of the job, the employee would likely NOT be eligible for UI benefits.”

Last week, a pediatrician and a student sued the University of Colorado Anschutz School of Medicine over its vaccine mandate, because they objected to the use of cell lines descended from an abortion in the 1970s, which were part of the vaccines’ development. The student’s tuition and fees were refunded, and the doctor is on paid leave pending the outcome of the case, their lawyers announced Friday.

The Civil Rights Act requires employers to accommodate religious beliefs, unless doing so would cause an “undue hardship,” such as interfering with workplace safety or interfering with the rights of other employees. It doesn’t specify what the accommodation must be, though, so employers could reassign unvaccinated workers or put them on leave.

Employers aren’t necessarily obligated to grant a vaccine exemption, though, and legally can ask questions to determine if an employee is sincere in their religious beliefs, regardless of whether they belong to a faith community.

For example, a hospital in Arkansas asked its employees who said they objected because of the cell lines to attest that they don’t take 28 medications that also used fetal cells at some point in their development. The list included common over-the-counter medications like aspirin, Tylenol and Benadryl, according to NPR. None of the vaccines, or the listed medications, contain fetal cells.