The Vaccines Will Probably Work. Making Them Fast Will Be the Hard Part. 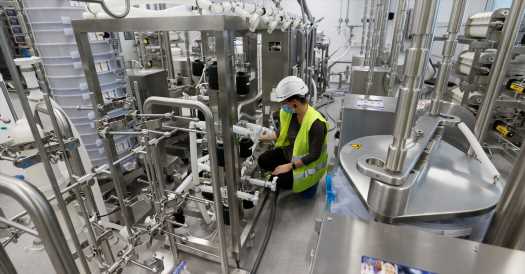 The promising news that not just one but two coronavirus vaccines were more than 90 percent effective in early results has buoyed hopes that an end to the coronavirus pandemic is in sight.

But even if the vaccines are authorized soon by federal regulators — the companies developing them have said they expect to apply soon — only a sliver of the American public will be able to get one by the end of the year. The two companies, Pfizer and Moderna, have estimated they will have 45 million doses, or enough to vaccinate 22.5 million Americans, by January.

That’s a far cry from the 300 million doses that Operation Warp Speed — the federal effort to accelerate vaccine development — set as a goal this year. It reflects just how difficult and unpredictable the manufacturing process has been. Pfizer, for example, said this summer that it expected to make 100 million doses by year’s end, but has now said it can produce only half that goal.

Industry analysts and company executives are optimistic that hundreds of millions of doses will be made by next spring. But the companies — backed with billions of dollars in federal money — will have to overcome hurdles they’ve encountered in the early days of making vaccines. Moderna’s and Pfizer’s vaccines use new technology that has never been approved for widespread use. They are ramping up into the millions for the first time. Other challenges include promptly securing raw vaccine ingredients and mastering the art of creating consistent, high-quality batches.

“The biology of scaling manufacturing is a very temperamental activity, and there were many, many different attempts over the months until we cracked it,” said Paul Mango, deputy chief of staff for policy at the Department of Health and Human Services.

“If that was an aspiration — of 300 million by the end of the year — I would say that was the biggest challenge that we had,” he said. 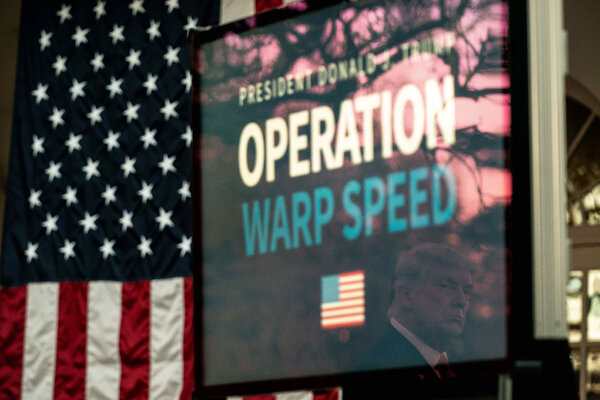 These remarkable feats of scientific and pharmaceutical might have shattered speed records for vaccine development. But the more realistic timelines for manufacturing the vaccines are no surprise to those who closely follow the industry.

“They always used the same four words: In a perfect world,” said Steve Brozak, the president and managing director of WBB Securities in Cranford, N.J., who invests in and researches companies that focus on infectious diseases.

“That world does not exist,” Mr. Brozak said. “Instead, we have a Covid world.”

One of the main goals of Operation Warp Speed was to work with drug companies to manufacture the vaccines even before clinical trials were completed, so that millions of doses would be ready to go if a vaccine was successful — something never before tried at this scale.

But it turns out, it’s a lot easier to make thousands of doses for a clinical trial than to churn out millions a month. Making vaccines is a complex, sometimes finicky process, requiring sterile conditions and precise control of temperature and humidity.

At the same time, the global scramble for vaccines is straining supplies of everything from stainless steel tanks to the custom-made plastic bags that line them.

Adding to the difficulty, Pfizer and Moderna are using a technology, involving genetic material known as messenger RNA, that allows scientists to quickly adapt the technique for new pathogens. But it has never been commercially manufactured.

“Manufacturing a biological product is a science and an art in some ways,” said Prashant Yadav, who studies health care supply chains at the Center for Global Development in Washington.

Moderna, a small Massachusetts company that has never brought a vaccine to market, has been careful in its estimates, predicting since the summer that it would have “tens of millions” of doses by the end of the year, with two doses required for each person to be fully immunized. Moderna has received more than $2 billion from the federal government to develop and manufacture 100 million doses, and the company has said it can supply about 20 million doses before January.

Unlike most of its competitors, Pfizer did not accept federal money to ramp up its manufacturing, instead agreeing to sell the government 100 million doses for $1.95 billion. It has made similar advance purchase agreements with the United Kingdom, Canada and Japan, among others.

Dr. Albert Bourla, Pfizer’s chief executive, has said the company can produce up to 50 million doses by the end of the year, and half of that supply will go to other countries. Because the vaccine requires two doses, there will initially be enough for only 12.5 million of 330 million Americans.

A Pfizer spokeswoman, Amy Rose, acknowledged that the company was falling short of its initial goals, partly because it had to order new equipment and obtain raw materials for the vaccine. In addition, when Pfizer expanded its trial to 44,000 from 30,000 people this fall, the push to make enough vaccine for thousands more volunteers diverted its attention from scaling up commercial production.

The company has since updated its production lines in the United States and Europe, Ms. Rose said, and it is confident in its ability to supply about 1.3 billion doses by the end of next year.

Some companies are developing vaccines that will likely be easier to mass produce than Pfizer’s and Moderna’s, but they have paused their clinical trials for safety reasons.

AstraZeneca said it had manufactured enough of its vaccine to meet its promise of hundreds of millions of doses by January, but a six-week pause in its trial meant that it probably wouldn’t get data on the performance of its vaccine in time to win federal authorization for its use this year.

The company’s chief executive, Pascal Soriot, recently told investors that it would fill the vials once it had a clearer picture of when the vaccine, which requires two doses, could be approved. “As soon as you turn this vaccine into vials, the shelf life starts ticking,” he said.

The vaccine maker Novavax — which had robust results in early studies and said it could supply the world with more than two billion doses next year — had to delay a large clinical trial by at least a month in part because of problems manufacturing tens of thousands of doses needed for the trial. The company has a $1.6 billion deal with the federal government to develop and manufacture its vaccine, which requires two doses.

In a statement, a Novavax spokeswoman said, “There are a number of things that can slow a trial start from the ideal plan, and it’s an immensely complex undertaking.” She said the company was ramping up manufacturing around the world.

Johnson & Johnson, which started its clinical trial in September, later than its competitors, has said it is on track to manufacture 100 million doses of its single-dose vaccine by March and a billion by the end of next year. Its executives have said they do not expect trial results until early next year.

Still, even seasoned manufacturers can experience setbacks. Mr. Yadav, the supply chain expert, pointed to a shortage of flu vaccines in 2004, when a major manufacturer announced that 50 million doses, or half of the national supply for the United States, had been contaminated. “Those are risks that we will have to keep in mind,” he said.

The global race for a vaccine, as well as the pandemic’s disruption of factories and transportation, has severely taxed supply chains, causing delays or shortages for everything from glass vials to syringes.

James Robinson, who serves on the scientific advisory board for the Coalition for Epidemic Preparedness Innovation, which is helping to develop vaccines to supply low- and middle-income countries, says some companies have encountered delays because of shortages of custom-made plastic bags that line the stainless steel bioreactors where the vaccines are produced.

These bags function like the liners that chefs use for their slow cookers. Just like at home, the bags are removed when the batches are done, cutting down on the time needed to clean and sterilize the bioreactors.

But they are difficult to make, requiring their own complex supply chain. Several manufacturing experts said there were now weekslong delays in delivering them.

In October, the federal government awarded $31 million to the manufacturer Cytiva to expand production of vaccine supplies, like the bags and other equipment and ingredients. That was on top of the more than $1 billion the government awarded other supply-chain companies.

As the realities of vaccine manufacturing became clear, some federal health leaders, such as Moncef Slaoui, the chief adviser to Operation Warp Speed, moderated their predictions in the late summer.

But others, including President Trump, did not. He promised in October that a vaccine was only weeks away, and that it would go immediately to the general public. His chief of staff, Mark Meadows, said in September that 100 million doses would be available by October. At the same time, Mr. Trump slapped down some of his top health officials who laid out more realistic timelines.

Once additional vaccines are authorized — especially ones like Novavax that use older, more tried-and-true technologies — factories can begin churning out doses by the tens of millions.

Mr. Mango, of the Health and Human Services Department, says Operation Warp Speed is now estimating that, if several vaccines are authorized by the Food and Drug Administration in the next few months, the United States may have “several hundred million” doses available by the end of March, and then a few months after that, there may be enough for every American to receive a vaccine who wants one.

“Let’s not lose sight of the fact that never in the history of vaccine development has a vaccine been developed at scale in this period of time,” he said.

Mr. Robinson, a former manufacturing executive at companies including Merck, Sanofi and Novavax, said he, too, initially predicted that 300 million doses of vaccines could be ready by the end of this year. Even if that goal has not been met, the speed of development has been remarkable.

“If you don’t stretch for something that is aggressive,” he said, “then you are not going to get your best outcome.”