Experiments have shown that surface coatings have an important role to play in cell movement.

Cell migration experiments will often involve considerations around which surface coatings should be employed in order to effectively culture a particular cell type.

Scientists working in the fields of wound healing, cancer research, and drug discovery will utilize cell cultures as part of vital experiments designed to advance the scientific community’s understanding of biological mechanisms.

Assays for cell migration facilitate the characterization of substances and conditions that influence cell movement; for example, scientists have successfully utilized the Oris™ Cell Migration Assay to identify proteins, antioxidants and mRNA with the ability to inhibit tumor cell migration.

Every cell type requires particular conditions for optimal growth. It is therefore essential to select the most appropriate surface to culture each cell type.

Collagen-coated surfaces are a good option when culturing fibroblasts for cell migration assays, but it is also important to consider whether or not the choice of surface coating will also influence cell migration.

Scientists at Platypus Technologies have recently conducted a series of experiments to show that the choice of surface coating for a cell culture does have the potential to influence the results of cell migration experiments.

Oris™ Cell Migration Assays utilize a 96-well plate with special ‘stopper’ barriers designed to create a central cell-free detection zone for cell migration experiments. Removal of these stoppers will allow cells to migrate into the detection zone at the center of the well.

Scientists conducting this experiment used an HT1080 cell line – fibroblasts that have been isolated from a malignant human tumor. These cells were incubated using Oris™ Cell Migration Assays.

After cell attachment was complete, the Oris™ stoppers were removed to allow cells to migrate into the detection zone. Cells were imaged after 24 hours of incubation without Oris™ stoppers. A range of representative images from this experiment is displayed below:

Visual inspection of these images indicated that cells cultured on collagen I were able to migrate deeper into the detection zone than cells that had been cultured on the other bioactive surfaces. There was no notable difference in the migration of the cells cultured on tissue culture, fibronectin, poly-l-lysine or BME.

The graph below displays these measurements, which confirm that the HT1080 cells exhibit higher migration rates in Collagen I than in other surface coatings. 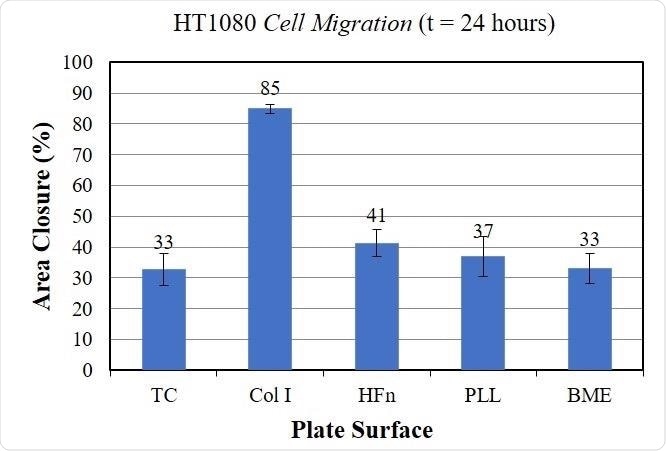 The choice of surface coating was found to have a considerable impact on the cell migration of HT1080 cells. Cells cultured in collagen I exhibited the fastest rate of cell migration when compared to cells that had been cultured on other surfaces.

Overall, these results confidently demonstrate that the choice of surface coating has an important role to play in cell migration measurements.

This information has been sourced, reviewed and adapted from materials provided by Platypus Technologies, LLC.