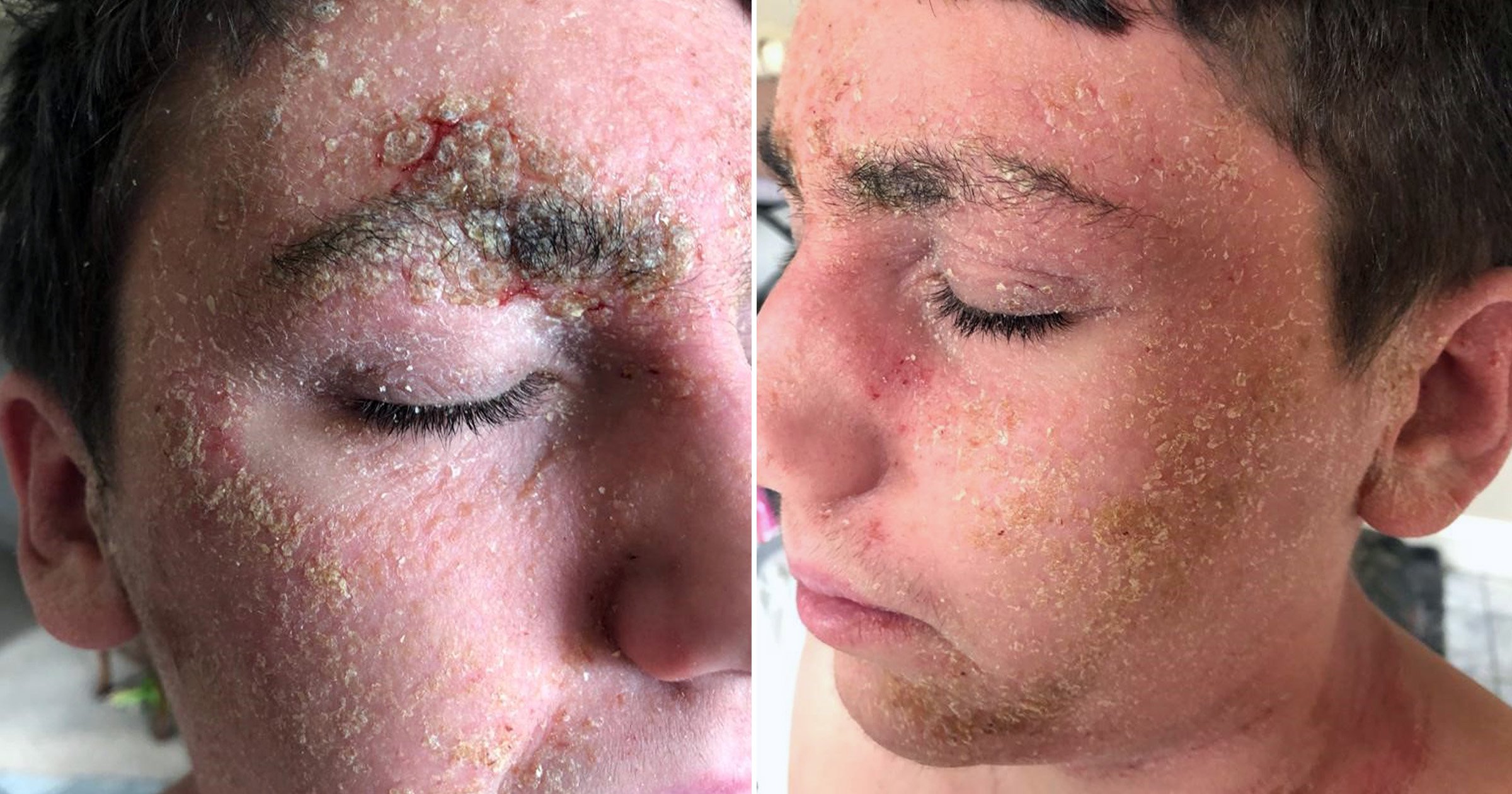 A desperate mum is trying to find a cure for her teenage son’s crippling eczema.

Miranda Rae wants to help her 14-year-old son Barney – who has the condition so bad that he’s asked to be placed in an ‘induced coma.’

Barney says his skin constantly feels like it’s on fire and is so itchy that he often scratches himself until he is covered in blood.

The teen, who is due to start Year 10 this month, also finds it excruciating to wear school uniform.

Single mum Miranda has even tried to bandage Barney’s body, but he rips these off as he sleeps.

The 50-year-old, from Bristol, says: ‘One night he came into my room and was bleeding from head to toe.

‘He was shaking and said “I can’t believe I’ve done this to myself.”

‘Now he’s terrified of sleeping because he ends up scratching when he’s asleep.

‘He’s bleeding with cuts and puss all the time. It’s constant, there’s no second of relief.’

Barney has suffered with eczema since he was four years old – but last October his condition deteriorated.

Miranda adds: ‘The worst thing was when he said he wanted to be in an induced coma because the pain was so bad.

‘I have to keep telling him “it’s not your fault.”

‘He has no life. His life has been crippled. Even wearing clothes hurts for him. He can’t even put water on his skin because it feels like fire.

‘He can’t do any sport because he can’t sweat.

‘It’s heartbreaking to see him go through this. I would do anything to fix this.’

Sadly doctors haven’t found an effective treatment for Barney’s condition and now his eczema has spread to his face.

Radio presenter Miranda said: ‘After taking the new medication it looked like he’d had acid thrown in his face.

‘We must have tried 50 different creams in the last year and every single one was like fire on his skin.

‘We’re in this horrible position where nothing is working.

‘You can see it’s really got to him but he’s brave and I’m incredibly proud of him.’

Currently Barney is on a daily dose of a steroid called Prednisolone – but it has strong side effects, such as weight gain, which means it’s not sustainable.

The steroid has reduced the eczema on Barney’s face but Miranda says he’s totally reliant on the drug and still has a severe rash on his neck.

He also takes Dupilumab, a £24,000-a-year drug prescribed by the NHS, but it’s yet to prove effective.

Now Miranda is fundraising £20,000 for private treatment to properly diagnose Barney’s condition and to find him a cure.

So far, she’s raised £13,000 – some of which was used to buy an air conditioning unit for Barney for the hot weather, when his condition worsens.

More information on the fundraising page can be found here.