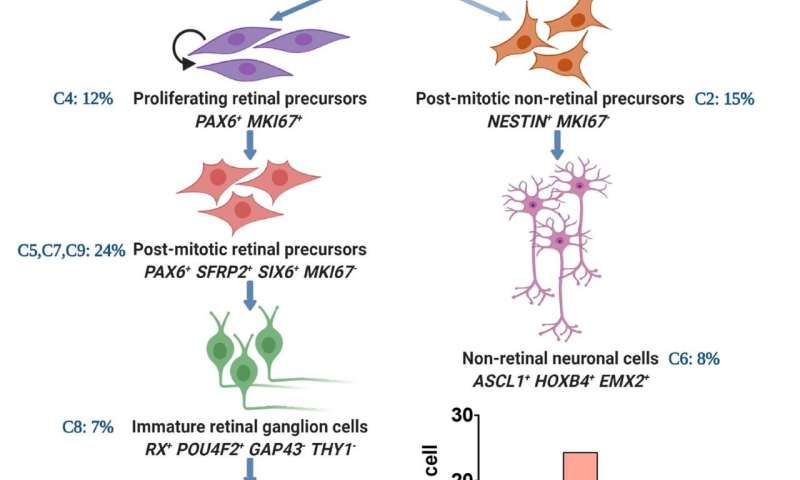 Millions of sufferers of glaucoma might someday benefit from a study released today in Stem Cells in which a ‘disease in a dish’ stem cell model was used to examine the mechanism in glaucoma that causes retinal ganglion cells (RGCs) to degenerate, resulting in loss of vision. The knowledge the study provides could result in new therapeutic approaches for this leading cause of blindness worldwide.

RGCs are a group of nerve cells located in the retina that send images to the brain and enable you to see. Glaucoma attacks these cells and, once they die, they are not replaced. However, why and how glaucoma causes the RGCs to degenerate is something of a mystery.

Stem cell modeling of the disease may shed light on this. Over the past decade, significant progress has been made using induced pluripotent stem cell (iPSC) technology to mimic glaucoma. This includes the generation of human RGCs from iPSCs, which led to the development of a disease model for primary open angle glaucoma (POAG)—the most common form of glaucoma—as well as an optic nerve model that demonstrated the supportive role of mTOR signaling in the regeneration of hRGC axons following chemical axotomy.

“However, both these models can be improved by characterizing the developmental trajectories of control and disease-specific RGCs,” said Iqbal Ahmad, Ph.D., of the University of Nebraska Medical Center. He and his UNMC colleagues, Pooja Teotia, Ph.D., and Meng Niu, Ph.D., conducted the study reported on in Stem Cells.

Dr. Ahmad continued, “This characterization includes the generation of hRGCs through normal developmental time and stages containing a complement of different subtypes, against which the developmental aspects of RGC abnormality in a disease model can be evaluated. Information about different RGC subtypes is not only important from a functional viewpoint, but also for understanding the underlying mechanism of glaucomatous degeneration, given the emerging evidence that the susceptibility and resistance of RGCs are subtype dependent.”

In developing their model, the researchers used a single cell transcriptome analysis of human RGCs generated from normal (controls) and SIX6 risk allele iPS cells. (Previous studies have identified a significant association between POAG and SIX6, a gene that plays a role in ocular development.)

They observed that the developmental trajectories, beginning from neural stem cells to RGCs, were similar between SIX6 risk allele and control RGCs.

“However,” Dr. Ahmad said, “we observed that the differentiation of SIX6 risk allele RGCs was stalled at the retinal progenitor cell stage, keeping them immature and deficient in subtype composition, compared to the controls. This was likely due to dysregulated mTOR and Notch signaling pathways that play an important role in RGC development. Furthermore,” he added, “SIX6 risk allele RGCs, as compared to controls, expressed fewer genes corresponding to RGC subtypes that are preferentially resistant to degeneration.

“The immature phenotype of SIX6 risk allele RGCs with under-represented degeneration-resistant subtypes, may make them vulnerable to glaucomatous degeneration,” he concluded.