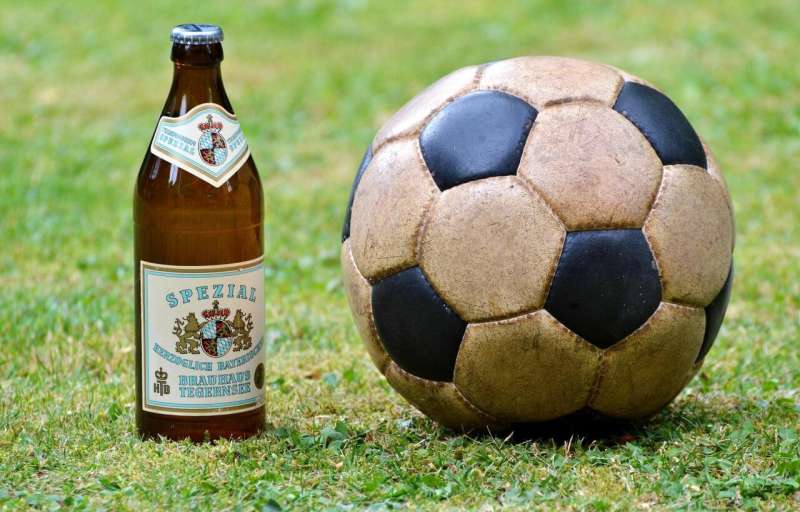 Easing legal restrictions around the sale and consumption of alcohol at U.K. football stadia could deliver public safety and financial benefits, but is not without risks, according to key stakeholders interviewed as part of a new University of Stirling study.

Under current legislation, football supporters in England are permitted to purchase alcohol at stadia—but it cannot be consumed within view of the pitch, while in Scotland, the general sale of alcohol is prohibited, other than in hospitality settings.

The new study considered the existing laws in focus groups with regular match-attending supporters, casual supporters who usually watch games at home or in bars, and those who follow the Scotland and England national teams. Researchers also engaged a range of stakeholders in interviews—including representatives from the U.K. and Scottish Governments, police, football supporters’ groups and safety organizations.

Many stakeholders felt that there were unintended consequences arising from the current laws, such as fans arriving late to games in large numbers in Scotland and fans binge-drinking at half-time in England; and that it would boost revenues for clubs if current restrictions around the sale of alcohol were eased. However, several stakeholders felt that “a break in drinking” on matchdays was positive, and that any easing would present a significant risk, as greater alcohol sales would mean continuous and higher alcohol consumption by some fans.

Funded by the Economic and Social Research Council (ESRC), the research team—comprising academics from the Institute for Social Marketing and Health (ISMH) at Stirling, Loughborough University, and the University of Edinburgh—found most participants were in favor of easing existing laws as part of pilot schemes. In England, this could permit alcohol consumption within view of the pitch, and, in Scotland, the general sale of alcohol in football stadia. However, the details of exactly what would be permitted and how any pilot would operate and be evaluated requires careful consideration, the study’s authors say.

Dr. Richard Purves, a senior research fellow at ISMH who led the study alongside colleague Jack Martin, urges similar caution: “These restrictions have been debated in the U.K. for more than 40 years, however, research into the current attitudes of supporters and influential stakeholders is lacking. We found that some stakeholders felt that there may be some benefits to public safety and football club finances if changes were made. Most participants from England suggested that preventing alcohol consumption in view of the pitch could be changed, while in Scotland, most participants were in favor of allowing the general sale of alcohol at football stadia via a pilot scheme. There were mixed views from the police, however, with leading police officers in England and Wales expressing significant concern about any easing of restrictions there.

“Police concerns were largely about public safety, however there would also be public health concerns about permitting more widespread alcohol consumption in venues popular with children and young people. Any pilot schemes should be subjected to full independent academic evaluation, considering the longer-term implications of such normalization and higher consumption by fans, as well as immediate safety and economic implications.”

Jack Martin, Research Fellow at ISMH and first author on the paper, added: “Supporters suggested future approaches could include limits on the quantity or strength of alcohol that could be purchased, or maintaining restrictions in family areas, though such measures may be challenging to implement in practice.”

Alcohol consumption has been restricted at football stadia in Scotland since 1980 and in England since 1985, following several instances of violence at high-profile matches. Existing legislation on alcohol consumption in U.K. football stadia is defended on the grounds of maintaining public order and minimizing the risk of violence, however, other sports—such as rugby, darts, horse racing and cricket—continue to allow fans to purchase and consume alcohol within view of the action.

The Crouch Report—a fan-led review of football governance in England, published by the U.K. Government last year—recommended a review into whether legislation governing alcohol and football is fit for purpose and proposed a small-scale pilot allowing alcohol consumption in view of the pitch in lower leagues. Meanwhile, in Scotland, accountancy firm Deloitte has been commissioned by several Premiership clubs to undertake a review of the league’s sources of income to identify additional revenue sources, which may include consideration of the sale of alcohol.

The Stirling team conducted focus groups with 79 supporters of professional football clubs in Scotland and England, as well as fans of the national sides, and interviewed 15 key stakeholders.

Stakeholders felt the legislation was brought in solely as a response to high-profile incidents of violent behavior at football matches and were skeptical about its effectiveness—with most participants expressing that at least some elements of the current laws need changed. Supporters Direct Scotland reasoned that society, football in general and stadia have all changed and improved since existing laws were introduced—a view shared by a senior football executive from England, who said the treatment of football fans today is based on the actions of those in the past. A representative from the Department of Culture Media and Sport also supported a review.

None explicitly discussed broader public health principles—that the greater availability of alcohol is strongly linked with greater consumption and harms across multiple studies—but several did consider that any changes could lead to more drinking by some fans. The Police Football Lead in England and Wales raised concerns, saying changing legislation “presents a significant risk,” while a U.K. Football Policing Unit representative said: “I think they’re [existing laws] there for a reason and for me, there is no evidence to suggest that they are not valid.”