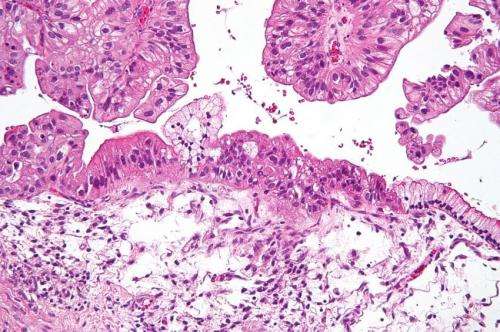 A Ludwig Cancer Research study has uncovered a cellular interaction that is essential to the ability of the immune system’s cytotoxic T lymphocytes to destroy ovarian tumors and shown that its engagement could help determine the efficacy of checkpoint blockade immunotherapy in a variety of cancers.

The study, led by Ludwig Lausanne Director George Coukos and published in the current issue of Cancer Cell, describes how infiltrating T lymphocytes (TILs) that are best able to kill cancer cells reside in islets within ovarian tumors. These islets additionally house immune cells known as antigen presenting cells (APCs). Coukos and his team show in cell culture and mouse experiments that the APCs, which help direct TILs to cancer cells and support their activity, stimulate a protein known as CD28 on TILs to boost and sustain their functionality. When treated with anti-PD-1 checkpoint blockade antibodies—which disengage brakes imposed on TIL function—it is this interaction that “licenses” TILs to destroy tumor cells.

“Knowing what TILs need to sustain an immune attack on tumors and what brings them to that state opens a window for new therapeutic approaches to ovarian cancer, as well as a number of other cancer types, that have long resisted immunotherapy,” said Coukos.

A study led by Coukos in 2003 first reported that ovarian cancers infiltrated with the most TILs are associated with the longest survival times for patients. Yet the cancer, like most others, has also proved relatively resistant to anti-PD-1 checkpoint blockade immunotherapy.

Exploring this phenomenon, Coukos and his team profiled TILs from samples of high grade serous ovarian cancer (HGSOC), the most common and aggressive form of the disease. They found that the most effective anti-tumor TILs were in islets within the tumors, not in their periphery. TILs in these tumors, they show, exist across a spectrum of states—from activated and poised for attack through to various degrees of exhaustion to terminally exhausted, a state of permanent ineffectuality.

Microscopy and molecular analysis revealed that TILs best able to attack tumors engage in a two-way association within the islets—engaging cancer antigens with their specialized receptors, on one hand, and APCs like dendritic cells and macrophages on the other.

“Our findings explain why the presence of TILs, especially within tumor islets, has long been associated with better prognoses for patients with ovarian cancer,” said Coukos. “Furthermore, they show that CD28 co-stimulation of T cells by APCs is not an exclusive affair of the lymph nodes, but occurs also in the heart of the tumor, within the tumor islets, where T cells engage the tumor cells for destruction. We believe that this interaction is key for sustaining successful immune attack and shows for the first time in human tumors that successful T cells are not alone, but rather supported by myeloid niches.”

The researchers further found that the most capable TILs also express the PD-1 molecule, which imposes a brake on their tumor-targeting activity. That brake is disengaged by anti-PD-1 checkpoint blockade. But the ferocity and durability of the TIL attack following such treatment is heavily dependent on their association with APCs.

Studies revealed that APCs activate the TILs in these islets by engaging CD28. In fact, the ability of PD-1 blockade to activate TILs appears to depend on their concurrent co-stimulation via CD28.

These findings could have relevance beyond ovarian cancer. The researchers identify a signature of gene expression associated with effective TIL activation in ovarian tumors and show it is also associated with cancers known to be more responsive to anti-PD-1 immunotherapy, such as melanoma and non-small-cell lung cancer. Conversely, the signature is less common in tumors that are unresponsive to this therapy, such as those of colon cancer. Further, a separate gene signature reflective of APC activation in the tumors is associated with positive responses to checkpoint blockade in a variety of tumor types.

Coukos and his colleagues also found that anti-CTLA-4 immunotherapy, which targets a separate brake on T cells, enhances anti-PD1 immunotherapy by permitting the stimulation of CD28 on the TILs. Taking this finding a step further, they showed that adding a stimulator of APCs, known as CD40L, in combination with anti-PD-1 and anti-CTLA-4 blockade restored the anti-tumor activity of unresponsive TILs in cell cultures.

Testing this approach in studies on mice implanted with ovarian tumors, the researchers demonstrated that a combination of the three therapies resulted in much better tumor control in the mouse model than did either single or dual therapy.