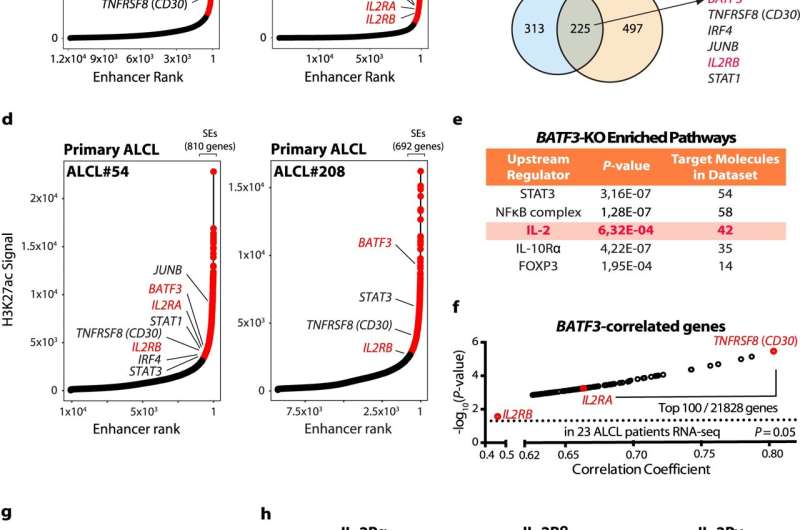 The anaplastic large cell lymphoma (ALCL) is a type of leukemia that occurs primarily in children and young adults. An international team of researchers with significant involvement of MedUni Wien has now been able to demonstrate that the transcription factor BATF3 and its target genes play a key role in the growth of the tumor cells. The findings of this study, currently published in Nature Communications, can be used as an approach for the development of new therapies.

The malignant lymphoma is the most frequent form of lymphatic cancer and develops if lymphocytes divide uncontrolled. Differentiation is made between the Hodgkin lymphoma (HL) and non-Hodgkin lymphomas, which also include the less frequent anaplastic large cell lymphomas (ALCL), a malignant T-cell lymphoma, which particularly affects children and young adults. Chemotherapy is used as the standard therapy, but relapses often occur.

BATF3 as key transcription factor for the signal transfer at ALCL

A group of researchers of MedUni Vienna around Olaf Merkel and Lukas Kenner (also at the University of Veterinary Medicine Vienna) of the Clinical Institute for Pathology, and institutional collaborators have now examined the role of the transcription factors BATF3 in case of ALCL. Its elimination in ALCL tumor cells had an enormous effect on the cell growth, which indicates that it is an important protein in this illness. The interest of the researchers in BATF3 was inspired by these findings and the profound illness-specific expression of BATF3.

Among others, the group around Stephan Mathas had been able to demonstrate in earlier cooperation projects that the AP-1 family of transcription factors, among them JUNB, cJUN as well as BATF3, is severely expressed in ALCL. In view of the significance of BATF3 for the illness and its high expression, the researchers assumed that it could be located in a so-called super-enhancer region of the genome. Super-enhancers are areas in the genome that are significant for gene regulation and cell identity. The genome-wide analysis of H3K27-histon acetylation executed together with the laboratory of Tom Look in Boston confirmed that BATF3 is indeed located in a super enhancer region in all analyzed cell lines, and importantly also in primary ALCL patient samples.

Furthermore, the researchers conducted a genome-wide binding test for BATF3, a BATF3 ChIP, and ascertained that BATF3 binds to its own promotor and thus generates a positive feedback loop. “While we observed the genes, whose expression was altered by a BATF3-knock-out, the genes of the IL-2R system were among the most conspicuous,” explains Olaf Merkel, “which prompted us to closely examine the members of the trimeric IL-2 receptor in terms of expression and function.”

The researchers determined that all three sub-units of the IL-2R complex in ALCL are severely activated and that IL-2R alpha and -beta are direct targets of BATF3. “IL-2 is the most important interleukin released after the activation of T-cells,” explains Merkel, “and we were able to demonstrate that IL-2 was able to promote the growth of ALCL tumor cells. The view that IL-2 has an essential function for ALCL growth is supported by the high activation of all three IL-2 receptor subunits in more than 80 percent of ALCL patients, which, together with the functional analyzes, indicates the high importance of IL-2 signaling in ALCL.” Another closely related cytokine known to share two subunits with the IL-2 receptor is IL-15. The researchers were able to show a growth-promoting effect on the ALCL cells here as well.