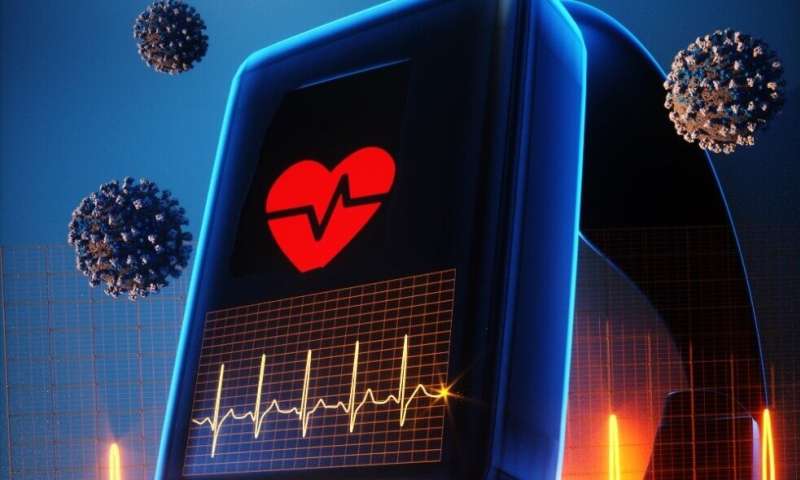 Researchers at the Stanford University School of Medicine have developed a smartwatch app designed to alert users when their bodies show signs of fighting an infection, such as elevated heart rate.

The app is powered by an algorithm that detects changes in an individual’s resting heart rate and step count. A study of retrospective data found that the app was able to correctly flag signs of COVID-19 before symptoms arose, or as they arose, 63% of the time. The missed cases could be due to a few factors, said Michael Snyder, Ph.D., professor and chair of genetics. Some medications can cause variable heart rates, making it difficult for the algorithm to detect a stable resting heart rate. Other factors, such as extended air travel, menstrual cycles and time in a high-altitude region, can trigger alerts.

Snyder and his team are ready to move beyond the pilot phase of the research and refine the accuracy of the app. They are now making the algorithm, which notifies users of possible infection through “yellow” or “red” alerts, available to as many as 10 million new users. It’s important for users to note, Snyder said, that the algorithm cannot yet decipher COVID-19 from other infections, like a garden-variety cold, so even a red alert does not necessarily mean a COVID-19 infection.

The algorithm will initially be available on Fitbit devices. Later, the researchers plan to make it available on an array of smartwatches and devices that can track heart rate.

The point of the alerts, said Snyder, is not simply to tell you when you’re sick but to flag the early, covert signs of illness before noticeable symptoms appear. During the pandemic, such alerts would let users know that they may need to quarantine and prompt them to get screened for COVID-19. The app can detect illness up to 10 days before symptoms appear.

“Detecting signs of infection before symptoms set in would be an enormous asset to public health, as a number of COVID-19 transmissions are suspected to have come from asymptomatic individuals or those with mild infection,” said research scientist Tejaswini Mishra, Ph.D. “Individuals whose heart rate signatures indicate infection—COVID-19 or not—can be alerted to self-isolate.”

Snyder and his team launched the study in March, recruiting participants to see whether the algorithm could identify those with an infection at or before symptom onset using just the data from a Fitbit smartwatch. Of more than 5,000 participants, 32 were confirmed to have COVID-19. In 26 of those cases, the scientists saw a spike in resting heart rates during infection—one that was long enough to rule out temporary increases due to exercise or temporary stress. They also saw that infected individuals walked an average of 1,440 fewer daily steps and slept 30 minutes longer than those who were virus-free. Buoyed by this data and data from other studies, the team trained an algorithm to send alerts to users that would let them know if their body seemed to be infected.

“We created a tiered alarm system that sends alerts in real time,” Snyder said. “Yellow means something’s up, and the person should start sheltering in place. If you get a red alert, that’s basically saying you’re undergoing a significant stress. If you know the reason, like high altitude or too much alcohol, you can ignore it, but if you’re not doing anything unusual, you may be fighting off some foreign microbe and want to self-isolate and perhaps seek out a COVID-19 test.”

The team will recruit participants for the second phase of the study with the goal of reaching 10 million users and refining the algorithm to increase its ability to detect signs of COVID-19 in real time.

“We’re determined to reach as many people as we can,” Snyder said. “There’s no single solution that will turn the tide against COVID-19, but a device that could ping you when your health seems iffy would be a huge step in curbing transmission rates and easing the burden on our health care systems.”