Air turbulence from coughs and sneezes can cause Covid-laden water droplets to travel at ‘near-ballistic speeds’ and spread virus much further than originally thought, study finds

Turbulence can cause small pockets of air carrying COVID-19-laden droplets to spread the virus further than the expected six feet, a new study finds.

Researchers from the University of Florida and Lebanese American University (LAU) carried out computer simulations to test how particles of the virus would travel through the air when ejected together within a cough of sneeze.

Each volume of air ejected by the cough or sneeze was called a ‘puff’.

While a majority of particles would very close to the puff, turbulence in the air would shoot some particles to shoot from the puff at ‘near-ballistic speeds’, traveling further than six feet that most social distancing guidelines recommend.

The research, which will be published in the Physics of Fluids on Tuesday, comes as part of a bevy of studies about coronavirus, how it spread and where it came from as the pandemic nears its end in the U.S. 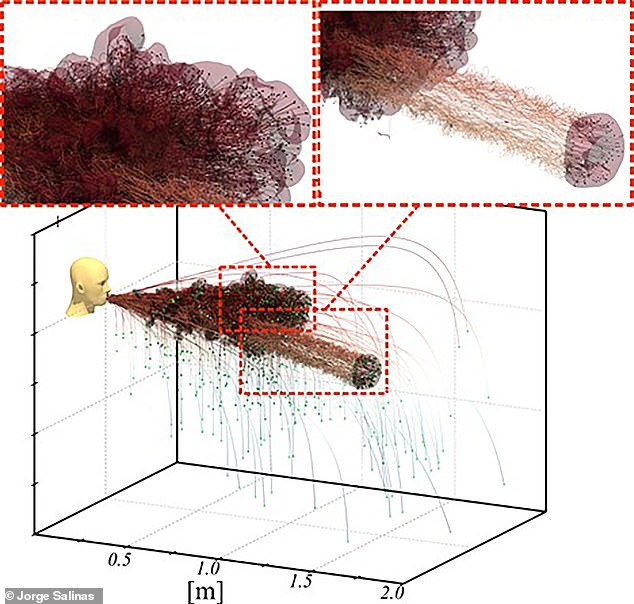 Researchers built a simulation of how exhaled COVID-19 particles could move after a cough or sneeze. They found that bigger particles could shoot out on their own, creating a second particle puff that travels further than others

In simulations, researchers found that majority of coronavirus particles stay within the puff after being exhaled by a person through a cough or sneeze.

Bigger particles will often come out at very fast speeds, however.

The bigger particles would often travel further than the puff would, and drag a few of the smaller particles that would rotate outside of it along with it, creating its own smaller ring shaped puff cloud.

‘One of our interesting findings was that a small portion of the puff of air could detach,’ said co-author Dr Nadim Zgheib, an engineering professor at LAU.

‘The detached portion resembles a vortex ring-like structure and advances at relatively quickly along a direction that deviates slightly from the flow direction.’

The travel patterns of this detached puff are incredibly hard to predict, as they could end up launching anywhere for a long distance depending on how it was launched, and conditions in the environment like wind.

Smaller, ring shaped, puffs can also travel far beyond the six feet standard used for social distancing across the world.

The ring shape of the puff could also allow for the particles to spread further than they would have otherwise. 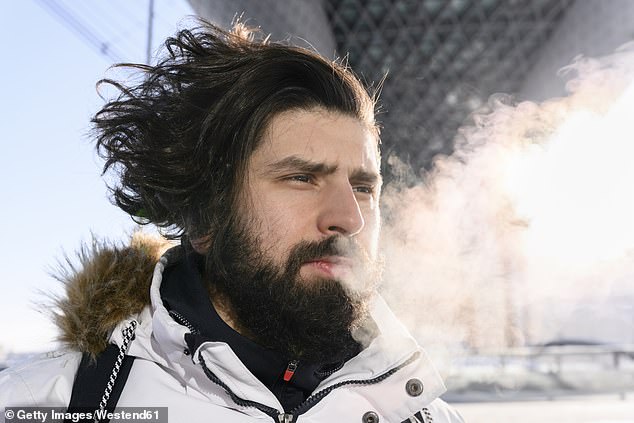 As an airborne virus, Covid primarily transmitted from person to person through exhaled particles in the air

The research builds on previous research as to how the virus spreads in the real world, and how outside factors could effects its spread.

A Cyprus based team, for example, discovered the tree pollen could have assisted with the spread of the virus after they noticed areas with higher pollen counts were experiencing higher transmission of the virus.

After reaching highs over the winter, the United States has largely gotten it’s COVID-19 situation under control.

Currently, the country is averaging less than 80,000 new cases a week, a sharp decline from the over 250,000 a week the country experienced at the peak of the pandemic.

The U.S. also has not recorded more than 1,000 deaths in a single day in almost three months.