A jab which could protect peanut allergy sufferers from potentially deadly reactions has moved one step closer.

Scientists at Stanford University in California trialed the experimental injection on 20 patients.

Almost three quarters of volunteers given the etokimab jab could eat the equivalent of an entire nut a fortnight later.

And after six weeks, slightly more than half of patients could eat the same amount without suffering a life-threatening reaction. 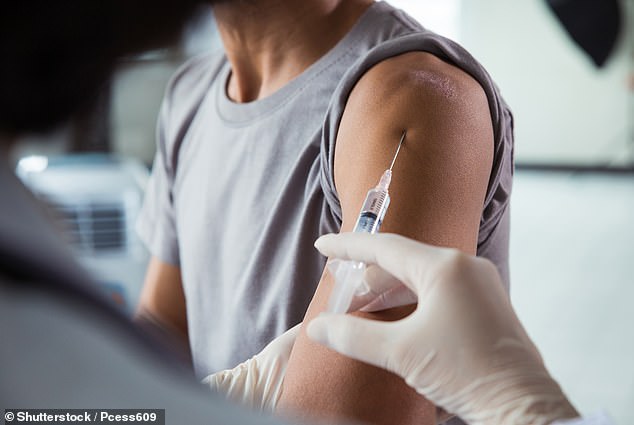 One antibody injection can protect some peanut allergy sufferers from reactions for up to six weeks, a study has found (file)

Peanut allergies among children have tripled since 1997, with around one in 100 people in the UK and US having the the condition.

Just 100mg of peanut protein, the equivalent of a third of a kernel, can trigger a severe reaction.

Reactions usually cause symptoms like sneezing, itchy eyes and hives. In rare cases, they can trigger anaphylaxis.

This can be deadly, with symptoms including swelling of the throat, difficulty breathing and loss of consciousness.

Etokimab, which is still being trialled, offers a ray of hope for sufferers. There is currently no cure and only limited treatments.

WHAT IS A PEANUT ALLERGY? AND HOW COMMON IS IT?

Under clinical guidelines in the US, parents are advised to introduce peanuts into a baby’s diet ‘as early as four to six months’.

In the UK, parents are advised to give children crushed up peanuts from around six months, if there is no history of allergies in the family.

Peanut allergies among children have tripled since 1997, according to a study by the Jaffe Food Allergy Institute at New York’s Mount Sinai hospital found last year. Around one in 100 people in the UK and US has a peanut allergy.

The allergy occurs when the immune system mistakenly treats three types of peanut protein (Ara h1, Ara h2 and Ara h3) as a threat, when it comes into contact with them.

Their body then releases chemicals to destroy what it perceives as a dangerous invader. This rush of chemicals triggers symptoms of an allergic reaction, often within seconds.

These range from an itchy mouth to anaphylactic shock, where the airways narrow, blood pressure plummets and organs start to shut down.

Sufferers who have had severe reactions usually carry an EpiPen device to give themselves a shot of adrenaline if another reaction occurs.

This opens up the airways and dilates blood vessels to force blood pressure back up.

Immunotherapy is the only prevention option patients are offered – through clinical trials because it is not yet available on the NHS.

It requires them to eat tiny, gradually escalating doses of peanut to build up tolerance.

Desensitising someone to their allergens using this technique takes six months to a year, and can cause allergic reactions along the way.

Fifteen of patients in the latest study – who all had severe peanut allergies – received a single injection of etokimab.

Five others received a placebo. Neither group was told which they were being injected with.

In the etokimab group, 73 per cent could eat 275 mg of peanut protein – one nut’s worth – without an allergic reaction. No placebo recipients could do so.

At day 45, 57 per cent in the etokimab group passed the food challenge without a reaction. No participants in the trial reported side effects.

Senior author Professor Kari Nadeau said: ‘What’s great about this treatment as an option for food allergies is that people did not have to eat the food to get desensitised.

‘Although this is still in the experimental stages, we’re delivering on the hope of testing a drug that won’t be for one food allergy but for many, and for other allergic diseases, too.

‘We were surprised how long the effects of the treatment lasted.’ The findings are published in The Journal of Allergy and Clinical Immunology.

Etokimab interferes with the action of interleukin-33, an immune-signaling molecule which marks the start of an allergic reaction.

In people with a peanut allergy, any exposure to the nut causes IL-33 to activate a second immune actor, immunoglobin E.

In essence, the researchers said activating IL-33 in someone with a food allergy is like a touching a match to a big pile of tinder.

But the antibody treatment has the effect of plunging the match into a bowl of water, Professor Nadeau said.

The study comes weeks after researchers decisively concluded that immunotherapy pills can protect from peanut allergy but not cure the condition.

Scientists from King’s College London (KCL) were able to reduce patients’ sensitivity to the nut but could not get rid of the allergy altogether.

The pills are packed with minuscule amounts of peanut to train the body into producing antibodies to fight the allergen.

WHAT IS ANAPHYLACTIC SHOCK?

Anaphylaxis, also known as anaphylactic shock, can kill within minutes.

It is a severe and potentially life-threatening reaction to a trigger, such as an allergy.

The reaction can often be triggered by certain foods, including peanuts and shellfish.

However, some medicines, bee stings, and even latex used in condoms can also cause the life-threatening reaction.

According to the NHS, it occurs when the immune system overreacts to a trigger.

It is considered a medical emergency and requires immediate treatment.

Insect stings are not dangerous for most victims but a person does not necessarily have to have a pre-existing condition to be in danger.

An incremental build-up of stings can cause a person to develop an allergy, with a subsequent sting triggering the anaphylactic reaction.